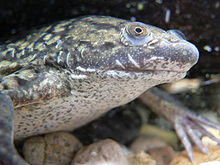 Lateral line organs are skin sensory organs in "lower vertebrates" (anamnia) and are used for exteroception (external perception) in the water. Nearly all fish and permanently aquatic amphibians (such as frogs or Olme ), amphibian larvae and salamanders during the water stay feature sidelines organs. In amniotes (reptiles, mammals, birds) they are always absent. The sense cells are hundreds to thousands along the length of the body and in a plurality of lines on the head applied (originally only here). In many fish they are recognizable as a line of pores (= lateral line) on the long sides of the body, hence the name. The perception mediated by the lateral line organ is also known as the sense of remote touch . Adequate stimuli are pressure waves that arise in a tube system when another fish or something similar swims by.

There are different construction principles for lateral line organs, including the Lorenzini ampoules and the neuromasts .

Lorenzini ampoules are gelatin-filled ducts that penetrate deep into the skin and at the ends of which nerve cells sometimes grow into the ampoules. In addition to pressure, the ampoules can also receive cold and chemical and electrical stimuli. Adequate stimuli are weak currents that arise, for example, during the muscle activity of prey.

The neuromast cells consist of hair cells that have one or more immobile cilia . These are finger-shaped structures that are encased in jelly (the cupula) and protrude into the open water. The side of the hair cells facing away from the water is attached to nerve cells that pick up the signals when the cilia are bent by an external stimulus.

During evolution , the lateral line organ has transformed into electroreceptors in some fish. These are partly used for geomagnetic navigation . The migrating fish can orientate themselves in this way on the earth's magnetic field .

A row of pores runs over the body on both flanks. These pores lead into a channel that is just below the skin. In this channel, which is filled with a gelatinous mass, protrude many sensory cells, each with a long kinocilium and many microvilli . These are surrounded in clusters by a protective membrane, the cupula. The gelatinous column in the canal is vibrated by water pressure waves, whereby the extensions of the sensory cells are bent in certain directions.

Without this gelatinous column, water would flow into the canals and distribute itself in the flow directions that have nothing to do with the direction of the water pressure waves. But as it is, the gelatinous column is pressed forwards, backwards, upwards, downwards and at the same time towards the sensory cells with different intensities. As a result, the fish perceives the finest changes in flow and water pressure waves, such as those caused by a swimming enemy or an obstacle (sense of remote touch).

Schooling fish such as sardines use the lateral line organ to protect against predators: the fish form a huge school that behaves like a single large fish. Every small change in movement of the neighboring fish leads to the same in the others, since even the smallest pressure differences are felt.