The natural distribution is limited to Africa south of the Sahara . The focus is on Angola , Namibia , Swaziland , Malawi and Zimbabwe . Due to decades of massive use as laboratory animals (formerly as an indicator organism for pregnancy tests, today in developmental biology; see below) and for the pet trade, the animals have become popular in large parts of the southern USA and in some cases even in Europe settled in the field. The adaptable clawed frogs prefer to stay in pools and other warm, mostly stagnant bodies of water.

As an aquarium animal in human care, this amphibian can often be found, as it is very popular due to its aquatic way of life and its simple keeping.

Appearance and way of life

The smooth-clawed frog has a flat head and a streamlined body, which in female specimens is about 10 to 13 centimeters long - males remain significantly smaller. The back color is predominantly olive-brown and the belly and the inside of the thighs are mostly light-beige with numerous, irregularly distributed, small pigmentations. The little developed front legs each have four long fingers without webbed feet (in contrast to the dwarf clawed frogs ). The noticeably muscular hind legs each have five toes, the three inner ones with strong, black horn claws that give the species its name. There are large webs between the toes that extend to the tips of the toes. These frogs are excellent swimmers who can achieve amazing speeds even underwater by rowing and pushing quickly with their hind legs. 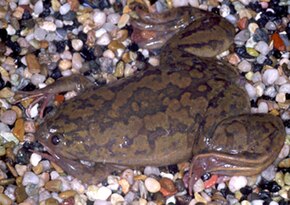 As with most amphibians , color variants are also present in this species. The small, round eyes are directed upwards and immediately detect every movement that takes place above the surface of the water. The clawed frog's skin is so smooth and slippery that it can hardly be grasped with your bare hands. Despite the purely aquatic way of life, it is a lung-breathing animal; only the tadpoles have gills.

The frog, which can live to be around 15 to around 25 years old, lives constantly in calm waters, which it only leaves by necessity, such as when it is dehydrated or if there is a lack of food. It is predominantly crepuscular and nocturnal. The males call under water in a dark voice ("gra-gra-gra" or "kreik-kreik"). The females grow up faster and are accordingly sexually mature earlier than the males. You can recognize them by the fact that they are a quarter larger than the male specimens at the same age. In addition, only they have three lobed appendages on the cloaca . During the spawning season, the males have clearly visible, dark oestrus calluses on the inside of the arms. Like all species of the Mesobatrachia (and also the Archaeobatrachia ), they clasp the females in the groin area - one speaks of an inguinal amplexus .

During the spawning act, which can drag on for up to five days, the female attaches the eggs to aquatic plants or other things. After almost a week, larvae about four millimeters in size hatch, which feed on their yolk sac in their first days of life. The larvae then switch their diet to filtering fine particles. The tadpoles of Xenopus are noticeable, among other things, because they move through the water with their heads bowed down and their tail lashing rhythmically. They also have two long barbels that arise at the sides of the mouth and are directed forward. With them, the animals feel some of the food on the ground. Their mouths are constantly opening and closing - in this way they absorb water in order to filter it for planktonic food particles with the help of the gill arches . It is then released again through the pair of breathing holes (spiracula). After about four weeks, the young animals, which are now very similar to the old animals, switch their diet to solid animal food.

Close up of the head

The clawed frog normally looks for its food in the upper sediment layers of the water bed by digging through the substrate for small organisms with its forearms. Since Xenopus laevis has neither a tongue nor teeth, the whirled-up prey is captured and swallowed using a special behavior called "sucking". It is known that clawed frogs have around 200 sensory cells all over their bodies, which, like fish, function as lateral line organs. With the help of this organ, the frog registers both water movements and changes in water chemistry in its immediate vicinity. Thanks to this sensory performance, the animals are able to get an exact picture of the type and position of the prey. The lateral line organ can be recognized very well by means of raised, "seam-like" lines made up of small bulges on the frog's skin surface.

Usually, clawed frogs feed on aquatic insect larvae and worms; but also smaller fish and amphibian larvae are eaten with pleasure. With high population densities in aquariums or breeding facilities, cannibalism can occur among the frogs . Mostly one's own eggs and tadpoles are captured, especially when the latter are malformed individuals who move around "staggering" through the water. The clawed frog protects itself from predators with a poisonous skin secretion. In direct skin contact, it can cause allergies in humans.

"Fishy" face and underside of a very lightly pigmented specimen; one recognizes the large webbed feet, the claws and the lateral papillae

Clawed frogs are preferred model organisms for developmental teaching and research. Their embryos in the numerous eggs released into the water (10,000 to 15,000 pieces per female and year) are easily accessible, and unfertilized spawn can also be preserved by the administration of the human hormone chorionic gonadotropin and later fertilized at any time. The eggs are relatively large and resistant to infection following procedures such as transplants . In addition, Xenopus is adult after just two months .

Until the 1960s , pregnancy tests were also carried out with the clawed frog in German pharmacies (the so-called frog test ) - hence the name “pharmacist frog ”. Women who may have been pregnant brought their morning urine to the pharmacist, which was then injected into a young female clawed frog under the skin into the dorsal lymph sac . If the animal produced eggs (sometimes up to 2000 pieces) within 12 hours, this was considered a positive pregnancy result. In this process, also known as the “Hogben test”, which the English researcher Lancelot Hogben (1895–1975) discovered in Cape Town in the early 1930s , the frog reacts to the same hormone ( human chorionic gonadotropin or hCG) that is common today Procedure for the indication of pregnancy is examined. In theory, other frogs , such as the common toads , would have been suitable for this test; But you only noticed that later. Until the Second World War there was a lively trade in wild-caught clawed frogs. In the 1940s, the first successful breeding succeeded in masses. It had been discovered that the males also had to be treated with the active factors of pregnant urine, the so-called “prolan”, in order to stimulate reproduction in captivity particularly strongly.

The African clawed frogs used for the frog test were often attacked by the chytrid fungus , which spread worldwide and is now regarded as one of the causes of global amphibian extinction.

Legal
If clawed frogs are kept as experimental animals, the water temperature must be between 18 ° C and 22 ° C according to Appendix 3, Table 4 TschV of Switzerland, and the minimum size of the basin is stipulated.