As land vertebrates or tetrapoda ( ancient Greek τέτρα tetra , German 'four' and πόδ- pod- , German 'foot' ) are the vertebrates in the biological system that have four limbs (extremities). These quadrupeds include the amphibians (Amphibia), the Sauropsida ( reptiles ("Reptilia", paraphyletic ) and birds (Aves)) and the mammals (Mammalia) including humans . Today around 33,000 animal species are tetrapods.

In the course of evolution , some groups of terrestrial vertebrates have also conquered bodies of water and the air space as habitat ; Due to the adaptation to these habitats, the designation as "quadrupeds" ( tetrapods or tetrapods ) only applies to a limited extent to today's land vertebrates. In the case of the snakes , the four legs have even been lost again secondary. In birds , the front legs have developed into wings ; in bats , flight skins are stretched out on the extremities (similar to the extinct pterosaurs ). Amphibians live as larvae in the water and only go on land as adults. Other terrestrial vertebrates have returned to aquatic life, either partially ( seals , penguins ) or fully ( whales , manatees , some sea ​​snakes ). In the case of the seals, the feet are transformed into fins , as are the two front feet of the whales and manatees - the rear ones have been receded.

A number of adjustments are necessary for life on land. The paired fins of the fish, breast and pelvic fins, become arms (front legs) with hands (front feet) or legs (hind legs) with feet (rear feet). The basic structure of the inner skeleton of these limbs, consisting of the upper arm / thigh, forearm / thigh and hand / foot, is already given by the descent from certain fish-like meat fins (cf. Rhipidistia ). New features include elbow / knee joints, wrists / ankles and movable fingers / toes. A “primitive” characteristic of recent terrestrial vertebrates is a finger / toe number of five. However, early terrestrial vertebrates had more than five fingers / toes, Acanthostega had eight fingers, Ichthyostega had seven toes, and Tulerpeton had six fingers. In some groups of recent terrestrial vertebrates, e.g. B. in certain tailed amphibians , birds , even- toed ungulates and odd-toed ungulates , the number of fingers / toes was further reduced either in the course of specialization of locomotion or in the course of a general regression of the limbs.

Since the body experiences significantly less buoyancy outside of the water , the skeleton has to bear the weight of the body and compensate for compression and stretching stresses that are transferred from the limbs to the trunk when standing and walking. To stabilize the trunk, the vertebrae therefore often have larger contact surfaces and shortened but strong spinous processes as a base for strong back muscles. Together with the limb girdles and extremities, this results in a suspension bridge-like construction. The pelvis is firmly fused to the spine via the sacrum , the shoulder girdle is only connected to the spine via muscles and ligaments.

Almost all adult terrestrial vertebrates take up oxygen from the air with the help of lungs , including † ichthyosaurs , whales and manatees that have returned to the obligatory aquatic life  .

Body parts and organs that are only of use if there is a permanent life in the water are regressed: unpaired fins, gills, Branchiostegal apparatus and gill cover (operculum) as well as lateral line organ . The primarily aquatic larvae of amphibians are an exception with regard to the presence of (however free, unprotected) gills and a lateral line organ . Only some aquatic amphibians, such as the clawed frogs or the axolotl , which also live in the adult stage , retain their lateral line organs or even breathe through their gills for life. Due to the reduction of the gill cover, the shoulder girdle is no longer firmly connected to the skull. As a result, all terrestrial vertebrates have a more or less pronounced neck .

Terrestrial vertebrates have a middle ear for the perception of airborne sound . It corresponds to the spiracular pocket of the fish-like meat fin and is closed to the outside by an eardrum . The vibrations of the eardrum, which is set in motion by sound waves, are transmitted to the inner ear through a bone rod, the columella . The columella corresponds to the hyomandibular of the fish-like flesh fin, a relatively large bone over which the jaw apparatus (including the palate) in the area of ​​the temporomandibular joint was movably suspended on the brain skull. The change in function of the hyomandibular was made possible by the more or less rigid connection between the maxillary-palate complex and the brain skull in the terrestrial vertebrates, which in turn was made possible by the reduction of the gill apparatus. In addition to the columella (stapes), mammals have two other auditory ossicles that emerged from the bones of the lower jaw: hammer (malleus) and anvil (incus). 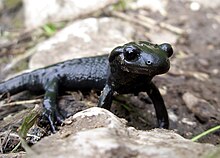 It used to be assumed that the ancestors of the terrestrial vertebrates today were fossilized coelacids , which in Upper Devonian crawled out of the water on four stalked, muscular, tassel-like fins to move over short distances on land. At that time, the waters dried up more and more often and the fish were forced to go to the land in order to conquer new habitats. The legs of the amphibians would have developed from the fins used on these shore excursions in the course of macroevolution .

According to more recent findings, the first animals, which were systematically classified as terrestrial vertebrates and whose descendants finally conquered the land 365 million years ago, still lived in the water - so their legs developed there. The actual ancestors of this group of animals were then relatives of the lungfish , who moved with four limbs that were already leg-like on the marshy soil of freshwater overgrown with aquatic plants . The around 365 million year old fish-like Panderichthys , for example, has bones that reveal its close relationship with land vertebrates. Also Acanthostega occupied, the four limbs of land vertebrates that developed already in the water. Its fore and hind limbs are built in such a way that the bones would not have been able to support the heavy body on land. In addition, Acanthostega still breathed through the gills and not through the lungs, so it was clearly an aquatic animal that moved with four legs in the water.

According to the actual ancestry relationships, the terrestrial vertebrates are to be regarded as a group of bony fish. Traditionally, however, they are not counted among the bony fish. The bony fish in the traditional sense - excluding land vertebrates - are a paraphyletic group. To avoid the ambiguity of the term "bonefish" in the phylogeny of expression is often bone gnathostomes (Osteognathostomata) used, which includes the "bony fish" and the land vertebrates.

The terrestrial vertebrates are a monophyletic group. There are traditionally four classes (highlighted here in bold). The basal tetrapods, which were previously regarded as amphibians, are now mostly not assigned to any of the four classes in terms of cladistics .