This article covers the order. For the living species discovered in 1938, see Comoros coelacanth .

Fossil are about 70 species of coelacanth in 28 genera known. Their fossil record begins in the Lower Devonian about 409 million years ago and breaks off in the late Upper Cretaceous more than 70 million years ago. Therefore, until the discovery of the recent Comoros coelacanth ( Latimeria chalumnae ) in 1938 in the Indian Ocean off South Africa, it was assumed that the coelacanth had not survived the mass extinction at the end of the Cretaceous 65 million years ago. In 1997 a very similar second species was discovered off the Indonesian island of Sulawesi , the Manado coelacanth ( Latimeria menadoensis ). The coelaceans are considered to be one of the most famous examples of living fossils .

The name “coelacanth” comes from the outdated scientific name “Crossopterygii” ( gr . Krossos “something outstanding”, “tassel”) and refers to the brush-like or tassel-shaped formation of the six rudder fins (P, V, D2 and A). The taxon "Crossopterygii" is obsolete today and is considered to be paraphyletic , since it combined the two series Actinistia (with the recent latimeries) and the fossil Rhipidistia , which were closer to the terrestrial vertebrates.

In terms of classification, there are minor discrepancies in the nomenclature between the taxa class and order . Thus, in one system ( Nelson , 2006) that is most commonly used, the Actinistia and the Coelacanthimorpha are treated synonymously and considered as a subclass. In other, less common system Coelacanthimorpha be (Engl. As infraclass infra class ) and the Actinistia (Engl. As a subclass subclass ) is considered. There is agreement in the nomenclature in both cases for the order (Coelacanthiformes) and the class (Sarcopterygii). The term “coelacanth” is not clearly assigned to any taxon. The name "Gombessa" is occasionally used colloquially for Coelacanthimorpha. 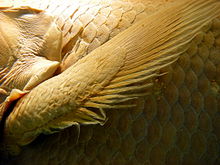 Pectoral fin of a Comoros coelacanth in the Natural History Museum

The structure of the pectoral and pelvic fins is similar to that of the limbs of terrestrial vertebrates. It is believed that early coelacanth species used their muscular fins to move about on the sea floor, possibly also on land. A bladder-like organ on the intestine filled with fat, which is interpreted as a rudiment of a swim bladder that can also be used as a lung , is an indication of the ability of the “Ur-Latimeria” to breathe air. Such an organ is still present and functional in recent lung fish.

Coelacids have a joint in the skull . This joint allows them to lift the upper jaw in relation to the back of the skull in order to enlarge the mouth opening when eating. The rostral organ , a cavity in the skull at the tip of the snout, with whose sensory cells Latimeria perceives electrical fields that surround all living animals, is also important for food acquisition . Similar electroreceptors are found in many more primitive fish, including the sharks .

Latimeria grows up to two meters long and weighs 100 kilograms. However, the brain of such a fish only weighs a few grams. It takes up very little space in the cranial cavity through which the aforementioned joint also runs and which is otherwise filled with fatty lymphoid tissue.

Preparation of a Comoros coelacanth in the Natural History Museum Vienna

The Rhipidistia , close relatives of the coelacanth and lungfish, are considered to be the ancestors of the first terrestrial vertebrates. The structure of the skeleton is similar to Ichthyostega , a fossil that is considered to be one of the first amphibians and thus a land vertebrate. The coelacanth uses its fins in a kind of " cloister ", but it only moves by swimming. Evolution had thus produced a way of " walking " that was only used later on land.

Coelacids are often portrayed as the "ancestors" of the land vertebrates (amphibians etc.). This imprecise representation does not refer to the recent coelacanth, but to the last common ancestors of the coelacanth and the terrestrial vertebrates. This makes it clear that genome comparisons of the coelacanth caught today do not allow any conclusions to be drawn about the evolutionary relationship of the “primitive coelacanth” to the modern terrestrial vertebrates. The genetic adaptation of the recent animals, morphologically very similar to the original coelaceans, to the habitat of the continental shelf took just as long as the development of the terrestrial vertebrates living today. The probability that the genome of today's coelacanth resembles that of the oldest Paleozoic forms is therefore very low, since a similar external appearance does not allow any conclusions to be drawn about the genetic match. In fact, genetic comparisons showed that the lung fish show a significantly greater genetic similarity to the "higher vertebrates" than the coelaceans.

The oldest known coelacanth is Eoactinistia from the Lower Devonian of Australia. The most recent fossil evidence comes from 70 million year old deposits of the late Upper Cretaceous. Its heyday was in the Triassic . Therefore, it was long thought that coelacanths were the latest with the dinosaurs and many other creatures at the end of the Mesozoic extinct . 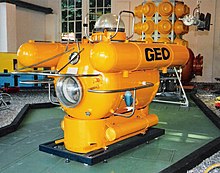 The diving boat Geo in the Stralsund Nautineum , 2006

On December 22, 1938, Marjorie Courtenay-Latimer , director of the City Maritime Museum in East London , South Africa , discovered a steel-blue fish, 1.50 meters long and 52 kilograms, in a large fish catch. The animal had been caught by a fish steamer under the command of Hendrik Goosen in the waters of the Indian Ocean off the South African coast near the mouth of the Chalumna . Since Courtenay-Latimer had become friends with Captain Goosen, she was regularly informed of the entry of the ship into the harbor and was given permission to select interesting individual pieces from the catch for her museum. What was striking about the fish, in addition to the large scales, were the fleshy fins, which stick out like limbs, and the powerful lower jaw. The specimen was already dead because of the pressure reduction (decompression) when the net was pulled in. Courtenay-Latimer sent a sketch of the fish to the chemist James LB Smith , a well-known amateur ichthyologist at Rhodes University in Grahamstown , South Africa. "I would hardly have been more amazed if I had met a dinosaur on the street," he wrote in his first reaction. Coelacids were only known as fossils until then and were believed to have originated in the Devonian over 350 million years ago and became extinct towards the end of the Cretaceous . Smith examined the find more closely and identified it as a descendant of the fossil coelacanth. Smith named the Comoros coelacanth after its discoverer and the Chalumna River as Latimeria chalumnae .

It was not until 14 years later, in 1952, that a second coelacanth was caught in the area between the Comoros Islands and Madagascar , 3000 km from the first site of discovery. Here the fish was known to the locals under the name Kombessa and was eaten as a less popular fish. Its rough scales were used as a substitute for sandpaper . More specimens could then be caught, once even a live one.

It was not until 1987 that a German research group at the Max Planck Institute for Behavioral Physiology , headed by Hans Fricke, first succeeded in observing the coelacanth in its natural habitat off the Comoros. The diving boat pilot Jürgen Schauer and the Munich biology student Olaf Reinicke discovered the first coelacanth in its natural habitat on January 17, 1987 from the submersible Geo at a depth of 198 meters. It was at that time that the first photos and film recordings of living coelaceans were made. The pictures went around the world at that time. From 1989 onwards, with the support of the Frankfurt Zoological Society, a long-term research project on the coelacanth was carried out. The newly built submersible Jago was used for the first time in this and other projects . The boat reaches a depth of 400 meters and so almost the entire habitat of these rare animals could be examined.

Another sensation occurred when the American student couple Erdmann discovered dead coelacanth in 1997 and 1998 on the fish market of Manado Tua ( Sulawesi ) in Indonesia - around 10,000 kilometers from the Comoros. In the meantime, the Fricke research team found coelacids living there with the submersible Jago , which are known as Manado coelacanth ( Latimeria menadoensis ). 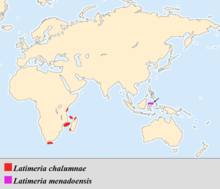 Distribution of the two Latimeria species

Latimeria chalumnae occurs in the area between the Comoros and Madagascar at a depth of 150 to 400 meters. The caves of the Comoros islands Grande Comore and Anjouan are inhabited . The second species of the genus, the Manado coelacanth ( Latimeria menadoensis ) named after the port city of Manado , was found in the Indonesian marine areas between Borneo and Celebes . These animals hardly differ morphologically from the animals from the Comoros. Molecular genetic studies of mtDNA , however, show differences. This suggests that the two populations have been reproductively isolated for about ten million years.

In 2000, deep-sea divers discovered several coelaceans of the species Latimeria chalumnae in a cave at a depth of 100 meters in the South African iSimangaliso Wetland Park on the upper edge of the canyon . The largest specimen was two meters long. A total of 25 specimens were found.

The coelacanth belong to the meat fins (Sarcopterygii) and are the sister group of the Dipnotetrapodomorpha , to which in particular the lungfish (Dipnoi or, including some extinct representatives, Dipnomorpha ) as well as the Tetrapodomorpha , i.e. the extinct closest fish-like relatives of the terrestrial vertebrates including the vertebrates (Tetrapoda) itself, belong.

Of the ten coelacanth families , all but one are extinct . 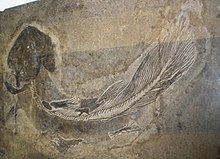