The name is derived from the British county of Devon . It was introduced to the scientific literature in 1839 by English geologists and paleontologists Roderick Murchison and Adam Sedgwick . In 1839 they separated the core of the Devonian as rock formations between the Silurian and the likewise newly introduced, coal-bearing carbonic system.

What was essential was the interpretation of the sandstones of the " Old Red Sandstone ", which is widespread in England, and the limestone in the north of the county of Devon as simultaneous deposits , which was taken over by the paleontologist William Lonsdale .

The lower limit of the Devonian system (and the Lochkovian level ) or the Silurian-Devonian boundary in geological tradition is defined by the first onset of the graptolite species Monograptus uniformis . The corresponding GSSP was established in 1972 at the International Geological Congress (IGC) in Montreal. This is located in an outcrop on the Klonk hill near the municipality Suchomasty in the Okres Beroun southwest of Prague ( Czech Republic ). In this profile, the corresponding graptolite art appears for the first time in bank 20.

The upper limit or the Devonian-Carboniferous limit is defined by the onset of the conodont species Siphonodella ( Eosiphonodella ) sulcata .

Subdivision of the Devonian

Life picture of Eusthenopteron from the Upper Devonian. With the help of its pair of muscle fins and a simply built lung, this meat finisher was able to crawl ashore for a short time in exceptional situations.

The approximately 57 million years long system of the Devonian is divided into three series :

GSSPs have already been established and passed for all stages and series of Devonian . 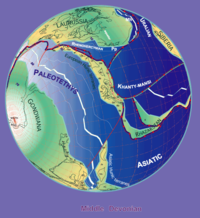 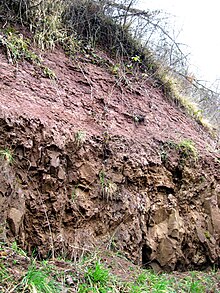 Old-Red sandstone is stored disconformingly on Silurian greywacke near Jedburgh in south-east Scotland.

In the course of the Silurian, the two primary continents Laurentia and Baltica finally collided, so that the continent Laurussia was created. This Paleozoic continent is also known as the "Old Red Continent" after the red Old Red sandstone that was deposited during this period.

As a result of the collision, the Caledonian mountains , whose formation had already begun in the Silurian, grew . The Rheic Ocean lay between Laurussia and the supercontinent Gondwana , which is partly above the South Pole .

In the Obersilur, the Hun superterran broke off the northern edge of Gondwana and drifted north towards Laurussia. This opened up a new sea, the Paleotethys, between the Hun super terran (or Armorica) and Gondwana . Already in the course of the Lower Devonian parts of the Hun-Superterran, the Armorica group , collided with the first crusty clods of Laurussia, which had broken off from Laurussia, under the subducting of the Rheic Ocean. A sea (or an oceanized continental crust), the Rheno-Hercynian Ocean, formed here in the course of the Devonian. This area was slowly closed again in the course of the Devonian by the collision of Gondwana with Laurussia.

The climate during the Devonian was rather warm and dry worldwide. The temperature differences between the polar regions and the equatorial regions were smaller than they are today. The sea level was quite high due to the small amount of inland ice . South America and today's Amazon basin lay on today's South Pole . Here, in higher mountain areas, glaciers could even form due to low temperatures, but the polar regions were not entirely covered by ice. In Gondwana in the southern hemisphere in southern latitudes there was a warm, temperate climate.

Fish of the Devonian. Reconstruction from 1905.

Elginerpeton pacheni , an early tetrapod from the Devonian layers of Scotland.

The fish developed , particularly the armored fish ( Placodermi ) in tremendous variety. Therefore the Devonian is characterized as the "Age of Pisces". The largest fish and at the same time the largest known animal creature of this period was Dunkleosteus , a predatory armorfish from the late Devonian, which belongs to the arthrodirs and could have reached a length of up to nine meters. In addition, the barbed sharks (Aconthodii) reached the height of their biodiversity . The first confirmed finds of these fish from the superclass of the jaw mouths come from the Silurian, they died out in the Permian . The coelacanth and lungfish first appeared in the Devonian.

The first land vertebrates (Tetrapoda) appear towards the end of the Devonian . Genera like Ichthyostega (around 370 million years ago) and Acanthostega had an amphibious way of life. They belong to the quadrupeds formerly known as " Labyrinthodontia " among the amphibians, which, according to fossil finds from Greenland , may have evolved from the coelacanth in the Devonian.

The first winged insects were probably formed in the Upper Devonian. Eopterum devonicum and Eopteridium striatum were considered the oldest fossil records of winged insects in the 1960s. However, it turned out that the structures mistaken for wings were the leaf-shaped parts of the endopodite and the exopodite of crab legs.

Within the group of cephalopods , the ammonites arose from the emsium onwards , which already played an important role in the stratigraphic structure of the Middle and Upper Devonian. 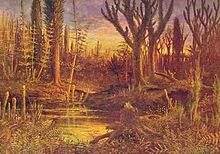 The Devonian marked the beginning of the large-scale conquest of the mainland by plants . Since larger land-dwelling herbivores did not yet exist, large forests could spread.

The land plants , which presumably had already developed in the Ordovician , continued to spread in the Devonian. Here, too, there was radiation. Important plants of the Devonian: Rhynia (genus of the ancient ferns ), Baragwanathia (genus of the bear moss family ), Zosterophyllum (ancient ferns), Taeniocrada (ancient ferns), Asteroxylon (bear moss family). The first reliable evidence of mycorrhiza was found in the fossilized roots of Asteroxylon and also in Rhynia . The mycorrhiza is a symbiosis of fungi with plants, which makes it easier for the plant to absorb water through the roots . Fungal hyphae and fungal spores of Phycomycetes can be found in the fossilized roots of Asteroxylon . In the opinion of many botanists and ecologists, going ashore was only possible with the help of mushrooms.

The moss species Pallaviciniites devonicus from the Upper Devonian is one of the first confirmed moss finds . This species is assigned to the liverwort , more precisely to the subclass Metzgeriidae (also understood as the order Metzgeriales ). The mosses must have developed earlier, but fossil finds are very rare.

The first forests emerged in the swampy, tropical areas of the Upper Devonian. The oldest coal deposits arose from them.

Due to the spread of land plants and the associated increase in photosynthetic activity , the oxygen content of the air rose sharply. In carbon it reached a value of about 35 percent.

The Devonian in Central Europe

The rock formations of the siliciclastic and carbonate sediments from the deposition area of ​​the shelf near the coast are called 'Rhenish facies' in the Devonian. Here are the typical of the Devon bioherms (wave-resistant and have the time relief-forming Riffkörper ) to find. The now extinct stromatopores , rugosa and tabulata were particularly prominent as reef builders . Paleozoic reef formation reached its peak in the Devonian. After the extinction at the end of the Devonian, large reefs were no longer formed for a long time, only in the Mesozoic era powerful reefs emerged again.

An example of a small isolated atoll reef that was formed during the Givetian and Frasnian is the Iberg in the Harz Mountains. The Elbingeröder complex , which was formed on a volcanic base during the same period, is larger. The brachiopods Stringocephalus burtini and Uncites gryphus also lived within these atolls . They are found in the mass limestone of the Rhenish Slate Mountains and are regarded as key fossils of the Givetium. Fossil Devonian reefs and pelagic carbonates also exist south of what is actually Central Europe today in the Carnic Alps . There the reef limestone facies are more than 1000 meters thick . The reef formation increases rapidly from the Pragium and reaches its peak in the Givetium and Frasnium. Typical locations for this limestone are the Kellerspitzen and the Hohe Warte .

The rocks of the 'Hercynian' and 'Bohemian facies' were sedimented on the deep shelf and in the open ocean in Central Europe. They are often dark colored clays or marls in which plankton or necton from the water body are fossilized. The sea floor was mostly low in oxygen , so that only some areas of soil organisms have survived. Benthos was brought in more frequently by submarine landslides , turbid currents or storm surge events than allochton . Pelagic limestone (cephalopod limestone) with a typical fauna of cephalopods and conodonts could be sedimented on thresholds between these formations of the deeper water .

In the Upper Devonian , a striking two-phase extinction event occurred in the most recent frasnium , which is expressed in lithology by the appearance of dark, carbon-rich rocks.

The first description of lithology and macrofauna comes from Friedrich Adolf Roemer (1850) from the Kellwassertal , a side valley of the Oker valley in the Harz . According to the locality, the dark, mostly marl-like rocks are referred to as Kellwasser limestone and accordingly the event is referred to as the " Kellwasser event ".

Before the event, there was a rise in sea level during the frasnium, interrupted by several regression events, with a presumed high at the beginning of the event. Each of these phases , which last several tens of thousands of years, is initiated by a sudden further rise in sea ​​level , which is associated with the formation of carbon-rich limes, marls and clays under anoxic conditions, especially in localities in Europe and North Africa. The sedimentation of breccias and / or the appearance of sediment structures such as the “deformed sliding masses” indicate a sudden drop in sea level towards the end of each of the two phases. The second phase initiates a global lowering of the sea level through the entire family, only interrupted by short transgressive pulses. This eustatic lowering of the sea level was caused by a global cooling with the formation of a glaciation on the southern continent. The most significant of the extinction events linked to the Kellwasser event took place at the end of the second phase.

During these extinction events mainly marine groups were affected, the land organisms were less reduced. Some of the most affected groups may have been a. the trilobites , acritarcha , the tabulata and rugosa , stromatopores , brachiopoda and the armored fish .