A mass movement, slope movement or landslide is a geomorphological process in which a certain mass of soils , regolith and rocks including the loads on them are set in motion down the slope under the influence of gravity by the driving effect of a component of gravity. Typical is the occurrence of a slip plane between the stationary subsoil and the masses that slide over it. Movement is started and maintained by overcoming cohesion, frictional force and flow resistance.

Fixed barriers, decreasing inclines, reaching a level or opposite slope slow down the process in front. Depending on the speed - proportional to the kinetic energy - can the mass inertia effect a pushing together and superimposed through the masses. At the end of the decay process, the current sliding surface in the material can rise higher and ultimately even run uphill in the direction of movement.

Mass movements can occur in the form of crawling, sliding, flowing, shooting, tilting or falling - each with their own characteristic properties - and their sequence can take between seconds and years. Mass movements take place both on the land surface and in submarine terrain and have been observed on Mars and Venus in addition to Earth . 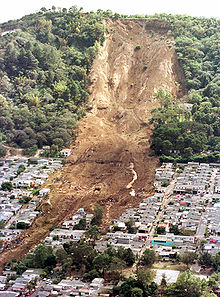 When the gravitational force acts on a slope and exceeds the frictional force, mass movement occurs. The strength and cohesion of the slope material and the amount of internal friction help maintain slope stability. In this context, one also speaks of the shear force . The steepest angle a cohesive slope can have without losing its stability is called the angle of friction . If a slope has this angle, the shear force keeps the acting gravity exactly in balance.

Mass movements can be very slow, especially in areas that are very dry or where there is sufficient rainfall to allow a stabilizing cover of vegetation to form. But they can also run at a very high speed, in the form of rock falls or landslides, for example, which can have devastating consequences that occur either immediately or after a delay (for example in the form of a damming lake ).

Factors that can change the potential of mass movements are: change in slope, weakening of the material due to weathering , increase in the water content, change in vegetation cover .

Processes and forms of mass movements

Mass movement is one of the processes of extensive erosion ( denudation ). With regard to their dynamics, different types of mass movement can be distinguished:

The importance of water for mass movements

Landslide after the Alpine floods in 2005

Water can increase or decrease the stability of a slope, depending on the amount of water present. Small amounts of water can strengthen soils due to the surface tension of the water, as the soil has an increased cohesion. This allows the soil to be more resistant to erosion than if it were dry.

If there is too much water, however, it acts as a kind of lubricant and thus accelerates erosion processes that result in various types of mass movements (e.g. mudslides, landslides, ...). You can imagine this when you think of a sand castle. The sand needs to be mixed with water to hold its shape. If you add too much water to the sand, the sand will run away; If you use too little water, the pile of sand collapses because it cannot be kept in shape.

In the case of landslides underwater, energy from the landslide can turn into a tsunami . B. for the Newfoundland Bank tsunami of 1929.

Soils and regolith linger on a slope as long as the gravitational force doesn't exceed the frictional force that keeps the material in place. Factors that reduce this frictional resistance can be: