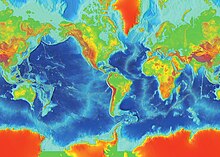 The surface shape of the earth 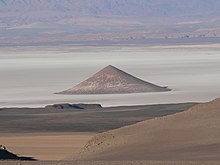 The Geomorphology (from Greek γῆ ge 'earth', μορφή morphé , shape ',' form 'and λόγος lógos , Word', 'teaching', 'reason') or landform customer is a branch of physical geography and examines not only the forms and shape-forming processes of the surface of the earth , but also those of the moon , Mars and other planets. There are overlaps with other geosciences such as geology , cartography , soil science and climatology .

A decisive factor for understanding geomorphology is knowledge of the current climate and its characteristics in past geological ages . The changes in the treasure trove of forms in connection with climatological changes in recent geological history are examined by climatic geomorphology .

The investigation of the finer design of the surface forms through exogenous processes ( erosion processes ) is in the foreground, the geology provides important background knowledge, especially for the endogenous formation of forms ( tectonics , seismics , volcanism ).

The geomorphology includes the five sub-areas:

The landscape contents ( relief , landscape-shaping processes, geological classification) can be summarized on a geomorphological map (GMK). The German Research Foundation (DFG) has supported the development of a general methodology for creating a GMK with several research projects since 1976. As part of the GMK priority program "Geomorphological Detailed Mapping in the Federal Republic of Germany", a larger number of geomorphological map sheets in the two scales 1: 25,000 (GMK25: 26 maps) and 1: 100,000 (GMK100: 8 maps) were used as examples for typical German landscapes. created with explanations, e.g. B. for coastal areas, glacial young moraine landscapes , low mountain ranges and high mountain landscapes , as well as fluvial river landscapes. The methodology developed is generally suitable for mapping geomorphological maps in all types of landscape on earth. An overview of the overall project is provided by Stäblein, 1978. Large-scale maps , e.g. B. GMK 1: 12.500 are thus possible and then allow the landscape forms and processes to be represented in even more detail.

A geomorphological map is based on the most important elements of the topographic map . There are also individual information layers in the form of hatching, symbols and surface colors. Slopes , substrates and surface rocks are shown in hatching, the morphography and morphodynamics (processes and process areas, curved lines, valleys and contour lines as well as individual shapes) by symbols. The morphogenesis is represented by area colors, the hydrography in blue. All 34 geomorphological maps from the GMK priority program of the DFG are available online with the accompanying volumes / supplementary booklets.

With the developed methodology, the geomorphologist is given a tool with clearly defined guidelines for mapping. For landscape planning , the assessment of natural hazards or groundwater resources, geomorphological maps can be a useful aid with important information for planning. 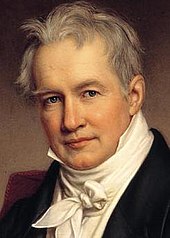 First approaches and thoughts on the treasure trove and formation of the earth's surface such as volcanic formation, earthquakes, coastal development as well as on fluvial processes and valley formation were, e. B. von Strabon and Seneca , since the 6th century BC. Already formulated in antiquity. During the Middle Ages , as in most sciences, progress was marginal.

The history of geomorphology as it is today goes back to the end of the 18th century. The new science developed from the beginnings of modern geology. Early, from today's point of view, geomorphological questions dealt with e.g. B. James Hutton and John Playfair (glacial erosion, 1802), Charles Lyell , who spread Hutton's concept of actualism , and Alexander von Humboldt in publications about his South America expedition. However, geomorphology as an independent discipline did not yet exist at that time. In 1858 Carl Friedrich Naumann used the term "morphology of the earth's surface" for the first time in his textbook on geognosy . In the period that followed, scientists such as Andrew Ramsay with the first scientific study of fluvial and marine erosion processes and William Morris Davis with his erosion cycle gave the research area new impulses. In Germany, Ferdinand von Richthofen , Alfred Hettner and Albrecht Penck stood out. The latter published the first standard work Morphology of the Earth's Surface in two volumes in 1894 . However, it was only sporadically noticed by the professional world and only gained greater popularity a few decades later. Further representatives of geomorphology in Germany were Walther Penck , the son of Albrecht Penck, as well as Heinrich Schmitthenner and Julius Büdel .