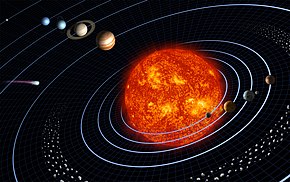 The celestial bodies of the solar system with their different atmospheres

The atmosphere [ atmosfɛːrə ] (from ancient Greek ἀτμός ATMOS , German , steam ' , haze', 'touch' and σφαῖρα sfaira , German , ball ' ) is the gas -shaped shell to larger celestial body - in particular to stars and planets. It usually consists of a mixture of gases that can be held in place by the celestial body's gravitational field . The atmosphere is most dense on the surface and flows fluidly into interplanetary space at great heightsover. In the event of its existence, it essentially determines the appearance of a celestial body.

The hot atmospheres of stars reach deep into space. In the case of gas planets , they are much cooler and not sharply separated from the deeper layers of the celestial body. In large rocky planets and in Saturn's moon Titan , the atmosphere is an earth sphere (named after the earth) and lies above the pedosphere (accessible ground) and the lithosphere below .

Creation of an atmosphere

Several factors play a role in the formation of a planetary atmosphere:

Planetary mass and radius determine the gravitational field on the surface. This must be sufficiently strong so that the gas particles that usually result from outgassing remain bound to the celestial body and cannot evaporate into space.

According to the kinetic gas theory , the particles move in a disorderly manner and the faster the higher the temperature of the gas and the lighter they are. If the gravitational pull is too low, the celestial body loses the fast (specifically light) parts of its gas envelope in the long term. The Planetary Science speaks of positive particle model if the outgassing of the rock represents more than is lost by overcoming gravity. If this balance is negative even for heavier gases , no atmosphere can develop.

Therefore, in addition to the size of the celestial body, its surface temperature (which must not be too high) plays an important role. The type of gases formed is also important, since a planet or large moon can hold an atmosphere made of hydrogen or helium much more difficult than an envelope made of oxygen, nitrogen or carbon dioxide . This is because light gas particles move much faster than heavier ones at the same temperature. Atmospheres that contain elements such as hydrogen to a large extent are therefore mainly found in very massive gas giants such as Jupiter or Saturn, which have very strong gravity.

Ultimately, only a small minority of the heavenly bodies are able to create an atmosphere and to bind it to itself in the long term. For example, the earth's moon has no permanent atmosphere, but only short-term, ground-level gases.

Atmospheres of the different celestial bodies

If you compare the celestial bodies of our solar system and the stars, the influence of the factors relevant to the formation of an atmosphere becomes apparent and reveals quite different atmospheres.

The sun or the various stars have far-reaching atmospheres that begin with the photosphere , chromosphere and transition region and end with the corona , solar wind and heliosphere in the broadest sense deep in the interplanetary space at the heliopause. The sun's atmosphere consists largely of hydrogen (approx. 73%) and helium (approx. 25%), which in the form of ionized plasmas (solar wind and solar storm ) influence the atmospheres of the remaining celestial bodies in the system.

The atmospheric composition of the gas giants such as Jupiter , Saturn , Uranus and Neptune , like that of the stars, is essentially based on the substances hydrogen and helium . However, their core is cold and the radiation pressure as with the stars is absent.

Atmospheres of the earth-like planets

Atmospheres of moons and dwarf planets

Even with planets of other star systems - the extrasolar planets - the existence of atmospheres could be detected with various methods, but so far only in a radius of approx. 300 light years around our solar system.

The knowledge of the properties of these atmospheres is currently very sketchy and unsystematic. This is because modern astronomical instruments are not yet designed for this branch of science. This will change in the future generation of instruments such as: B. the space telescope JWST and the ground telescope E-ELT, whose design was specifically developed in this direction.

Nevertheless, the above-mentioned methods for discovering planets can be used, even in lucky cases, to determine the atmospheric properties of some planets. Since the atmospheres of Hot Jupiter exoplanets are the easiest to detect and characterize, a first systematic comparison of their cloud cover properties could be carried out. An anti-correlation between cloud cover and spectral signatures of water in these atmospheres was found. This would mean that water is generally bound in these planets when they are formed, which is one of the first general findings about exoplanetary atmospheres.

An overview of the celestial bodies of the solar system with regard to their atmospheric pressure on the surface and their chemical composition in percent by volume . The main components of an atmosphere and the water resources are listed.

Structure and gradients using the example of the earth's atmosphere

The pressure curve of an atmosphere, in the case of the earth's atmosphere, the air pressure , is determined in the lower ranges by the hydrostatic equation , which is written as follows for atmospheres that are thin compared to the planetary radius:

The influencing variables are the pressure p , the height h , the acceleration due to gravity g and the density ρ . In the case of constant temperature , the equation is reduced to the barometric altitude formula . In the outer area, however, this description is no longer valid, because the components move on Kepler orbits or the magnetic field lines due to the low density and hardly influence each other. The International Standard Atmosphere (ISA) is used for technical modeling , which represents a purely idealized view of the entire planet. The ISA describes the temperature profile according to the polytropic equations of state. For this purpose, the atmosphere is divided into troposphere and upper and lower stratosphere. Most of the international air traffic takes place in the lower stratosphere (11-20 km altitude). Supersonic flights, however, in the upper stratosphere.

As a rule, an atmosphere is not a homogeneous gas envelope, but rather, due to numerous internal and external influences, it can be divided into several more or less clearly delimited layers, which are primarily created by the temperature dependence of chemical processes in the atmosphere and the radiation permeability depending on the altitude. The following layers can essentially be distinguished according to the temperature profile:

This structure only gives a rough classification, and not every layer can be detected in all atmospheres. For example, Venus has no stratosphere, while smaller planets and moons only have an exosphere, such as Mercury . The vertical structure of the atmosphere is decisive for the development and development of the twilight colors .

It is also possible to classify the atmosphere not according to the temperature profile, but according to other aspects, such as: