The magnetosphere shields the earth's surface from the charged particles of the solar wind.

The magnetosphere is the space around an astronomical object in which the object's magnetic field dominates. Its sharp outer boundary is called the magnetopause. The inner boundary to the neutral atmosphere is the ionosphere .

Simulation of the earth's magnetic field in interaction with the IMF . The sun is on the left. Reconnections in the tail area (right) are only indicated as a preliminary stage.

The magnetic field lines are closed on the day side and open in the outer areas of the magnetic tail (the northern and southern tail lobes ), the transition area at the magnetic poles is called cusp or cleft - in these areas, particles of the solar wind can move directly into the inner layers of the atmosphere penetration. The plasma layer with closed field lines and the neutral layer at greater distances are located between the lobes near the earth . 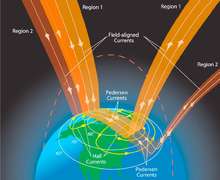 The interaction of the magnetic field of the passing solar wind with the earthly magnetic field leads to a dynamo effect , whereby the earth forms the stator and the solar wind forms the rotor. This interaction leads to a transfer of energy to the magnetosphere and to a complex system of electrical currents ( magnetospheric electrical convection field ). The outer layers of the atmosphere contain highly diluted plasma , the charged particles of which move along the magnetic field lines on spiral paths. This movement induces a neutral layer current in the neutral layer . The ring current is formed in the plasma layer together with the earth's magnetic field .

The main part of the induced currents form the Birkeland currents (after Kristian Birkeland , 1867–1917). They consist of electrons that, due to the Lorentz force , move in spirals around the magnetic field lines running from the north to the south pole. These particles move practically without bumps in the radiation belts (the so-called Van Allen belts ) of the outer atmosphere and, due to the preservation of the magnetic moment, are reflected when approaching the magnetic poles and move back towards the other pole.

With increased solar activity there are more and more energetic free electrons in the upper layers of the atmosphere, so that they hit the atoms of the atmosphere at a height of about 100 to 150 km and stimulate them. This leads to the luminous phenomena known as polar lights .

The Birkeland currents are closed at an altitude of about 100 to 150 km by the Pedersen currents . The current densities are a few amps per square kilometer (or microamperes per square meter), which leads to a total current of a few 10,000 amperes ( ionospheric dynamo layer ).

Sun-generated electrical currents on the day side of the ionosphere

The earthly ring current is an electric current that flows around the earth along the Van Allen Belt in the equatorial plane in an east-west direction. It is carried by ions with an energy of around 15 to 200  keV , which are created when air particles are ionized by cosmic rays . However, these particles not only move in spiral orbits around the field lines, but also drift. The electrons move from west to east, the protons from east to west. This leads to an effective flow in an east-west direction. The expansion of this ring current ranges from about two to about nine earth radii. Although the typical current densities are only a few milliamperes per square meter, the enormous volume results in currents of several megamperes.

In quiet phases, the ring current is mainly fed from the plasma layer; more than 90% of the energy density is carried by hydrogen ions. In contrast, when magnetic storms occur, oxygen ions from the upper layers of the atmosphere gain in importance and can carry the majority of the current in strong storms.

The Pedersen currents lead to a Hall current in an east-west direction, which is known as a polar electrojet . The electric jet can reach currents of more than a million amperes during magnetic storms and can change very strongly on time scales of minutes. Together with the Pedersen currents, this leads to a strongly fluctuating field on the earth's surface, which induces strong currents, especially in long conductors such as high-voltage lines and pipelines, which can damage or destroy electrical components or lead to increased corrosion.

Since the atmosphere is a poor electrical conductor at about 100 km altitude, the Pedersen currents and the electric jets also lead to a strong heating of the atmosphere, which leads to a strong expansion - some storms resulted in the area of ​​satellites in low orbits (up to about 800 km ) to a doubling of the air density and a correspondingly higher deceleration due to the higher air resistance; this expansion also leads to an increased entry of oxygen ions into the ring flow.

The solar wind and the currents in the tail lobes lead to strong distortions of the field lines in the plasma layer of the magnetic tail. If these distortions become too strong (the processes are not yet understood in detail), there may be constrictions due to magnetic reconnections - the parts of the field lines closer to the earth close to more dipole-like field lines, while the parts further away from the earth form a plasmoid , a plasma-filled area with in closed field lines. On the one hand, the released magnetic energy accelerates the plasmoid outwards, on the other hand it leads to a heating of higher atmospheric layers and thus to an intensifying feedback with the electrical flow system.

The process of plasmoid-detachment is a magnetic substorm ( substorm called) because they are initially only as a sub-component magnetic storms looked. Today we know, however, that the partial storm is a phenomenon that occurs not only in "storm phases", but also in calm phases - the course is very similar in both cases: a partial storm lasts about 45 minutes and leads to plasma heating of about 2 keV. During a storm phase, however, the plasma is already hotter at the beginning (about 3 to 4 keV in rest phases and about 8 keV in storm phases) and the rise is steeper.

Ever since it was recognized that the earth's magnetic field had collapses and polarity reversals at irregular intervals , scientists have tried to link these pole shifts to mass extinctions . However, such proof has not yet been achieved. One possible explanation for this is that if the magnetosphere was weak or completely absent, the earth's atmosphere would serve as a protective shield against dangerous cosmic rays. According to model calculations, secondary radiation of beryllium-10 or chlorine-36 would result. In fact, a German study in 2012 found a tip of beryllium-10 in ice cores from Greenland 41,000 years ago when the earth's magnetic field collapsed to an estimated 5% of its strength during a brief magnetic field reversal.

Another possible explanation is that even if the polarity is reversed, the earth's magnetic field never completely disappears. According to a 1999 study, during the Brunhes-Matuyama reversal around 786,000 years ago, there was still a magnetopause at around three earth radii.

At the earth the shock front is on average about ten earth radii away. However, Jupiter has the largest magnetosphere in the solar system . Here the distance between the planet and the collision front is at times up to one hundred Jupiter radii.

Web links and other sources