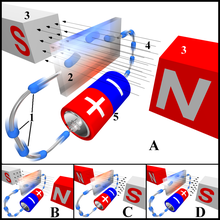 Clarification of the Hall effect:
In drawing A , the Hall probe takes on a negative charge on the top (symbolized by the blue color) and a positive charge on the bottom (red color). In the drawings B and C , the electric and magnetic fields are reversed, so that the charge polarization is reversed. In drawing D both fields are reversed, so that the same polarization as in drawing A is established again. Legend:
1   electron
2   Hall element or Hall probe
3   magnets
4   magnetic field
5   power source

The Hall effect [ 'hɔːl -], named after Edwin Hall , describes the occurrence of an electrical voltage in a current-carrying conductor that is located in a stationary magnetic field . The voltage drops perpendicular to both the current flow and the magnetic field direction on the conductor and is called Hall voltage .

from current strength , magnetic flux density , thickness of the sample (parallel to ) and a material constant - the so-called Hall constant (also: Hall coefficient) .

Hall effect and streamlines on the thin conductor 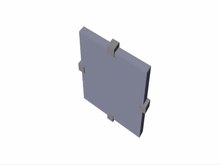 The Hall effect occurs in an electrical conductor with a current flowing through it, which is located in a magnetic field , an electrical field being built up which is perpendicular to the direction of the current and the magnetic field and which compensates for the Lorentz force acting on the electrons .

When a voltage is applied to the sample, a current flows . The charge carriers are generally electrons , but hole conduction can also prevail in appropriately doped semiconductors . The electrons move against the technical direction of the current at an average speed ( drift speed ) through the conductor. Because of the Lorentz force caused by the magnetic field , the electron is deflected perpendicular to its direction of movement. This results in an excess of electrons on the corresponding side of the conductor (highlighted in blue), while on the opposite side there is an electron deficiency to the same extent (highlighted in red). So you are dealing with a charge separation, comparable to that of a capacitor . The opposing negative and positive excess charges cause an electric field that exerts a force on the electrons that is opposite to the Lorentz force. The intensification of the charge separation comes to a standstill when both forces are compensating each other. As with the capacitor, a voltage can be tapped, which is referred to here as the Hall voltage . The Hall voltage usually follows changes in current and magnetic field directly. It increases linearly with the magnetic field and is inversely proportional to the (signed) charge carrier density , since a smaller number of charge carriers can lead to an unchanged current strength only at a higher speed of the individual charges. A higher Lorentz force acts on the faster charge carriers, which increases the Hall voltage. Since the charge carrier density in semiconductors is significantly lower than in metals, semiconductors are mainly used as Hall probes.

In particular, the Hall voltage is independent of the specific resistance of the sample. The Hall effect is used both to measure magnetic fields (with a Hall probe ) and to determine the type of charge carrier (electrons or holes) and their density .

The specific properties of the conduction process are represented by the Hall constant .

Edwin Hall described the effect, which was later named after him, in 1879 as part of his doctoral thesis. According to his own statement, he was motivated by a statement by James Clerk Maxwell to look for this effect, because Maxwell's statement seemed unnatural to him:

“It must be carefully remembered that the mechanical force pushing a live conductor across the lines of magnetic force does not act on the electrical current, but on the conductor that carries it. - The only force that acts on an electric current is the electromotive force. "

A number of other physicists had already sought such an effect before Hall (such as Feilitzsch , Mach , Wiedemann and his doctoral supervisor Rowland ), but it was only when he achieved sufficient measurement sensitivity. His doctoral thesis included measurements of the Hall effect in gold. On later measurements, Kelvin noted :

"The subject of the communication is by far the greatest discovery that has been made in respect to the electrical properties of metals since the times of Faraday - a discovery comparable with the greatest made by Faraday."

"The contents of the communication are by far the greatest discovery in the field of electrical properties of metals since Faraday's time - a discovery comparable to Faraday's greatest."

Basic knowledge of vector calculus and electrodynamics is helpful in understanding this section .

A short derivation of the formula for the Hall voltage should be sketched at this point. The validity of the derivation is limited to electrical conductors with only one type of charge carrier, such as metals (electrons) or heavily doped semiconductors (predominantly either holes or electrons).

With the Hall effect, a compensating electric field is built up, which neutralizes the deflecting effect of the magnetic field. The following must therefore apply to the resulting force on the load carriers:

For the sake of simplicity, the coordinate system is set in such a way that the charge carriers move in the direction and the magnetic field acts in the direction. So it is and . Thus the y-component of the above equation becomes after division by :

The current density in the conductor can generally by express. If you break this relationship and put it in the above equation , you get

This relationship defines the Hall constant , which characterizes the strength of the Hall effect.

To make the equation a little more manageable, the conductor in which charge separation has taken place can be viewed as a plate capacitor. For this the relationship applies

In addition, the current density in the present case can be expressed by. If you use these two notations, you get an expression for the Hall voltage that only depends on easily measurable quantities :

This equation is also correct for conductors with different types of charge carriers, but the Hall constant can then no longer be calculated. The so-called Hall resistance can be specified from the equation : 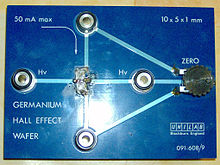 In electronics, the Hall effect is used in so-called Hall probes to measure the magnetic flux density . If a current flows through the conductor, the generated Hall voltage can be calculated using the above formula . Materials with a large Hall constant are characterized by their high sensitivity. For this reason, semiconductor materials are mostly used. Mass production for widespread use in industry was only possible through the integration of Hall plates in CMOS technology. Only then can temperature dependencies and other effects be compensated and the Hall voltage evaluated accordingly and digitally processed. Today there are increasingly complex Hall sensors based on CMOS in applications for angle, position, speed and current measurement.

Another area of ​​application is the determination of charge carrier densities by measuring the Hall constants. By additionally measuring the electrical conductivity (or the specific resistance ), it is also possible to determine the mobility of the charge carriers in the material. A convenient method for determining the specific resistance and the Hall constant on thin layers is the Van der Pauw measurement method .

An electronic compass can be built with Hall probes.

Practical applications can also be found in space travel, in Hall-ion thrusters .

As early as 1930 Landau had the idea that at very low temperatures, strong magnetic fields and two-dimensional conductors, quantum effects should occur. The quantum Hall effect has the effect that in two-dimensional systems with very strong magnetic fields and low temperatures (a few Kelvin ) the Hall voltage divided by the current cannot vary at will if the magnetic field strength is varied, but that the ratio varies in steps. is z. B. at interfaces or surfaces under the specified conditions always an integer fraction of the Von Klitzing constant

(in the unit ohm = volt / ampere ; is Planck's constant , the elementary charge ). The scale values specified for the relationship so are: , , and so on. The accuracy with which these plateaus can be reproduced is so good that international treaties have established them as the standard for electrical resistance . The quantum Hall effect is largely understood. Klaus von Klitzing received the Nobel Prize in 1985 for this discovery .

When electrons move through a solid, they are deflected laterally by quantum mechanical effects - to the right or left , depending on the orientation of the spin (intrinsic angular momentum of the electron). A “ spin current ” is created in the transverse direction. In contrast to the usual Hall effect, no external magnetic field is required for this so-called "spin-Hall effect"; the effect is created by extrinsic (e.g., by impurities ) or by intrinsic mechanisms (e.g. by the spin -Bahn coupling ).

The Righi-Leduc effect , also called "thermal Hall effect" ( eng. : Thermal Hall effect ) called, describes the occurrence of a transverse temperature difference when heat flows through a conductor in a stationary magnetic field is located. It is the thermomagnetic analogue of the Hall effect.

The Nernst effect describes the occurrence of a transverse voltage when heat flows through a conductor that is in a stationary magnetic field .