from Wikipedia, the free encyclopedia
The dry recorded word “yes” followed by the same “yes” with massive digital reverberation

The term reverberation or colloquially briefly Hall as distinct from Echo continuous reflections of sound waves ( sound reflections ) in a closed room or in a naturally limited range.

Reverberation also plays a major role in active sonar . This is treated under water-borne noise.

Representation of the origin of the different types of reverb:
red : direct sound , green : early reflections from the walls, blue : the reverberation 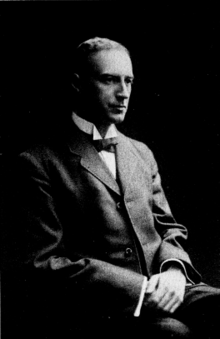 Wallace Sabine, whose Sabine formula is the basic equation for reverberation

With the start of broadcasting in the 1920s, the question of how to equip rooms with different acoustic impressions quickly arose. As early as 1925, the BBC was lining the walls of its speaker rooms with sound-absorbing materials. The first "anechoic" rooms, called "dry" in recording technology, were created. Although their neutral sound character seemed appropriate for the news, comments and program announcements, more space was desired for other applications, i.e. more sound reflections, more reverberation.

At the same time, physicists became interested again in the discipline of acoustics after about forty years of idle research. The pioneering work on acoustics of Wallace Clement Sabine quantified sound reflections, and in 1928 wrote the Times that due to the new research, the concepts of transmitting and receiving areas to be reconsidered would. Because of the typically small apartments of the radio listeners, no echo can be generated there. So the insulation on the studio side was changed and special "echo rooms" were used to simulate a larger feeling of space.

Sound emitted by a source is reflected by different surfaces depending on their surface properties. Smooth, reverberant surfaces reflect sound in the same way that a mirror reflects light. The angle of incidence is equal to the angle of reflection (angle of reflection). In the case of rough structures, on the other hand, the throwback occurs in many directions. The rougher a material is, the more diffuse it throws this sound back. This degree of reflection is frequency-dependent and dependent on the nature of the material. Hard material hardly absorbs the sound waves, while soft material absorbs more. In large rooms without absorption surfaces such as churches, swimming pools or large caves, reverberation can be easily observed if no additional absorption measures have been taken.

Reverberation occurs as a result of repeated sound reflections that weaken over time. The attenuation is caused on the one hand by the fact that part of the energy is converted into heat with each reflection (since no material is ideally acoustically hard) and on the other hand because the propagation of the sound in the air is lossy (since the oscillation of the air particles is friction generated). The time in which the sound pressure level drops by 60 dB after the sound source has suddenly gone silent is called the reverberation time T 60 , more commonly referred to as RT ( reverberation time ). A decrease of 60 dB corresponds to a decrease in sound pressure to one thousandth of the initial value. The reverberation time and its dependence on the frequency provide important information on the audibility of a room and its suitability for speech and music performances.

For music, on the other hand, reverberation is desirable to a certain extent, as the music sounds unnatural in a room that is too “dry” and inaccuracies in the game are too audible. A reverberation time of around 1.2 to 1.6 s is desired for chamber music, 1.7 to 2.2 s for orchestral music, and even more for organ music.

Since the direct sound becomes weaker with increasing distance from the sound source (around 6 dB when the distance is doubled), while the diffuse sound (the sum of reflections) remains roughly constant throughout the room, a distance from the sound source can be specified at which both components are equally strong. This distance is called the Hall radius r H and is calculated using Sabine's approximation formula:

When creating an artificial spatial effect, a signal is changed in such a way that the listener thinks that the signal was created in a certain room ( ambience ) and not in a dry recording studio . If there are several signals, each of them is rarely processed with exactly the same reverb effect , as otherwise the impression of spatial depth would not arise in front of the listener. A gradation of depth is achieved primarily through different reverberation times, intensities and characteristics, through which individual signals appear further forward or backward within the sound image.

Properties that influence the spatial impression of the reverberation are:

The pre-delay is of particular importance for reverb devices . This is the time interval between direct sound and the first reflection , which with the beginning time gap or ITDG = Initial Time Delay Gap is referred to. This enables the position of a sound source in the room to be simulated.

If a signal is to be given a special note for artistic or taste reasons, then the artificial reverberation effect is chosen. In order to emphasize the sound of the signal, an effect is added to the signal that does not correspond to the natural reverberation, for example with a singing voice.

Today, reverb effects are produced by digital effects processors . Complicated algorithms create this acoustic effect . The various attributes such as reverberation time, pre-delay, frequency response of the diffuse reverberation tail, diffusivity, room geometry can be changed in real time. The technology is now well advanced and enables certain rooms in reality to be simulated quite well in terms of reverberation behavior. Room acoustics simulators have been used in sound and radio studios since the early 1980s.

This is achieved even better with a newer type of reverb generation. The room impulse response is saved, so to speak a “ fingerprint ” of the acoustic properties of a real room. Any acoustic signals can now be provided with this fingerprint. This form of reverb generation is also called convolution reverb , since the mathematical operation of convolution is used to generate signals . This technology is not limited to simulating rooms, but any linear, time-invariant acoustic system can be simulated, including devices such as microphones.

Impulse responses in WAV format that are approximately simulated in amplitudes are free and available on the Internet.

The reverse reverberation effect is used less frequently . The singing voice, for example, can be heard as reverberation even before it is actually used. Since this effect does not correspond to the natural reverb effect, its possible uses are rather limited. A typical example is Whole Lotta Love by Led Zeppelin , where in the extended outro Robert Plant's voice can be heard through the reversed reverberation even before it is actually used, which was sometimes classified as a recording error in the recording studio.

In a separate standard for sound studios, DIN 15996 “Image and sound processing in film, video and radio companies - principles and specifications for the workplace” (from April 1996, last changed in May 2008), very high requirements are placed on the reverberation time. In order to achieve mixes in the recording studio that sound similar in every room, the listening room itself must contribute as little as possible to the sound image. The control room should therefore be as neutral as possible so that the sound engineer only hears what is on the recording. To achieve this goal, very short reverberation times are required. These reverberation times are frequency-dependent and are specified with tolerance ranges according to DIN 15996. This permissible tolerance range is very narrow. This can only be achieved with a great deal of effort and with metrological control of the construction work.