This article covers the British daily newspaper published in London. For other newspapers that appear under the same name or with a name affix, see Times .

The Times is a national newspaper from Great Britain .

Outside the UK, it is sometimes referred to as The London Times or The Times of London to distinguish it from many other newspapers called the Times . 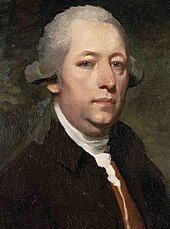 The Times was founded by the printer John Walter on January 1, 1785 as The Daily Universal Register . She changed her title to The Times on January 1, 1788 . John Walter was also the newspaper's first editor . Initially, the paper had only a poor reputation, only when Walter's son, John Walter the Younger , took over the publication of the paper in 1803, did this change. The younger Walter worked for the Times until his death in 1847 . Already at the beginning of his activity he made the decision to make the Times independent of government and parties, which was made difficult for him. Among other things, he was not allowed to use the government parcel ships to deal with his correspondence. That is why he organized his own service with vehicles, mail and express couriers.

On November 29, 1814, the Times was printed for the first time and as the first newspaper in the world with a steam-powered high - speed press from the Germans Friedrich Koenig and Andreas Friedrich Bauer , which represented a milestone in the history of printing technology and allowed the production of 1,100 copies per hour. This also heralded the era of the “mass newspapers”.

The lack of political consistency, which the Times was sometimes accused of, did not detract from its success. Their influence was only shaken when the so-called penny newspapers (especially The Daily Telegraph , Morning Star and The Standard ) appeared, which not only gained a far larger readership, but also forced the Times to reduce the price of the paper to three pence to lower. At the beginning of the 20th century, the edition was estimated at around 75,000 copies. Since 1877 it has also been published in a weekly and a two-day edition.

In 1966 the Thomson Group bought the Times from Lord Astor of Hever and the founding family Walter. In the period from December 1, 1978 to November 12, 1979, the publication of the Times was suspended for nearly a year because of a labor dispute that had ignited the planned job cuts through the modernization of the printing plant.

A special feature up until the 1970s was the design of the first page, which was dedicated to the small advertisements, as if the Times were not one of the best newspapers in the world, but a personal forum or a public mailbox.

Portions of this article appear since 2011, out of date to be .
Please help to research and insert the missing information .

The newspaper belongs since 1981 to the media conglomerate News Corporation of Rupert Murdoch . He bought it on February 13, 1981 from the Thomson Group , which wanted to sell The Times and The Sunday Times because of difficulties with the British unions and poor earnings. In the 1980s, several prominent editors and correspondents therefore left the newspaper and switched to the newly founded The Independent , including the well-known Middle East correspondent Robert Fisk .

In October 2011, the Times had a circulation of approximately 417,000 copies. After 216 years as a broadsheet newspaper , The Times was published in compact tabloid format on November 6, 2004 . Since June 6, 2006, the Times has had its own US edition , which is printed in New York City .

Since June 2010, web access to the Times and Sunday Times has cost £ 1 a day or £ 2 a week. The switch to the paid model had a serious impact on the number of readers. The British competitor Guardian reported, based on its own calculations, that only ten percent of the previous readers remained. This has massive effects on advertising income, the market share of newspapers available online has shrunk from 15% to less than 1%.

The well-known Times font was developed for the newspaper .

Commons : The Times  - collection of pictures, videos and audio files