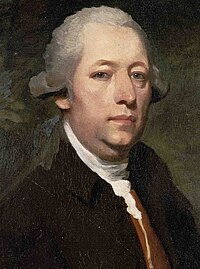 John Walter was born in London as the son of the coal merchant Richard Walter and attended the "Merchant Taylors' School". After his father's death in 1755, he was involved in a flourishing coal business until 1781. He played a leading role in founding a London coal exchange. Soon after 1781 he began working as a marine insurance agent and became a member of Lloyd's . In connection with the American Revolutionary War , however, he speculated and went bankrupt in 1782.

In 1783 he bought Henry Johnson's patent for a new printing method with "logotypes" (see logotype ) and invented some improvements. In 1784 he bought an old printing company in the London borough of Blackfriars , which formed the core of what would later become the printing district .

At first he only printed books and leaflets , but on January 1, 1785, John Walter brought out a small newspaper for the first time under the title "The Daily Universal Register" . From the 940th edition, which appeared on January 1, 1788, he renamed the sheet in "The Times" .

The newspaper was initially a scandal and Walter earned part of his income for several years with news that he did not publish. As was customary at the time, celebrities paid him money to have certain reports suppressed. Otherwise, the first "Times" editor had a peculiar career due to his argumentative temperament. In 1789 John Walter was sentenced to a fine of £ 50, a year in the notorious Newgate Prison and an hour in the pillory for insulting the Duke of York and the Prince of Wales (and later King George IV ) . He also had to assure the judge that he would do well for seven years. Apparently this was not easy for him, as the fine was increased to 100 pounds and the prison term was increased to two years for further abuse. On March 9, 1791, he was finally released after his pardon.

In 1799 he was punished again for a vilification. This time he had quarreled with Peter Leopold Louis Francis Nassau Clavering, 5th Earl Cowper. As early as 1795, Walter had handed the business over to his eldest son William in order to retreat to the then tranquil village of Teddington, Middlesex (now part of the London borough of Richmond upon Thames ). He lived there until his death in 1812.

In 1759 he married Frances Landen (died 1798), with whom he had six children. William Walter handed the business over to his younger brother John Walter in 1803 .