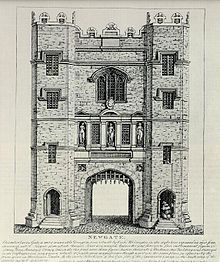 The old Newgate Prison, which was replaced by a new building in the 18th century. 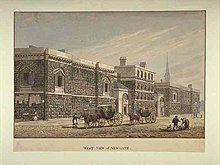 The second Newgate Prison in a 19th century engraving: View from the west of Newgate by George Shepherd.

A cell and galleries in Newgate in 1896

The prison was built in 1188 at the Newgate city ​​gate on behalf of King Henry II and was considerably enlarged in 1236. It served various purposes, including the detention of convicts awaiting execution of the death penalty . The escape protection was not always guaranteed. In 1255 the prisoner John Offrem, who was imprisoned for the murder of a prior , managed to escape. King Henry III was so angry that he had the responsible sheriffs thrown into the Tower and imposed a fine of 3,000 marks (about 4,000 pounds) on the city. The robber Jack Sheppard managed to escape Newgate three times before he had to go to the gallows in 1724 .

The old prison was finally torn down, so that between 1770 and 1778 a new one with a chilling facade made of rough-hewn masonry - designed by the architect George Dance the Elder. J. (* 1741; † 1825) - could be built. As early as 1780, however, it was attacked by insurgents during the Gordon Riots and set on fire. Many prisoners died in the flames and around 300 were able to escape temporarily. Two years later, Newgate was rebuilt again.

In 1783 the London gallows were moved from Tyburn to the Newgate compound. The spectacle of the executions always attracted large audiences.

The social reformer Elizabeth Fry (* 1780, † 1845) protested from 1813 against the inhumane prison conditions in Newgate and called for improvements, which, however, could only be implemented very gradually. It was not until 1858 that the interior was equipped with individual cells.

As of 1868, executions were carried out inside Newgate prison walls. The prison was closed in 1902 and demolished in 1904. Today the Old Bailey Criminal Court stands on the property .

Newgate in horror fiction and novels

Since the early eighteenth century numerous publications have appeared which, under the pretext of moral instruction and educational exhortation, presented the cases of Newgate prisoners - in many cases up to their execution - to the general public. These sensational reports, garnished with macabre details, achieved bestseller editions in England as early as 1750 , which could only be surpassed by the Bible . The popular books, called chronicles or calendars , advertised in the subtitle with keywords such as B. Malefactors' Bloody Register ( Eng . "The culprit bloody directory" ) or Villainy Display'd in all its Branches ( Eng . "Villains, represented in all their varieties" ) and are today all together under the literature term The Newgate Calendar or . Newgate novel summarized.

Newgate Prison also plays a grim role in some of the world's fiction novels, such as: E.g. in Daniel Defoe's Glück und Unglück der Famous Moll Flanders (1722), in Charles Dickens works Oliver Twist (1839), Barnaby Rudge (1841) and Great Expectations (1861) and in Michael Crichton's novel The Great Train Robbery (1975). In the novel series Abby Lynn by Rainer M. Schröder , the protagonist Abby is temporarily imprisoned in Newgate, and in Rebecca Gablé's books , protagonists are repeatedly imprisoned in Newgate for a limited time.

Newgate in the movie

The feature film The Great Train Heist includes an escape from Newgate. Newgate also plays a role in the film V for Vendetta .