This article deals with the year 1461; for the Turkish sports club see 1461 Trabzon .

England / Wars of the Roses

Edward, Earl of March , who after the death of his father, Richard Plantagenet, 3rd Duke of York in December of last year, the House of York in the Rose wars quotes, defeated on Feb. 2 , the Lancastrians under Owen Tudor and Jasper Tudor, 1st Duke of Bedford , at the Battle of Mortimer's Cross . On February 17th the Second Battle of St Albans takes place , in which the Yorkists under Richard Neville, 16th Earl of Warwick , are defeated by the House of Lancaster under Margaret of Anjou .

On March 28, the minor battle at Ferrybridge ends in a draw. But the very next day the bloodiest battle ever fought on English soil takes place: the House of York wins the Battle of Towton against the House of Lancaster , and Edward IV's way to the English throne is free. He is crowned king on June 28th .

The kingdom of Trebizond when it was conquered in 1461, to the south the allied kingdom of the White Mutton under Uzun Hasan 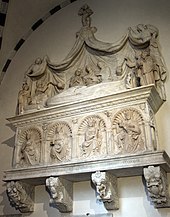 High tomb Giorgio Fieschi in the Cathedral of Genoa