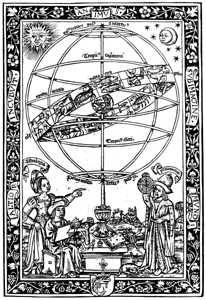 Georg von Peuerbach (also Georg Purbach , actually Georg Aunpekh , scholar name Purbachius ; born May 30, 1423 in Peuerbach in Upper Austria ; † April 8, 1461 in Vienna ) was a humanist and astronomer at the University of Vienna . Through an improved planetary theory, he became a pioneer of the Copernican worldview . He built innovative measuring instruments, introduced the SinusFunction in astronomical calculations and is the world's first university professor specializing in astronomy.

Georg von Peuerbach stood at the beginning of the scientific revolution of the early modern period; this revolution came to an end with the new world system of Nicolaus Copernicus and Kepler . In the 15th century, the planetary movement according to Ptolemy and his epicyclic theory was intensively discussed and improvements were sought. This was necessary on the one hand because the solar year had moved further and further away from the Julian calendar and required a calendar reform , on the other hand, more precise "star books" were necessary for ship navigation . Observational astronomy was revived by both requirements at that time, and this was embodied by Peuerbach.

In 1514 Georg Tannstetter added a history of Viennese mathematicians and astronomers to his edition of Peuerbach's eclipse tables : Viri mathematici . This is an important source also on the life and writings of Peuerbach, because around 20 works by Peuerbach are listed here.

Georg's up-and-coming birthplace of Peuerbach in the fertile hill country of the Hausruckviertel received market rights as early as 1280 and in the 15th century had a learned pastor and doctor of canon law in Heinrich Barucher , who also gave lectures at the Viennese faculty of artists. He must have noticed the boy's extraordinary talent early on. Unlike usual, however, he did not send him to Vienna for preparatory studies at the age of 14, but only much later.

Peuerbach did not enroll at the university until the age of 23 (1446) . His Upper Austrian mentor Barucher apparently ensured a solid pre-university education in a renowned monastery school , probably in the scientifically oriented Stiftsgymnasium Klosterneuburg . He quickly benefited from it because Georg became a Baccalaureus after just 20 months on New Year's 1448 . His teacher Johannes von Gmunden was, like Peuerbach himself, an important representative of the Vienna astronomical school . Von Gmunden then recommended him to the University of Padua , where he gave astronomical lectures in 1449. Peuerbach got to know some former graduates, including Nikolaus Cusanus . He appreciated the clear way with which he peeled the essentials out of the usual mixture of knowledge, myths and astrology .

As a result, Peuerbach even received a (as usual one-year) professorship at the University of Bologna and in 1450 in Ferrara . There he met the famous mathematicians and astronomers Giovanni Bianchini and Toscanelli . He refused Bianchini's offer for a chair and went to Rome , where he lived with Cusanus for a few months and got to know his circle of friends. Soon afterwards he became court astronomer to King Ladislaus of Hungary and later - after his death - to Emperor Friedrich III.

Improvement of the Ptolemaic planet theory

After returning to Vienna, Peuerbach obtained a licentiate in 1452 and a master's degree in 1453 . Thanks to him, the University of Vienna once again had an outstanding teacher of astronomy and philology , just as it did before through Johannes von Gmunden . Peuerbach recognized the shortcomings in the Ptolemaic system and began a revision of the main Ptolemaic script Almagest , the standard work of the time. In contrast to Sacrobosco , he began a new translation of the Greek original and not the Arabic translation. In 1460 the papal envoy Cardinal Bessarion came to Vienna. He commissioned Peuerbach to explain the Almagest. With his pupil Regiomontanus , who came to Vienna to study in 1450, he began to write the epitome for Almagest , which he completed after Peuerbach's early death. This resulted in a new planetary theory that Nicolaus Copernicus used as a starting point.

Together with Regiomontanus, Peuerbach carried out measurements of occultations of planets by the moon (for example Jupiter - covering on August 9, 1451) and lunar eclipses in order to check the astronomical table works. On September 3, 1457 they observed a lunar eclipse in Melk . To determine the time, they measured the elevation angle of the Pleiades star Alkione . To check the 1459 calculated tables of eclipses "Tabulae eclipsium" they observed the lunar eclipse of the year 1460. On 27 December 1460, they used the star Alramech ( Arcturus ) for determination of time and found that the darkness as calculated occurred later for about 5 minutes - a satisfactory agreement .

On the other hand, the planet locations deviated greatly from the calculations. Peuerbach began to work out correction terms for the Alfonsin tables , but he could not finish the work. Johannes Engel resumed work around 1510 and used it in his almanac novum atque correctum . The correction terms could be derived from a planetary theory by the Syrian astronomer Ibn al-Shatir (1304-1375), although the transmission route is unknown. Nicolaus Copernicus , who knew Engel's almanacs, also uses a mathematical planetary model in his Commentariolus that corresponds to that of Ibn al-Shatir.

His corresponding lectures on planetary motions, which were still based on the Ptolemaic doctrine, became so famous that from 1472 they were often printed under the title Theoricae novae Planetarum (picture). The first edition took place in 1472 in the specially astronomical for the purpose of disseminating works of his pupil Regiomontanus and Bernard Walther founded in Nuremberg Offizin . The writings - together with Sacroboscos Sphaera  - became a classic textbook of the 15th and 16th centuries throughout Europe. For many decades, university professors wrote comments and additions to it, for example Philipp Imsser (University of Tübingen) in 1556.

Peuerbach also dealt with astronomical observations and the construction of astronomical instruments. He manufactured instruments for determining the true new and full moons, the most important being the inventions of the ring and folding sundials . With this he had determined the shape of the sundial well into the 18th century. In 1451 he constructed a vertical sundial for St. Stephen's Cathedral . He also constructed an instrument for measuring heights, the quadratum geometricum .

In 1456 Halley's Comet appeared and all astrologers published writings with predictions of impending doom, including Peuerbach. However, his writing contained a short overlooked paragraph in which he tried to estimate the size and distance of the comet from his observations on June 9th and 13th. In the tradition of Aristotle, he did not consider comets to be celestial bodies, but rather as meteorological phenomena in the high atmosphere. His very rough estimates confirmed this assumption, but apparently no one had tried to measure the distance before him. Records have also come down to us from Toscanelli.

Finally, his work on arithmetic has survived. Peuerbach calculated precise sine tables and showed their versatile applicability in astronomy and geodesy . After a long search about the connections between the current position of the sun, day arc and midday height, he came " with God's help to the true knowledge of the facts "

where H is the midday height of the sun, h is its current elevation angle and b is half the arc of the day. This formula was also engraved in Peuerbach's epitaph in St. Stephen's Cathedral in Vienna.

His research on trigonometry not only made many calculations easier, but also made it easier to use astrolabes and quadrants, as the angles could be read directly from the measured sections. He also published astronomical yearbooks, and his eclipses Tabulae eclipsium received numerous new editions.

But Peuerbach is also one of the pioneers of humanism in Central Europe. These new ideas came to Vienna with Aeneas Silvio Piccolomini (later Pope Pius II ), who was secretary in the Reich Chancellery from 1443 to 1455. During this time he gave widely acclaimed lectures on the poets of antiquity . Since 1451 the masters of the university have been reading about Roman poets, including Peurbach about the Aeneid of Virgil and Juvenal .

Peuerbach died on April 8, 1461 in Vienna and, like other outstanding professors at Vienna University, was buried in St. Stephen's Cathedral. Today an epitaph reminds of his burial place there.

The asteroid (9119) Georgpeuerbach and the lunar crater Purbach were named after Georg von Peuerbach . In the Upper Austrian capital Linz there is the Georg-von-Peuerbach-Gymnasium and in the Peuerbach Castle of his birthplace there is a permanent exhibition under the title Georg-von-Peuerbach Exhibition . A 15 times enlarged version of his astrolabe from 1450 is emblazoned on the town hall of Peuerbach .