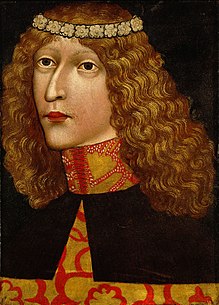 Ladislaus Postumus ( Czech Ladislav Pohrobek , Hungarian V. László , Croatian Ladislav V. Posmrtni ; born February 22, 1440 in Komorn ; † November 23, 1457 in Prague ) was Duke of Austria , King of Bohemia and, as Ladislaus V, King of Hungary . His death ended this "Land Union" and at the same time meant the end of the Albertinian branch of the Habsburg family in the male line.

Ladislaus Postumus was the son of Elisabeth of Luxembourg , the only daughter of Emperor Sigismund from his second marriage to Countess Barbara von Cilli , and of Duke Albrecht V of Austria , who succeeded his father-in-law as King of Germany and Rome as well as King of Bohemia and Hungary. His older sister Anna was born in 1446 with Duke Wilhelm III. married by Saxony , the sister Elisabeth had been the wife of the Polish king Casimir IV. Andrew since 1454 .

Ladislaus was only born after the death of his father Albrecht, which is why he was nicknamed Postumus (the later born). In theory he was Duke of Austria and double king from birth, but his kingship in Bohemia and Hungary was initially controversial. In Bohemia, the Utraquist party opposed his succession to the throne, but a large part of the nobility recognized his claims. At the same time, however, the latter demanded that the young Ladislaus be educated under the tutelage of the Bohemian aristocracy in Prague; only then did they want to crown him king. Like the Bohemian estates, the Austrian estates demanded that Ladislaus be allowed to grow up under their care.

As the daughter of King Sigmund, his pregnant mother was the legitimate heiress of Hungary and immediately after the death of her husband tried to assert the claim to the throne of the still unborn child. The Magyar magnates urged Elisabeth since January 1440 to get along with the far younger King Władysław III. of Poland (his younger brother Casimir IV. Jagiełło was later to marry their daughter of the same name) in order to combine the defenses of both countries against an impending attack by the Ottomans. Convinced that she would give birth to a male heir to the throne, whose claim to the throne would have been jeopardized by this marriage, Elisabeth firmly refused these demands. In the night from 21 to 22 February 1440, shortly before her confinement, succeeded her maid of honor Helene Kottanner , the Hungarian Holy Crown , which was kept in the Plintenburg where the queen had no access to it, secretly from there to Komarno to bring. (This venture is commonly referred to as the “robbery of St. Stephen's Crown”, although it was clearly not a robbery.). To the Polish King Wladyslaw III. and to forestall his followers, Elisabeth had the two-month Ladislaus crowned King of Hungary on May 15, 1440 in Stuhlweissenburg with the St. Stephen's crown. Wladyslaw, who has meanwhile been called to Hungary (as Hungarian King Vladislav I ), was also crowned King of Hungary on July 17, 1440 with a funeral crown . An almost two-year civil war followed, in which Elisabeth was able to assert herself despite financial hardship in western and northern Hungary.

In his wills, Albrecht II had stipulated that the guardianship of his unborn son should be carried out by her and the head of the family of the Leopoldine line together with a Regency Council. Elisabeth initially violated this will when she gave Duke Albrecht VI. of Austria , from whom she was actively supported in her struggle for the successor of her son, appointed her son's guardian. Ultimately, however, she was forced to approach Duke Friedrich V of Austria, who had meanwhile been elected as successor to Albert II as Roman-German king. She pledged this large area in western Hungary and even her own crown to continue the war for her son's successor. On August 23, 1440, Elisabeth handed over her son together with the St. Stephen's Crown to Friedrich and confirmed him as the boy's official guardian. Ladislaus was initially brought up in Wiener Neustadt, Friedrich took over the government of the Duchy of Austria . Elisabeth died on December 19, 1442 in Raab , Ladislaus became a complete orphan, but he had his sister Elisabeth, three years older, as a playmate and the lady-in-waiting Helene Kottannerin as an educator.

After Władysław III. Had died on a campaign against the Turks at the Battle of Varna , Ladislaus was formally recognized as King Ladislaus V of Hungary at a diet in Pest on May 7, 1445 , and the Bohemian Wenceslas crown was now safer than before. The actual government, however, remained with the imperial administrator Johann Hunyadi, who was elected by the Hungarian estates on June 6, 1446 . For another coronation, Ladislaus should come to Hungary personally. However, this was refused by Friedrich, which led his Hungarian opponents to assume that he would keep the boy in custody at Orth Castle as a political pledge . Hunyadi then invaded Austria, but, due to the costly battles against the Turks in the Battle of the Amselfeld on October 18, 1448, he was forced to settle with the Habsburgs. The Treaty of Pressburg , concluded on October 22, 1450, stipulated that Ladislaus should remain with Friedrich until he was 18 and that Hunyadi should rule for him in Hungary until then.

In Bohemia, too, Ladislaus was not immediately recognized as king. After a few years of anarchy, the Moravian nobleman George of Podebrady managed to take the capital Prague in 1448. Friedrich maintained good relations with Georg. In 1451 Frederick transferred the imperial administration to him . Podiebrad decided not to transfer the heir to the throne to Bohemia. From 1450 the demands of the Austrian and Bohemian estates to finally release Ladislaus became more and more urgent, especially since the Bohemian provincial administrator had won the upper hand in a civil war against the Catholic aristocrats.

On October 14th, 1451, under the leadership of Ulrich von Eyczing, 39 gentlemen and knights as well as city representatives from Upper and Lower Austria met at Mailberg Castle in the Weinviertel and formed an alliance against King Friedrich III. The pretext of the alliance was the release of Ladislaus from the guardianship of his uncle, but the main concern of the estates was to strengthen their own influence. At the same time, the Bohemian aristocracy pushed Friedrich, who on March 19, 1452 in Rome to become Emperor Friedrich III. let Ladislaus finally exercise his rights. After his refusal on the grounds that Ladislaus was not yet of legal age, the Catholic nobility tried to have the young king brought to Prague by force . Under the leadership of Heinrich von Rosenberg , a Bohemian army moved to Austria, united with the rebels there and on August 28 began the attack on Friedrich's residence in Wiener Neustadt.

On September 4, 1452, the troops of the united estates under the leadership of Ulrich von Eyczing and Count Ulrich von Cilli, after a brief siege of the emperor in Wiener Neustadt, achieved the "surrender" or "liberation" of Ladislaus. Its ceremonial entry into Vienna took place on September 6th. On January 1, 1453, Johann Hunyadi returned his imperial administration over Hungary to the 12-year-old Ladislaus, and a little later, for the same reason, negotiations with the Bohemian governor Podebrady began in Znojmo. On October 28, 1453 Ladislaus was by the Olomouc bishop Johannes XIII. Haes crowned King of Bohemia; here it was recognized relatively easily. Ulrich von Cilli was able to enforce his influence through Ladislaus against Eyczing and took over the political advice of the young king. In Hungary, Ulrich von Cilli soon became enemies with the Hunyadis . A major factor was that they bore the brunt of the battle against the Ottomans , while Cilli (and with him Ladislaus) remained completely inactive on this issue. After Belgrade was besieged and relieved in 1456, Johann Hunyadi succumbed to an epidemic. While Ulrich von Cilli was staying in Belgrade, he was killed by Ladislaus , a son of Johann Hunyadis. His subsequent execution sparked great indignation in Hungary. Ladislaus went from Ofen to Prague , where he was to spend the last year of his life.

Ladislaus Postumus and Magdalena of France

The death and the consequences

On November 23, 1457, shortly before his planned wedding to Magdalena of France, a daughter of Charles VII , Ladislaus died before his 18th birthday.

The presumption that he was murdered is considered fairly plausible, but has never been proven. Given the sudden symptoms of the disease, some researchers believe that the cause of death was some form of leukemia . The bubonic plague is also believed to be a possible cause of death. After the coffin was opened in 1984 and its skeleton was examined in an interdisciplinary manner, it is now certain that Ladislaus died of lymphatic hemoblastosis, a form of leukemia. His skeleton showed the bone changes typical of the disease.

After several conflicts with armed conflicts, Emperor Friedrich III was finally appointed . in the Duchy of Austria, Matthias Hunyadi (= Matthias Corvinus ) in the Kingdom of Hungary and Georg von Podiebrad in the Kingdom of Bohemia (the latter thus became the only Hussite king in the country). The attempt to create total rule of these three countries in eastern Central Europe (in this case under Habsburg rule) had failed for the second time. With Ladislaus the Posthumous closed by the 1379 died Treaty of Neuberg of Albrecht III. from Austria founded the Albertine line of the House of Habsburg .

Secondary literature, exclusively about the robbery of the St. Stephen's Crown