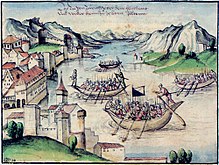 Moctezuma in Codex Mendoza from the 16th century

Coat of arms of the Gilles de Rais

In one of the most widely noticed trials of the 15th century, the French nobleman and war hero Gilles de Rais , one of the first known serial killers in history, is found guilty of heresy and executed by hanging on October 26th with two accomplices.