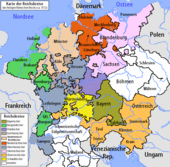 The imperial circles of the Holy Roman Empire 1512, before the imperial reform

The imperial circles of the Holy Roman Empire 1560 , after the imperial reform

In the Ottoman Empire there was a change of the throne: Selim I deposed his father Bayezid II , who died a little later under unexplained circumstances, as sultan and took over rule.

Outside of Europe, the colonial powers Portugal and Spain continue to divide the world among themselves and consolidate their rule in their respective empires through legal regulations and the armed suppression of resistance.

The cultural highlight of the year is the unveiling of Michelangelo Buonarotti's ceiling painting in the Sistine Chapel in the presence of the client Pope Julius II , who in the same year opened the fifth Lateran Council , the aim of which is again a church reform. 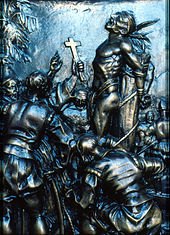 Portal of the Capitol of Havana: the burning of Hatuey by the Spaniards 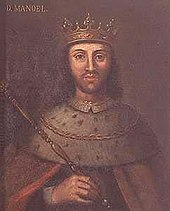 In the course of the Italian wars with Habsburg for hegemony in Europe, French troops under the command of Gaston de Foix , Duke of Nemours , invade Romagna and Veneto in February . France wants to wrest control of these regions from the Holy League, which was founded last year . The French conquer several cities, including Brescia being sacked on a lasting basis. Gaston de Foix knows that the invasion of France threatened by King Henry VIII of England will require a large part of his army to be relocated to France. Therefore, he tries to force the opponent to a decisive battle beforehand. At the end of March, the French march eastwards from Bologna with Alfonso I d'Este , Duke of Ferrara, and begin the siege of Ravenna , which is defended by papal troops. Alerted by the danger of losing his last fortress in Romagna, Pope Julius II demands and receives an army that, under the command of Ramón de Cardona , the Spanish viceroy of Naples , sets out to liberate the city. 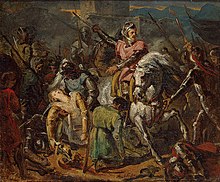 The death of Gaston de Foix in the Battle of Ravenna

On April 11th it comes to the decisive battle. The army of the Holy League is defeated by the French in the Battle of Ravenna , but Gaston de Foix is ​​killed in the battle. The complete victory of the French does not help to secure northern Italy, but rather they must withdraw from the region in August.

After several unsuccessful attempts in the years before, Giano di Campofregoso succeeded with the help of his relative Ottaviano in driving their Ghibelline opponents, namely the Adorno family, from Genoa . Giano was appointed Doge of the Republic of Genoa on June 29th . Antoniotto Adorno subsequently made a pact with the French King Louis XII. to regain power in the Maritime Republic . 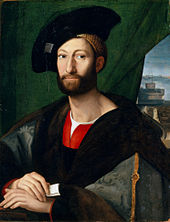 The Medici returned to Florence on August 31st with Spanish help . The republican city government under Piero Soderini had previously put up strong resistance, which was only given up after the city of Prato was captured and sacked on August 29 . A parliamento is convened and a balia is formed that abolishes the Gran Consiglio of the Republic and introduces a constitution similar to that of Lorenzo il Magnifico . Giuliano di Lorenzo de 'Medici and his brother Giovanni de facto become masters of the city, but for the most part refrain from taking revenge. Only the current State Secretary of the Republic and closest confidante of the fled Soderini, Niccolò Machiavelli , is relieved of his office in November and has to deliver a guarantee for future good conduct amounting to five times his previous annual salary, an obligation that he can only fulfill with the support of friends.

Swiss travelers force Massimiliano Sforza to move into Milan on December 15 and officially appoint him as Duke on December 29 . In return, he had to cede the towns of Lugano , Locarno , Mendrisio , the Valle Maggia and the domination of Domodossola to the Confederates . The Bündner get the Valtellina , the Grafschaft Cläven and the Herrschaft Worms . Furthermore, the Swiss demand a one-off payment of 200,000 ducats and then annual payments of 40,000 ducats. The Pope lets Parma and Piacenza occupy under the pretext of old feudal rights . 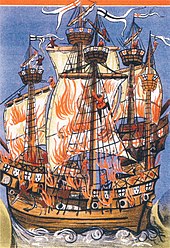 The Cordelière and the Regent

The naval battle of Saint Mathieu on August 10th is the first naval battle in which cannons are used on special gun decks. The battle between an English and a French- Breton fleet off the Breton coast near Brest ends in a draw, but the largest French warship to date, Marie la Cordelière, and the largest English warship, Regent, are sunk. The French captain Hervé de Portzmoguer dies along with nearly 1,600 French and English sailors and marines.

In the course of a further imperial reform , Emperor Maximilian I divided the Holy Roman Empire into 10 imperial circles at the Reichstag in Trier in order to enable better administration of the empire by the imperial regiment. In addition to the six imperial circles that have existed since 1500, there are also the Burgundian Empire , the Austrian Empire , the Upper Saxon Empire and the Kurrheinische Reichskreis . There are also numerous territories and estates not circled in the Holy Roman Empire , including the territories in Imperial Italy , the countries of the Bohemian Crown and the territories of the Old Confederation . The imperial circles existed until the empire was dissolved in 1806 . 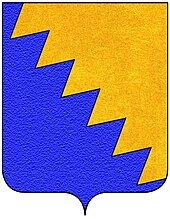 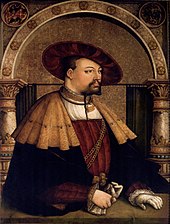 The peace of Malmo pulls on April 23 the line under the Danish-Hanseatic War of 1510 and 1511 between the other cities of the Wendish towns League allied Lübeck and Denmark . In the peace that Lübeck's mayor Thomas von Wickede was looking for, when it became clear that no clear winner was to be expected in the even war, the Hanseatic League had to tolerate Dutch trade with Denmark in the future.

The Swedish ruler Svante Sture dies on January 2nd . The clergyman Erik Trolle is elected as his successor by the Imperial Council. But the election is challenged by Svante's son Sten Sture the Younger , who is ultimately elected as imperial administrator in a new ballot . Erik Trolle then withdrew from active policy on the Reich. 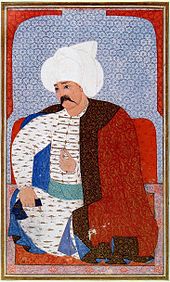 Selim I , called Yavuz “the rigors”, deposed his father Bayezid II as sultan on April 24th and took over rule in the Ottoman Empire . Under his rule, the empire's rise to world power continued. Bayezid withdraws to Dimotika , but dies on May 26 under unknown circumstances on the journey. Selim's first act as ruler is the order to execute his brothers and all his nephews, a procedure that has been institutionalized in the Ottoman Empire since Mehmed II . In order not to force his son Suleyman to do the same thing later, he refrains from any further contact with his wives. 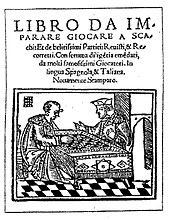 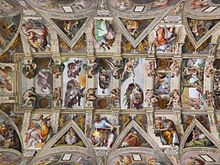 After more than four years of work, Michelangelo Buonarotti's ceiling painting in the Sistine Chapel is ceremoniously unveiled on November 1st in the presence of the client, Pope Julius II . They show scenes from Genesis on a total of 520 m² with 115 larger-than-life characters. In particular, the fresco The Creation of Adam becomes one of the most famous works in art history. 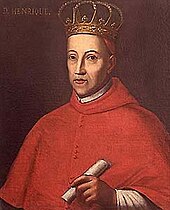 Henry I of Portugal 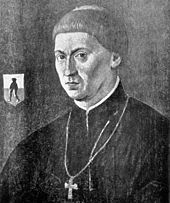 Grave of Gaston de Foix in the Castello Sforzesco in Milan

Depiction of Sofia in the margrave window of St. Sebald in Nuremberg