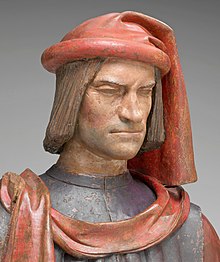 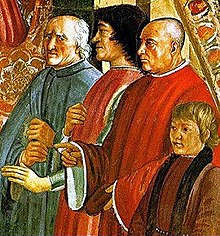 Lorenzo de 'Medici (called il Magnifico "the Magnificent"; * January 1, 1449 in Florence , † April 8, 1492 in Careggi ) was a banker and politician in Florence from the Medici family .

Lorenzo was the third child and eldest son of Piero di Cosimo de 'Medici and Lucrezia Tornabuoni . Together with his brother Giuliano di Piero de 'Medici , Lorenzo was prepared for his future role through extensive humanistic training. After the death of his father in 1469 he became the leading statesman of the Republic of Florence . He had no legal authority in the republic, but in fact he ruled the city. He ruled behind closed doors, in the background, in that he was able to rally the people who held the official positions. Only those who were sponsored by Lorenzo could begin a political career.

Other important prerequisites for the governance of Lorenzo were the immense wealth of the family, which had been generated above all through the Banco Medici under the direction of Lorenzo's grandfather and predecessor, Cosimo ; the strong propaganda and also a manipulation of the constitution, among other things the introduction of new medici-loyal councils as well as manipulation of the electoral procedure.

In the Pazzi conspiracy in 1478, in which the Florentine Pazzi family , the Archbishop of Pisa Francesco Salviati and Pope Sixtus IV wanted to kill the leading figures of the Medici clan, Lorenzo's brother Giuliano was killed in an assassination attempt. However, Lorenzo narrowly escaped the assassination attempt, with which the coup failed. The Pope and Naples then declared war on the Republic of Florence. However, thanks to Lorenzo's skilful and yielding action towards Naples, a peace treaty could be negotiated a short time later. This considerably strengthened Lorenzo's position in Florence. His most important foreign policy achievement was maintaining the balance between the five great powers Rome, Florence, Naples, Milan and Venice .

Promotion of the fine arts

Lorenzo received the nickname il Magnifico ('the splendid') through his generous support of the fine arts: literature, painting, sculpture and also a little in the field of architecture. The artists supported included Sandro Botticelli and Michelangelo Buonarroti . Under his rule, Florence became the most important city of the arts during the Renaissance . Of the few architectural examples that testify to Lorenzo's support, the church of San Salvatore al Monte should be mentioned in particular . Lorenzo il Magnifico himself was involved in its planning from 1474.

Cosimo had already supported the circle of the Florentine Platonists . Platonism, cultivated especially in Florence, grew under the aegis of Lorenzo into one of the formative currents in the philosophy of the Renaissance, with the ideas of Neoplatonism in particular inspiring the humanists. Giovanni Pico della Mirandola , Angelo Poliziano and Marsilio Ficino, among others, worked in Florence . The state philosopher Niccolò Machiavelli was also strongly influenced by the ideas of the era. At that time, however, there was no “Platonic Academy” as an institution in Florence; this previously common term is misleading, as it was only a loose circle of humanists without an institutional framework, as recent research has shown.

Lorenzo not only promoted and protected artists, but also had a detailed knowledge of architecture and literature himself. He wrote poems in the local language, which testify to his considerable talent in this field. 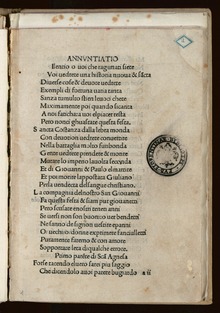 The political and cultural-political successes, however, were opposed to an economic failure, particularly in financial terms (decline of the Banco Medici ). Reasons for this were Lorenzo's lack of economic knowledge and unfavorable developments in the environment (dissolution of the Burgundian empire, which was heavily indebted to the Medici; Wars of the Roses in England; Ottoman expansion and the related Ottoman-Venetian war ). Lorenzo's reputation was damaged by the fact that in 1472 he allowed his troops to sack the revolting city of Volterra .

It turned out to be disastrous that Lorenzo failed to adequately prepare his successor for the task of governing the state. The system of indirect exercise of power could only function as long as the population had confidence in the head of the Medici clan. Lorenzo had a total of ten children, including Giovanni, who was Pope from 1513 to 1521 under the name Leo X. His successor was the first-born Piero di Lorenzo de 'Medici , who, however, was not up to the demanding task due to incompetence, overestimation of himself and a lack of interest in state affairs. After a wrong political decision (alliance with Naples against Milan) he was jointly responsible for the French invasion of Italy in 1494 and was driven out by the Florentines, who were responsible for the inevitable surrender of their city. The penitential preacher Girolamo Savonarola took over the rule in his place .

Like his father and grandfather, Lorenzo suffered from arthritis throughout his life , which severely restricted his mobility. Lorenzo il Magnifico died in 1492 at the age of only 43. The exact cause of death is still unclear, but third-party negligence such as poison is excluded. He is buried in the Basilica di San Lorenzo in Florence in the New Sacristy of the Medici Chapel .