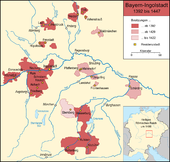 The partial duchy of Bavaria-Ingolstadt 1447

Ludwig VII of Bavaria-Ingolstadt dies on May 1st in the captivity of his cousin Heinrich XVI. of Bavaria-Landshut on the Burghausen Castle . Since his son Ludwig VIII , who delivered him into captivity, died two years ago, and the third Bavarian Duke Albrecht III. of Bayern-Munich does not make any claims, the Duchy of Bavaria-Ingolstadt becomes the property of Heinrich in its entirety. From the third division of Bavaria in 1392 , only two duchies remain.

After the death of Duke Filippo Maria Visconti on August 13th, the Golden Republic of Ambrosiana is proclaimed in Milan , although there is a legal successor in Charles de Valois , Duke of Orléans , son of Filippo's sister Valentina Visconti . The republic will only last until 1450 , however , because Francesco I. Sforza , who married a daughter of Filippo Visconti, also lays claim to rule in the Duchy of Milan and sets about enforcing this claim by force of arms.

The Soest feud escalates: Landgrave Wilhelm III. von Thuringia leads a Saxon-Thuringian mercenary army in support of the Cologne Elector Dietrich II. von Moers against the insurgent and imperial town of Soest , which is supported by Münster , Paderborn and several Hanseatic cities , among others . The Archdiocese of Cologne even offers a unit of Hussite warriors after the city has placed itself under the sovereignty of Adolf II von Kleve-Mark . The troops cross the Weser near Holzminden and march, pillaging and plundering through the county of Lippe, which is on the Klever side, towards Lippstadt . Münster, Herford , Paderborn and other cities see themselves compelled to give up their support for the Soest side, at least temporarily, for fear of the troops. The mercenaries almost completely destroy the city of Blomberg and besieged Lippstadt in the summer without being able to take the well-defended city. The troops then move to Soest. Adolf's son Johann von Kleve is in charge of the city's defense himself, and this siege, too, has to be broken off after a short time without any results. Both sides finally begin to show a willingness for peace and conclude a ceasefire in winter.

Shāh Ruch , ruler of the Timurids , dies on March 13 during a campaign against one of his grandchildren in the winter camp at Rayy. He is succeeded by his only living son, Ulugh Beg , who has previously served as governor in Samarkand and is famous as an astronomer . As a ruler, however, he is less successful because the takeover of power in Herat does not go smoothly. All the princes are fighting against one another on unclear fronts, and he cannot be sure of the loyalty of his son Abd al-Latif either, a situation that is being exploited by external enemies who invade the country. 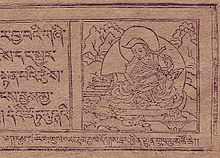 The Tibetan astronomer Phugpa Lhündrub Gyatsho completes his most important work padma dkar po'i zhal lung ( instruction of the (King of Shambhala) Pema Karpo ). In it he reconstructs the true astronomy and calendar calculation, which was taught by the Buddha according to the Tibetan tradition and later allegedly falsified in the Kālacakratantra . In doing so, he creates the basis for a computing system that will be decisive for the majority of Tibetan astronomers for creating the Tibetan calendar, calculating solar and lunar eclipses and calculating the movement of planets including the sun and moon over many centuries.

After the death of Pope Eugenius IV. On Feb. 23 and his funeral in St. Peter's Basilica , the three-day takes place in the Dominican convent Sopra Minerva in Rome Conclave 1447 held with the participation 18 cardinals and at the end on March 6 Tommaso Parentucelli the Pope is elected, who gives himself the name Nikolaus V. The election is generally seen as a surprise, Nicholas is the first civil pope for more than 200 years and is considered the first humanist on the papal throne. The enthronement of the new Pope takes place on March 19th . The new Pope first has to deal with the antipope Felix V, who was elected at the Council of Basel in 1439 . 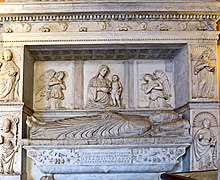