Mary of Burgundy Hunting, Pursued by Death ; Miniature from the Berlin Hours of Maria von Burgundy and Maximilian 1480-82 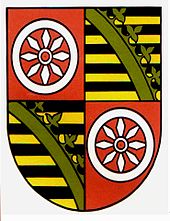 Coat of arms of the administrator of the Archdiocese of Mainz

Diether von Isenburg , Archbishop and Elector of Mainz and thus Archchancellor of the Holy Roman Empire at the same time , dies on 7 May. Adalbert von Sachsen becomes his successor the very next day . However, since at 15 he is not yet the formal age to be ordained a bishop, he is only used as an administrator for the time being.

First page of the Münsinger contract

The Münsinger Treaty of December 14 reunited the two parts into which the County of Württemberg had been divided since the Nürtinger Treaty of 1442. The inheritance disputes between the Uracher and the Stuttgart part are thus settled after 40 years. Count Eberhard V. im Bart , residing in Urach , takes over the government of the country and moves his residence to Stuttgart , the capital of the other part of the country. The line of succession is based on the incumbent Count in the Stuttgart part of the country, Eberhard VI. fixed. The contract, which was negotiated with the participation of representatives of the Württemberg estates , stipulates the indivisibility of the state and the primogeniture in Württemberg in a legally binding manner . The Münsinger Treaty prevents the fragmentation of Württemberg and thus creates an important prerequisite for the elevation of Württemberg to a duchy in 1495. 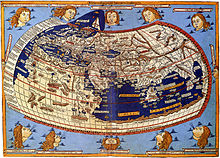 Sarcophagus of Mary of Burgundy