The Emirate of Granada ( Arabic إمارة غرﻧﺎﻃﺔ, DMG Imārat Ġarnāṭa ), also known as the Kingdom of Granada or Sultanate of Granada , was a Muslim state in Andalusia in present-day Spain from 1238 to 1492 . Its capital was Granada . It was founded and ruled by the Nasrid dynasty , the last ruler of which was Muhammad XII. "Boabdil" lost the throne on January 2, 1492 to the Catholic Kings . With the end of the Emirate of Granada, the last Muslim-controlled territory of the Iberian Peninsula ( al-andalus ) disappeared .

When the Arabs and Berbers came to the Iberian Peninsula , there was already a settlement with two small settlements in the area of ​​the later city of Granada : Iliberis (Elvira), behind which the Albaicín and the Alcazaba are now believed, and Garnata , on the hill opposite which was more of a district of Iliberis . The Arabs called this place Garnat Al-Yahud (= "Granada of the Jews").

In 711 the Berber leader subjugated Tariq (طارق) Iliberis with the help of the Jews. Two years later, after a rebellion , Abd al-Aziz definitely ruled the entire territory. In 740 there was another North African Berber rebellion that spread across the entire peninsula. On this occasion, Syrian troops rushed to fight them. They defeated the Syrians on the territory of the peninsula, and for this reason they were given lands in various places, including Iliberis , which was then already called "Elvira".

During the time of the independent emirate of Cordoba , in the year 756, the Arab population was already to be found in two settlement centers: in the Albaicín and in the Alhambra ("the red one",الحمراء). Years after Almansor's death (المنصور) In 1010 there was a city already known as Garnata , which was destroyed in a civil war - clan disputes between Berbers and Muslims were frequent at that time.

History of the Empire of Granada

The first Taifa kingdom of the Zirids

In 1013, the North African Zirid dynasty founded by Zawi ibn Ziri took Garnata and constituted itself as an independent Taifa kingdom , which existed until its extinction in 1090; from this point on the Almoravids ruled (المُرَابطون), and although the internal struggles continued, public buildings were built and the city beautified. When the internal and external conflicts continued without solution, the governors asked a new people from northern Africa for help in 1146: the Almohads .

But after the battle of Las Navas de Tolosa, which was costly for the Almohads, anarchy spread across all Taifa kingdoms. With the uprising of Ibn Hud near Murcia and its expansion to all of Andalusia, the Almohad regime finally collapsed. Ibn Hud could not defend the land against Castile and León ; in the years 1230/31 he suffered several defeats and had to pay tributes to the Christians . 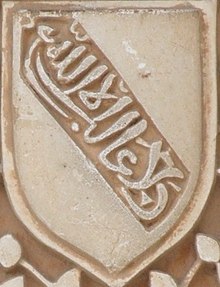 Wa-lā ghāliba illā llāh , There is no victor but Allah - the great Nasrid motto

The Nasrid Emirate of Granada consolidated after the defeat at Las Navas of Tolosa. It was the last Islamic state on the peninsula and lasted until 1492. There is little data on its state organization and institutions, but it was basically those that developed with the Caliphate of Cordoba : viziers, kadis, tax collectors, etc. ., endowed with the Malik as legislator and with absolute power; the structure of the Nasrid Empire was considerably more absolute than that of the Christian kings, as there was no nobility to offer resistance.

The emirate of Granada and the Nasrid dynasty have their origins in the person of the Arab-born Muhammad Yusuf ben Nasri 'Alhamar' , who was proclaimed sultan in 1232 . Muhammad ibn Yusuf ibn Nasri was recognized as sultan by the oligarchies of Guadix , Baza , Jaén , Málaga and Almeria . In 1234 he declared himself a vassal of Córdoba , but only two years later (1236) Ferdinand III conquered . Córdoba and Muhammad ibn Yusuf ibn Nasri seized power in Granada. Muhammad I. was opposite Ferdinand III. obedient, which on the other hand guaranteed him a certain independence.

In 1237/38, Muhammad ibn Nazar (or Nasr, called al-Hamar "the Red"الحمرbecause he had a red beard) the old Alhambra. He was the founder of the Nasrid dynasty (which had twenty-three Granadin emirs) and re-founder of the Emirate of Granada. But in 1246 Ferdinand III seized it. the city of Jaén to consolidate its conquests in the Guadalquivir Valley . Muhammad I had to Ferdinand III. pay homage and acknowledge as Lord in order to achieve 20 years of peace and thus to preserve his territory. The emirate survived, although it lost territories, until 1492. The monarchy was preserved thanks to the concessions to the Christians, who in turn had to consolidate their conquests, and thanks to the treaties with the Merinids of the Maghreb , who built on Islamic solidarity.

Muhammad I acquired the right to create an administrative structure in his empire that was recognizably similar to that of the Umayyads of Cordoba . In addition, it had a very favorable geographical position for the defense, in order to establish relations with the Christians and the Muslims of the Maghreb. Nevertheless, the area should always remain overpopulated, which on the one hand brought problems and on the other hand a rather diverse economy.

Under Muhammad II al-Faqih (1272-1302) the Merinids of Morocco began to send troops to Andalusia, so that the Nasrids had to recognize the Merinids as their overlords. It was not until 1340 that the Merinids of Castile were decisively defeated in the Battle of the Salado and had to retreat to Africa. From now on, the Nasrids could no longer expect support from North Africa in the fight against Castile. Economically, Granada became dependent on Aragón and Genoa , which controlled the emirate's foreign trade via the ports of Almería and Málaga .

In the years 1305/06, Granada seized the North African port city of Ceuta in order to bring the Strait of Gibraltar under its control, thus creating a major alliance of the Merinids with the Christian Spanish kingdoms. In 1309 , thanks to Aragonese help, the Kingdom of Fez recaptured Ceuta.

The most splendid reigns were those of Yusuf I (1333-1354) and Muhammad V (1354-1359), during which culture and the economy reached their peak. During this time the Nasrids were able to regain control of the Strait of Gibraltar and expand trade. At the same time, Granada was greatly expanded and there were several palaces in the Alhambra , u. a. the Löwenhof, built.

In 1384 the Emirate of Granada wrested the city of Ceuta from the Kingdom of Fez, which it was able to recapture three years later. In 1415, Ceuta was conquered by the Portuguese , who later had to cede it to Spain.

From these kings on, the dynastic battles of the pretenders to the throne should be the general tenor. The inheritance disputes made the existence of the emirate of Granada dependent on the benevolence of the kings of Castile and the balance with the kings of Aragon .

When several family clans fought for power in the empire in the 15th century, the emirate began to decline. Granada gradually lost its territory: Even if some attacks by Castile could be repelled, Gibraltar was lost for good in 1462. Although the empire was temporarily pacified and consolidated under Abu l-Hasan Ali (1464–1482), Castile gained overwhelming preponderance after the establishment of the personal union with Aragon through the marriage of the two rulers (1479). The war for Granada, on the side of the Christian kingdoms led by the married couple Ferdinand II of Aragón and Isabella I of Castile , began in 1482 and ended only ten years later due to the difficult geographical conditions. United by the personal union of the two kingdoms that dominated all other Spanish kingdoms, Spain occupied itself with the systematic conquest of the emirate, while the Muslims exhausted their forces in a civil war. Granada had to surrender in 1492. This meant the end of Muslim statehood on the Iberian Peninsula.

At the time of its greatest expansion, the emirate of Granada included what are now the provinces of Cordoba , Cádiz , Almería , Málaga and Granada, as well as parts of what is now the province of Jaén and what is now the province of Seville , but it became smaller until the 15th century, including only the current ones Provinces of Granada, Almería and Málaga. The city of Granada turned into one of the most prosperous cities in Europe and had a population of 50,000. In the Albaicín, the artisans and the rest of the population lived in the plain to the south with large trades, customs offices and the madrasa ,المدرسة (Koran school).

Christian coat of arms of the kingdom after the fall 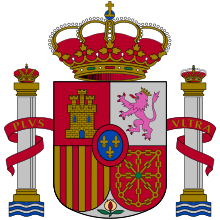 The pomegranate still forms the lower tip of the Spanish national coat of arms .

After the Castilian conquest on January 2, 1492, the Kingdom of Granada formed part of the Crown of Castile. Its symbol - the pomegranate - was integrated into the coat of arms of the Spanish monarchy and has its place there to this day.

In the surrender agreement of 1491 , the Muslims were guaranteed freedom of religion, but the political, economic and religious leaders emigrated to Africa or the Middle East . The remaining Muslims , some of whom were forced to convert, called Morisks, were expelled from Spain (1609, 1611) after the uprisings in Granada (1499 and 1569-1571).

The Kingdom of Granada existed as a political entity until the end of the " old regime " in 1833.

At the time of the Nasrid rule, Granada was only referred to as a "kingdom" in the Christian chronicles, as the Spaniards equated the title " emir " with that of a king. It was officially referred to as " Reino de Granada " only after 1492 , after it was incorporated into the Kingdom of Castile . The rulers of Granada had changing titles. The first ruler, Muhammad I ibn Nasr , had himself proclaimed “ Sultan ” in 1232 , but later had to declare himself a vassal of Castile. Most of the rulers of Granada carried the title "Emir" according to the Arabic sources.