Ferdinand the Saint, miniature from the 13th century 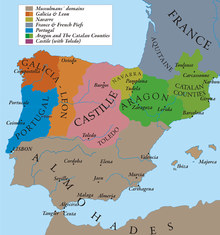 Castile and the Iberian Peninsula (around 1210)

Ferdinand was born in 1199 as the son of King Alfonso IX. Born of León and Berenguela of Castile , daughter of Alfonso the Noble of Castile. Pope Innocent III However, the parents' marriage was annulled in 1203 because they were too closely related, because Berenguela's great-grandfather Alfonso VII was also her husband's grandfather. After the death of his uncle Henry I , Ferdinand became king of Castile in 1217 and, after the death of his father (1230), of León , which he united with Castile as well as Asturias and Galicia to form an indivisible kingdom that was inherited by the eldest son. This laid the foundation for the greatness of Castile and ultimately for the liberation from Moorish rule in Spain.

Ferdinand gradually won after several victories over the Moors, especially at Jerez de la Guadiana (1233), the capture of Cordoba (1236), the conquest of Jaén (1246), Seville (1248), Cadiz (1250) and other cities Control of large parts of the north and south of the Iberian Peninsula . The Castilian rule then extended to the Mediterranean.

Only the kingdom of Granada remained under the Moors, but under Castilian suzerainty. The result was a massive emigration of the Moors from the lands recaptured by the Christians; those who remained were harshly oppressed. In general, Ferdinand was a great enemy of any heretical opinion.

Ferdinand donated several bishoprics, founded the Cathedral of Toledo and the University of Salamanca , made a great contribution to civil legislation through the Código de las Partidas completed by his son and the Romansh translation of the code of law applicable to the Moors of Córdoba. 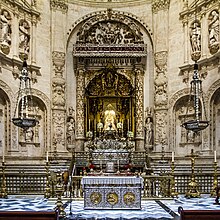 View of the altar of the Capilla Real in Seville Cathedral

Ferdinand was canonized by Pope Clement X in 1671 for his services to the Catholic faith .

On November 30, 1219 Ferdinand married the daughter of the Roman-German King Philip of Swabia , Beatrix (called "Isabella" and "Elisabeth" in Spain) in Burgos . With her he had the following children:

After Elisabeth's death in 1235, Ferdinand and Johanna († 1279), daughter of Simon von Dammartin from the Mello family and Marie de Ponthieu , Countess of Ponthieu and Aumale , married (before August 1237). They had the following children: 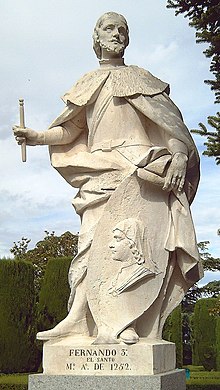 Ferdinand III. is depicted on the city arms of Seville and Corrales del Vino .