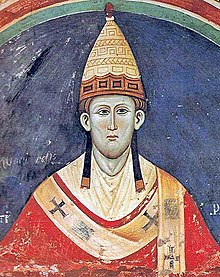 Pope Innocent III (Fresco in the monastery of San Benedetto in Subiaco , Latium , around 1219)

Pope Innocent III gives a collection of his sermons to Abbot Arnaldus von Cîteaux, who kneels in front of him. In a copy of the Sermons from the first half of the 13th century, it is the last of the four full-page title miniatures. (Prague, Czech National Library, XXIII. F.144, fol. IVv).

Lotario di Segni was born around the turn of the year 1160/61 on the Segni fort in Gavignano (about 60 kilometers southeast of Rome ) as the son of Count Trasimondo from the house of Conti and Claricia Scotti. The school education in St. Andrew's monastery in Rome was followed by studies at the Paris University with the famous theologian Pierre von Corbeil and from 1178 to 1187 a study of law in Bologna . The ordination as subdeacon by Pope Gregory VIII personally in November 1187 was followed in 1190 by the rise to cardinal deacon of Santi Sergio e Bacco .

Lotario di Segni was considered one of the best canon lawyers of his time. During his time as a cardinal deacon, the writings De quadripartita specie nuptiarum ("On the four-part form of marriages"), De missarum mysteriis ("On the secrets of mass celebrations") and De miseria conditionis humanae ("On the misery of human existence") were written. , written 1194 to 1195. They already contain some theological foundations of his later remarks on the pontificate (“What is right, what is due, what is useful”).

In De miseria conditionis humanae , Lotario dealt with the imperfections of human existence: “Man is formed out of earth, received in guilt and born in pain. He acts badly, although he is forbidden, he commits shameful things that are not fitting, and places his hopes in vain things [...]. It ends up as the prey of the flames, as food for the worms, or it rots. ”Based on a sharp rejection of everything physical -“ but from you comes only phlegm, urine and feces [...], you leave behind a hideous stench ”- and a condemnation of the human soul as sinful and depraved Lotario came to a pessimistic view of man. The work follows the traditional doctrine of hell as a place of eternal punishment for sinners: "The punishments change, but never cease". At the same time he emphasizes the primacy of the clergy over the laity . He saw the Pope "placed in the middle between God and man, on this side of God but beyond man, less than God, but more than man". Accordingly, the Pope is vicar of Christ , governor of Christ on earth, not only successor of Peter . 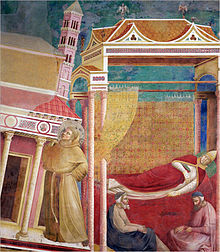 Dream of Pope Innocent III. (lying on the right) how Saint Francis of Assisi (left) supports the tilting church

On January 8, 1198, Lotario was elected Pope in the second ballot. His consecration took place on February 22nd, he took the name Innocent III. at. Although Walther von der Vogelweide mocked the new Pope's young age ("Owê, der bâbest is ze junc. Help, hêrre, dîner cristenheit"), Innocent, at an elected age of 37, was even a little older than some of his predecessors Office.

After taking office, Innocent III dedicated. his time, above all, of the legal fixation of the papacy and its final establishment as a secular power. Innocent tried to achieve this goal primarily by expanding the territorial possessions of the Papal States. Under his direction, the church property expanded to double its size through recuperation (recovery) in central Italy. The most important areas that he claimed for the patrimony of Petri were Tuscany , the Marches of Ancona and the Duchy of Spoleto . Internally, he secured the rule through clever family policy and nepotism . The later Pope Gregory IX. (1227–1241) was his nephew and became chaplain of the Curia during the tenure of Innocent in 1198, in 1206 Cardinal Bishop of Ostia and thus dean of the College of Cardinals.

In 1198 Innocent called the Fourth Crusade , but it never reached the Holy Land . The plundering of Zara in 1202 and Constantinople in 1204 also gave the crusade a great deal of political volatility and potential for internal Christian conflict, and contributed considerably to the final schism between the Catholic and Orthodox Churches.

Innocent played a significant role in the struggle for the throne in the Holy Roman Empire from 1198 to Roman king was in 1196 the first two years of Frederick II. , The son of Emperor Henry VI. was chosen while the latter was still alive. After Heinrich's death in 1197, Friedrich was not recognized in the empire. Instead there was a double election of the Staufer Philip of Swabia and the Guelph Otto of Braunschweig (Otto IV.) As Roman kings. Frederick himself became King of Sicily in 1198 as the heir of his father and was under the tutelage of the Pope.

Innocent made capital out of the Roman-German disputes between the Guelphs and the Staufers , he secured land for the Papal States and insisted that the Pope decide who would be crowned emperor, and therefore also a participation and in the case of the throne dispute Right to decide in the election of a king would be granted (decretals Venerabilem 1202). Innocent's view was that the Pope could only crown someone as emperor whom he found worthy. Correspondingly, only those who he felt to be worthy of the office of emperor could become king ( papal approbation ). As early as 1199, Innocent sided with Otto, who in return promised him protection. From around 1203, however, Philip was increasingly able to assert himself militarily in the empire, which is why Innocent negotiated a settlement with Philip. With his murder, however, this compensation became obsolete and Otto was the sole Roman king. On October 4th, 1209, Pope Innocent crowned Otto in Rome.

However, when Otto broke his promise of protection in 1210 and conquered parts of the Papal States, Innocent excommunicated him and supported the Staufer party in the empire. At his suggestion, the German princes of the Staufer party met in September 1211 in Nuremberg, where they re-elected Frederick II as king. In the period that followed, Friedrich was able to assert himself in the empire and thanked the Pope for his initiative with the Golden Bull of Eger , which legally recognized the papal state in its existing form. Friedrich also had to renounce the rule as Sicilian king, which passed to his son Heinrich . Innocent wanted to at least reduce the embrace of the Papal States by a Staufer Empire. However, Friedrich broke this promise after his confirmation by the Fourth Lateran Council and the death of Innocent when he himself took over control of Sicily again and had Heinrich elected as Roman king.

Through his Europe-wide commitment to strengthening the Church, Innocent had made it lord of Aragon , Portugal , Sicily , Bulgaria and even England by 1212 . Innocent advocated the crusades and pursued a policy of promoting and integrating newly founded and at times suspected heresy orders , such as the humiliates , Dominicans and Franciscans ; the brothers of the Order of the Holy Spirit enjoyed his special favor.

Innocent was considered a relentless opponent of heresy . This was also the prelude to the Inquisition established in 1233 . Innocent ensured the massive persecution of the Cathars and other deviants in all papally controlled states. As early as 1199, he had issued a ban on reading the Bible at non-church meetings, which was directed against groups such as the Waldensians and Cathars. Also in 1199 he ordered the confiscation of the goods of supporters of heretics in the decretal Vergentis in senium in the area of ​​his secular jurisprudence.

Under the leadership of Simon IV. De Montfort , the Albigensian Crusade took place from 1209 to 1229 , in which the church played a leading role at Innocent's behest. The massacres of the Cathars in Béziers and Minerve are mentioned again and again in this context .

In November 1215, Innocent opened the Fourth Lateran Council , where he called for the Fifth Crusade to the Holy Land and had 70 edicts passed in the Catholic Church, some of which still apply today. He died on July 16, 1216 at the age of 55 while traveling to Lombardy near Perugia and was laid out, robbed and buried in the cathedral there. The newly appointed bishop of Akko Jacques de Vitry writes about it (in medieval orthography): Post hoc veni in civitatem quandam que Perusium nuncupatur, in qua papam Innocentium inveni mortuum, sed nundum sepultum, quem de nocte quidam furtive vestimentis preciosis, cum quibus sci < licet sepeliendus> erat, spoliaverunt; corpus autem eius fere nudum et fetidum in ecclesia reliquerunt. Ego autem ecclesiam intravi et ocul <a> ta fide cognovi quam brevis sit et vana huius seculi fallax gloria. (Then I came to a city called Perugia, where I found the dead but not yet buried Pope Innocent. At night people had robbed him of his precious robes with which he was to be buried. But they had his body almost naked and Already left behind in the church smelling of decay. But I entered the church and saw as an eyewitness how short and vain the deceptive glory of this world is Spoof law .

In 1891 his body was transferred to Rome and taken by Pope Leo XIII. buried in San Giovanni in Laterano .