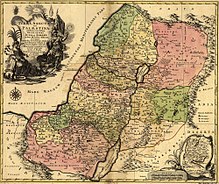 Holy Land ( Hebrew ארץ הקודש Éreẓ haQodeš , Latin : Terra Sancta , Greek Άγιοι Τόποι Hagioi Topoi , Arabic الأرض المقدسة, DMG al-Arḍu l-Muqaddasa ) is a name for the region that is referred to in the Hebrew Bible as Canaan , Eretz Israel or Promised Land and historically comprised various political entities of the Israelites . The region has been called Palestine since the Roman Empire . The name Holy Land expresses its importance for the Abrahamic religions Judaism , Samaritans , Christianity , Islam and Baha'i .

History of the designation

The awarded sanctity of this region originates from its importance as the land of promise that Abraham and the people of Israel , according to the Old Testament of God was promised. In the writings of Judaism, the term “Holy Land” or “Holy Ground” is generally not used, where “Promised / Promised Land” or “ Eretz Israel ” is usually chosen. (Derived thereof also about the extremist combat term Greater Israel .) Mentions of Canaan / Israel as a "sacred land", however, find themselves with Jerusalem as its capital, in Zechariah ( property 2.16  EU ) and also in the deuterocanonical writings Book of Wisdom ( Weish 12.3  EU ) and in the 2nd Book of the Maccabees ( 2 Makk 1.7  EU ).

Until the High Middle Ages , secular names were mostly used for the region, depending on the current administrative structure for example Judaea , Palaestine , Syria Palestine or simply Syria. The spread of the expression "Holy Land" goes back to the 4th century when, with the end of the period of persecution and the finding of the "true cross of Christ" in Jerusalem by Empress Helena, the interest of Christians in the scenes of the Bible , especially in Jerusalem , woke up. The “Holy Land” was now the destination of private pilgrimages: The earliest documented journey of an (anonymous) Christian pilgrim from Bordeaux to the “Holy Land” took place in 333. It led from Bordeaux to Jerusalem and is recorded in an itinerary (travel guide) written in Latin with details of the way stations. Many events from the Old Testament and the life of Jesus have since been localized, and memorials and churches have been built. The pilgrimage to the "Holy Land" was henceforth important for the salvation of the soul .

After a short Persian rule at the beginning of the 7th century, the Islamic conquest of the Levant followed , so that Islam now also gained a foothold here, which, like Christianity, could refer to Jewish roots. Designations for the region of Palestine in the oldest Islamic scriptures are usually translated as “blessed land”, but in later centuries the term “holy lands” came up, as numerous important Islamic shrines were built.

The Islamic rulers, which changed over the centuries, increasingly obstructed the Christian pilgrimage routes, while the number of pilgrims continued to rise. In 1009, Caliph Al-Hakim destroyed the Church of the Holy Sepulcher in Jerusalem, one of the greatest shrines in Christianity. This was taken as the occasion for the First Crusade in 1095 , the main objective of which was to conquer and secure the pilgrimage sites and routes in order to “defend” Christianity from the Saracens and Seljuks . Thus, from the 11th century onwards, the church stylized the “Holy Land” as a political battlefield to a place that had to be “recaptured” for its own religion. At the end of the 13th century, the Crusader states ceased to exist.

Christian pilgrimages, especially to the “Holy City” of Jerusalem, became exceptionally expensive (alternative pilgrimage sites therefore gained in importance), but they remained possible and are particularly desirable for pious Christians. The “Holy Land” continued in the Christian tradition and was finally understood again as an apolitical term for the locations of the Old and New Testaments. Only in a few fundamentalist and / or enthusiastic circles is the “Holy Land” still assigned a political role for Christianity.

The region continues to be at the center of religious conflicts between representatives of Abrahamic religions, most recently in the Middle East conflict .

Christians in the Holy Land

The Christians in the Holy Land make only a part of two percent of the total population of Israel, Palestine and Jordan and has, by about 400,000 believers in 13 traditional churches (five Orthodox churches , five Uniate Eastern Churches , the Roman Catholic Church , Anglican Communion , Evangelical Lutheran churches ). The Latin Patriarchate of Jerusalem has 63 parishes and 42 schools with a total of 19,000 students. It is largely supported by the Order of Knights of the Holy Sepulcher in Jerusalem .