Empires of the Great, Rum and Kerman Seljuks. The lighter coloring shows the kingdom of the Qarakhanids. The dates show the battles of Dandanqan (1040) and Manzikert (1071)

The Seljuks , also Seljuk Turks , Seljuk Turks or Seljuqs ( Turkish Selçuklular , Persian سلجوقيان Saljughiyan , DMG Salǧūqiyān , Arabic سلجوق Saljuq , DMG Salǧūq , pl.السلاجقة as-Salajqa , DMG as-Salāǧiqa ) were a Turkish princely dynasty ruling from 1040 to 1194, which founded the empire of the Greater Seljuks , which stretched across Central Asia , Iran , Iraq , Syria , Anatolia and parts of the Arabian Peninsula and reached its heyday between about 1047 and 1047 AD and had 1157.

The Seljuks were Sunni Muslims and initiated the Turkish conquest of Anatolia with their victory at the Battle of Manzikert in 1071.

The Seljuks were a branch of the Turkish tribal association of the Oghuz who immigrated to Transoxania in the 8th century . The dynasty was named after Seljuk (around 1000), khan of the Oghuz tribe of Kınık . Towards the end of the 10th century, Seljuk and his people converted to Islam . He had four sons, Mîkâ'îl, Isrâ'îl (or Arslan), Mûsâ, and Yûnus. The Oghuz played a significant role in the clashes between the Turkish Qarakhanids and the Persian Samanids , which led to political tensions among the Oghuz tribes. The nomads belonging to Seljuk and their warriors broke away from the tribal association of the Oghuz and migrated on. In 1025, Mahmud of Ghazni captured Seljuk's son Arslan and held him hostage; this did not survive the imprisonment.

Under the sons of Mîka'îls, Tughrul Beg ( the falcon ) and Chaghri Beg , the Seljuks brought Chorâsân under their rule in 1034 and ousted the Ghaznavids in 1040 with the victorious Battle of Dandanqan . In 1055, Tughrul entered Baghdad , ending the hundred-year Bujid patronage . The Seljuks thus became the new protecting power over the Abbasid Caliphate in Baghdad. Under Tughrul Beg, the Seljuks subdued large parts of Persia and Iraq in 1055 . He received the title of Sultan from the Caliph in Baghdad . Tughrul moved the capital of the Seljuk Empire to Rey , near modern-day Tehran .

Alp Arslan (1063–1072) led the Great Seljuk Empire to the peak of its power. In 1071 he defeated the Byzantine Empire at the Battle of Manzikert and thus initiated the Turkish colonization of Anatolia . Between 1071 (Battle of Manzikert) and 1243 ( Battle of Köse Dağ ) up to a million Turks immigrated to Anatolia. They did not form the ethnic majority in Anatolia, but were the only group spread throughout the area. The conquest of Anatolia by the Seljuks from the 11th century marked the culmination of the massive migrations of the Turkic peoples that took place from the 8th century. Anatolia became "Turkey" (or "Turchia") in European sources (for the first time in Latin) from the 12th century. Under Alp Arslan, his successor Malik Şâh (1072–1092) and the Persian vizier Nezâm al-Molk , the sultanate reached its political and cultural peak. 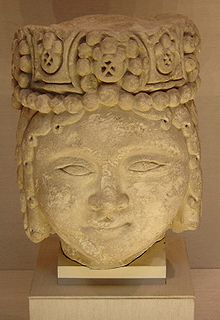 With the assassination of the vizier Nezâm al-Molk by the Assassins and the death of Sultan Malik-Shah (1092), struggles for the throne soon broke out within the Seljuks. These led to the division of the empire into Khorasan / Transoxania and the two Iraqs (located on the territory of western Iran and Iraq ) in 1118. In the 11th century, the Sultanate of the Anatolian Seljuks arose in Anatolia - with the capital Konya .

Under Sultan Sanjar (1118-1157), son of Malik Shah II, who ruled in Khorasan, Seljuk rule had its last heyday. However, he suffered a defeat against the Kara Kitai near Samarkand in 1141 , was overthrown a little later and tried in vain to rebuild the Seljuk Empire until his death. The Khorezm shahs inherited it with Kypchak and Oghuz mercenaries and conquered Central Asia and Iran by the end of the 12th century . In 1194 they eliminated the last Seljuk ruler of Rey. In Anatolia, after 1243, the Rum Seljuks came under the rule of the Ilkhanate ; their Sultanate of Konya dissolved by 1307. The rising Ottomans inherited the Seljuks in Anatolia at the beginning of the 14th century.

The Seljuk Turks who came from Central Asia knew how to make the best of the existing administrative structures. The establishment of the Seljuk Empire brought with it, among other things, the dethroning of the Arabic language as the sole lingua franca in the Middle East, since the Seljuks, who did not bring their own highly developed Turkish cultural or literary heritage with them, took over the cultural and literary heritage of Persia, so that the Persian language became their administrative and cultural language. The Persian culture of the Rum Seljuks in Anatolia is considered particularly splendid. Only after the collapse of the Seljuk central power in the 14th century did the Turkish language gradually develop as a parallel language in government circles and in literature. The Persian influence on Ottoman civilization was to remain strong well into the 19th century.

The difficult balance between Persian-Islamic and Turkish-nomadic elements could not prevent conflicts. Especially in the east of the Persian world, and particularly in Transoxania, after the collapse of the Samanids and Ghaznavids, there was, at least initially, a marked decentralization of power and a relapse towards feudal structures. The Seljuks ruled over an empire without fixed borders, and so certain areas could be given back or sold to the native tribes at certain times. As a rule, the local lords and princes were allowed to continue to rule as feudal lords in the peripheries of the empire. But they were obligated to pay tribute to the Seljuk Sultan.

Toghrul Tower: Built in the 12th century as a memorial and burial place for Toghrul Beg , south of present-day Tehran

Especially in the early days, the Seljuks maintained the nomadic traditions of their Oghuz ancestors, which they largely gave up after converting to Islam. Although the Turkish Seljuks, as an aspiring great power, became increasingly Iranian over time due to the establishment of the Persian written language in the Islamic world, Turkish traditions and dialects were nevertheless able to develop, especially among the nomadic population outside the cities, due to their Oghuz (Turkish) past long received. After the founding of the dynasty, the court language of the Seljuks was Persian, which they had already adopted at the beginning.

Persian literature and poetry were generously promoted by the Seljuk rulers .

The importance of Seljuk art in the larger context of Islamic art lies primarily in the fact that it established the dominant role of Persia, comparable to that of Italy in European art , and thereby also shaped the development of Persian art of later centuries.