The title of this article is ambiguous. Further meanings for Turks , Turk and Turkic woman are listed under Turks (disambiguation) .

Share of population of Turks by provinces in different countries

The Turks ( Turkic Turkler ) are an ethnic group whose main settlement areas are in Anatolia , Cyprus and Southeastern Europe . In many countries of the world there is a large Turkish diaspora , mainly in European countries and within them especially in Germany . Most of the Turks live in the Republic of Turkey , named after them by Mustafa Kemal since it was founded in 1923 , the successor to the Ottoman Empire , in which they make up the majority of the population.

The popular name Turk is first mentioned in Chinese chronicles of the 6th century as T'u-küe or Tujue and was the name of a clan within a larger nomadic tribal confederation that was called “Turk” and whose origin cannot be clearly proven. With the rise of the "Turk", the name was transferred as a political name to a number of other nomads and peoples, and finally, through a process that has not yet been fully understood, it was adopted as a general name for an entire family of languages and peoples - initially by Muslims Scholars, later also in Europe. The name for the Turkish population of Anatolia is derived from this.

The following important information is missing from this article or section:
The emergence of Turkish nationalism in the Ottoman Empire in the late 19th century and the post- Ataturk secularization
Help Wikipedia by researching and pasting it .

Today's Turks can be placed in the linguistic and ethnic context of the Turkic peoples . The settlement area of ​​the oldest people known as Turks was in eastern Central Asia , in an area that stretched from the Altai Mountains to the Tianschan in the west and from Lake Baikal in the north to the Altun in the south. As early as the end of late antiquity , the first Turkish empire arose there, that of the Gök Turks , who played an important role in the history of Central Asia for about two centuries from the middle of the 6th century . This is where later migrations began, which led to the establishment of various empires such as the Karakhanids , Seljuks and Ottomans . They also led Turkish-speaking groups to the Middle East and Anatolia . 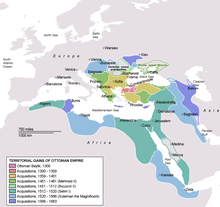 The rise of the Turks to a major Islamic power began as early as the 11th century when the Greater Seljuks , a family clan of Oghus origins, conquered a vast area that stretched from the Mediterranean to Central Asia . The Seljuks made possible the Turkish conquest of Anatolia with the victorious battle of Manzikert in 1071, as a result of which the Byzantine administration and defense of Asia Minor collapsed .

After the conquest of large parts of Anatolia by the Turkish tribal warriors under the leadership of Suleiman ibn Kutalmiş , a Seljuk prince, the latter made himself independent from the Greater Seljuks. Both he and his son and successor Kılıç Arslan I were killed in clashes with the Great Seljuks, which led to confused conditions in Asia Minor. In the wake of the Crusades, the Byzantines were able to recapture large parts of the peninsula. The descendants of Kılıç Arslan were finally able to stabilize the Sultanate of Rum founded by Suleiman , to prevail against other Turkish competitors and also to push back the Byzantine rule. The Sultanate of Rum represented the first cultural and political climax of the Turkish rule in Anatolia. After the defeat in the Battle of Köse Dağ (1243), the Sultanate came under the suzerainty of the Mongols and finally dissolved towards the end of the 13th century. While the east of the empire fell under direct Mongol rule, small Turkish principalities (→ Uc ) made themselves independent in the west , continued the border war against the Byzantine empire and, with few exceptions, eliminated Byzantine rule in Asia Minor by the beginning of the 14th century. One of these principalities was that of the Ottomans, who had fled the Mongols to the land of the Rum Seljuks. This development and the political events in Central Asia (defeat of the Seljuks against the Kara-Kitai , conquests of the Khorezm Shahs and the conquest of the Mongols ) shaped the immigration of the Turks. The immigration of the Ogus tribes, other Turkish ethnic groups, and Mongolian elements ran in waves from the middle of the 11th century to the 15th century. These communities have always been polyethnic and political in character. Its members were either born into the community or had joined it. It is estimated that between 100,000 and 300,000 “Turks” arrived in Anatolia by the 12th century, where they met two to three million long-term residents. Presumably they made up the relative majority in Anatolia in the 13th century and the absolute majority in the 15th century at the latest. In a report on the crusade by Friedrich Barbarossa in 1190 ( Historia Peregrinorum ) the term “Turkey” appears for the first time in occidental sources. In the 13th century it is used in many European sources. In Arabic, the term barr al-turkiyya (Turkish country, Turkey) has been used since the beginning of the 14th century.

Even if details are controversial, there is agreement among the authors that the religious, social and ethnic transformation of Asia Minor into a Muslim and Turkish country took place very quickly within a few decades, first in Central Anatolia and later in Western Anatolia. Christian populations to a significant extent could only survive in the areas of Eastern and Southeastern Anatolia, which were already Islamically dominated before the Seljuks, as well as in the areas of Central Anatolia (Cappadocia), which became the heartland of the Anatolian Empire of the Seljuks, and the areas that only became part of the Successors to the first two Ottoman rulers Osman I. and Orhan I. were conquered from the middle of the 14th century. This also resulted in diverse religious and ethnic penetrations. People of Turkish origin made careers in Byzantine military service and rose (after conversion to Christianity), like the Axuchoi , to the Byzantine nobility. Conversely, the confidants of the first Ottoman rulers include people such as Köse Mihal and Evrenoz Bey , who, according to their names and tradition, were of Byzantine and Christian origin and who were part of the Ottomans before they converted to Islam. In addition, even before the Ottoman conquest of Southeast Europe, there were members of Turkic origin who were partly close, partly more distant ethnic relatives of the Anatolian Turks. After converting to Islam, they merged with the Ottoman conquerors; to the extent that they remained Christians, some authors see them as the ancestors of the Gagauz .

As a result, Turkish quickly established itself as the colloquial language between the individual sections of the population. Alongside Arabic, Persian was the most important educational and literary language. All the Rumseldschuken chronicles were written in Persian. After the fall of the Rumseldschuken Empire, Turkish began to emerge in official use and in literature. When the ruler of the Karaman Oğulları Mehmed Bey took possession of Konya in 1277 , he gave the order that only Turkish should be used in the State Chancellery. From the 13th century, Anatolian literary products have been preserved in the Turkish language, and from the end of the 13th century, Turkish also gained importance in state documents. Among the Christian population, Syriac Aramaic, Armenian and Arabic were the main educational languages. Arabic was replaced by Ottoman in kadi registers, foundation deeds and inscriptions in the Ottoman Empire by the end of the 16th century.

Despite its various pejorative uses in historical and literary texts of the Ottoman Empire, the term Turk or Türki as a popular or language name was not limited to nomadic or peasant population groups.

The Anatolian Seljuks were followed by the Turkish Ottomans, who soon afterwards brought large parts of Anatolia under their rule and conquered Constantinople in 1453 . With mighty campaigns, the Ottomans conquered an empire that stretched from Armenia to Hungary , from the southern Russian steppe to North Africa. Large parts of the Arabian Peninsula and the Mediterranean area also belonged to the Turkish Empire. Regardless of the Turkish language prevailing at court and in the military and administration, the Ottoman state was not based on an ethnic basis, but was a purely dynastic rule, which the sultan especially with the members of his household ( kul : legally roughly slaves and freedmen) exercised. Ethnic affiliation to Turkishness did not provide access to power and wealth, rather the stratum of leading functionaries was mainly recruited from compulsory Islamicized (see boy reading ) members of the non-Muslim subject peoples. Only externally, for example by the Europeans, was the state referred to as the Turkish Empire , its Muslim inhabitants as Turks and its sultan as the Great Turk . Similarly, the Arab Muslims referred to their non-Arab co-religionists in Anatolia and Southeastern Europe as Turks . So did the sultan's non-Muslim subjects. The traditional system of recruiting was only abandoned during the upheavals and national crises of the 17th and 18th centuries. Even native Muslims could now enter into an obligation relationship with the Sultan as kul , for example join the Janissary Corps, and in contrast to relatives who were previously evicted, they could also marry and pass on their status to their descendants. The development of the modern Turkish state and nation stood at the end of the often broken development that this initiated.

There are also a few Baha'is , Christians , Jews , Neo (gök) Tengrists and non-denominationalists .