The sixth century is considered the last century of late antiquity and also the first of the early Middle Ages . The end of the Great Migration Period fell in the middle of the 6th century .

The Western Roman Empire disintegrated decades ago: since 476/80 there has been no separate emperor for the west of the Imperium Romanum , and in Central and South-Western Europe post-Roman empires are beginning to form under mostly Germanic rulers on the ruins of the collapsed empire Theodoric's Ostrogoth empire in Italy , Visigoths and Suebi on the Iberian Peninsula , the empire of the Franks under the Merovingians , Burgundians , Thuringians , Gepids in Hungary and Transylvania , Vandals in North Africa , Sardinia and Corsica .

In the 6th century, however, the formal and, in some cases, factual sovereignty of the Eastern Roman emperors was still largely unchallenged in the West. Emperor Justinian has had his generals conquer North Africa, Italy with Sardinia and southern Spain since 533; In 565, after the restauratio imperii, he reigns over an empire that extends from Gibraltar via Italy and the Balkans to Egypt , Syria and Georgia - a final high point in late Roman history and at the same time a possible date for the “ end of antiquity ”. The emperors after Justinian no longer speak Latin, and Ostrom is increasingly being transformed into the Greek Byzantium of the Middle Ages.

The Justinian plague has raged in the Mediterranean region since 541, claiming numerous victims in several waves over decades before the disease disappears from Europe in the 8th century , only to break out again in 1347 .

From 568 the Lombards invade Italy; this is traditionally considered to be the end point of the late ancient migration. The Bavarians are mentioned for the first time around 550 and populate the northern foothills of the Alps . Slavic peoples (e.g. Wends ) immigrate into the former East Germanic areas depopulated by the migration of peoples . Around this time the Slavs are also present in the Balkans, who moved to a permanent settlement south of the Danube from the 580s, although the conquest of the Slavs in the Balkans was delayed by the Balkan campaigns of Maurikios (from 592). Together with the Lombards, the originally Central Asian Avars invade the Hungary / Eastern Austria area . The empire of the Franconian Merovingians reached its greatest extent for the time being around 560 and after 562 it entered a phase of weakness due to internal turmoil. The Arian Visigothic kings occur 589 to Catholic Christianity over.

In England, the Anglo-Saxons are increasingly harassing the native Romano-Celtic-Christian rulers. The defensive struggle probably gives rise to the legend of King Arthur . The Celtic Church of England merged with the Roman Catholic Church towards the end of the century . In Scandinavia small kingdoms that operate the Baltic Sea trade are gaining strength . The Vendelzeit begins in Sweden .

Near and Middle East

From Syria to Pakistan and to the limits of the Gobi , the extended New Persian Empire of the Sassanids under Khosrow I. at the height of his power. With a Persian attack in 540, after the break of the Eternal Peace of 532, a new war between the East and the Sassanids begins - the Roman-Persian Wars  - which lasts until 630 (with two short interruptions) and enables Islamic expansion .

Around 560 the Persians annihilated the empire of the Hunnic Hephthalites through an alliance with the Turks , who turned against their former allies a little later and attacked the Sassanids in 572 in alliance with the Eastern Romans. However, these can assert themselves in the two-front war.

Around 570 the Prophet Mohammed was born , who, according to Muslim tradition, received the Archangel Gabriel around 610 and thus became the founder of a new world religion .

The Imperial China has 420 in the Southern and Northern Dynasties split, until the Sui Dynasty one 581 the kingdom for nearly 40 years back, with economic recovery and cultural reorganization. Buddhism begins to spread in China via the Silk Road , and it also extends to Korea and Japan . Here the ancient Kofun period ends and the Asuka period begins in 582 with the adoption of Buddhism as the state religion, or in 590 with a Buddhist imperial dynasty. This goes hand in hand with the spread of Chinese writing in Japan. 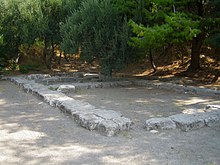 The birth of the Prophet Mohammed , from the Jami 'al-Tavarikh (roughly: Universal History ), written by Raschīd ad-Dīn