Prokopios of Caesarea (Προκόπιος, Latin Procopius Caesarensis , in German usually called Prokop ; * around 500 in Caesarea Maritima ; † around 560 in Constantinople ) was a late antique Greek or early Byzantine historian of the 6th century AD. He is considered to be the last great historian of antiquity and as the most important source at the time of Emperor Justinian .

Prokopios probably came from a privileged Hellenized family from Caesarea Maritima ( Greek. Παράλιος Καισάρεια) in Palestine and enjoyed obviously a rhetorical and legal education, probably at the law school of Beirut , but perhaps also in Caesarea or Konstantin Opel . From 527 to 540 or 542 he was a consiliarius or assessor (Greek πάρεδρος) and thus legal advisor to the Eastern Roman magister militum Belisarius . The entire field post went through his hands, so he was at least well informed about the military and diplomatic events, and in this way he had access to many actors. However, his work, which is formally and linguistically strongly based on the classics of ancient historiography, often shows a certain tendency towards entertaining anecdotes , and his statements about foreign peoples are sometimes of dubious value. Procopius took part personally in Belisarius campaigns against the Sassanids , Vandals and Ostrogoths , after 542 he probably stayed mainly in Constantinople and wrote his works there. As the assessor of an army master, he must have held at least the rank of vir spectabilis ; the Central Byzantine Suda even calls it vir illustris . If so, he was not only formally but also de facto a senator. Johannes von Nikiu also refers to him as patricius and prefect.

Perhaps Procopius was identical with the Prefect of Constantinople, who, according to Johannes Malalas 561/62, investigated a conspiracy against Justinian, but this remains uncertain. It is usually assumed that Prokop died before Justinian's death in 565; there is no reference to the peace treaty with the Sassanids in the year 562, which Prokop would have mentioned with certainty if he had lived through it. 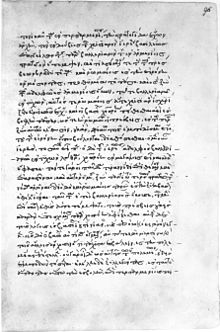 Around 550, Prokop wrote a war history in Greek of the wars of Emperor Justinian up to 550 (east) and 553 (west). The work is also often referred to as Histories or Bella and comprises eight books.

Books 1 and 2 deal with the Persian theater of war ( Sassanids , see also Roman-Persian Wars ) up to the 540s. Books 3 and 4 describe the struggles against the Vandals in North Africa, books 5 to 7 the wars against the Ostrogoths in Italy . The first seven books were finally completed in 550/51 and published together. Book 8 was only finished in 553/54, has its own short foreword and, as a "colorful story", offers a summary of the further military conflicts in various theaters of war (both in the west and in the east) up to the autumn of the year 553.

Prokop's histories are based on the model of Appian (ie according to geographical aspects), stylistically they are based on Herodotus and Thucydides , which is already clear in the prefaces. The histories are not only very comprehensive in terms of content, they are also on a high stylistic level and arrange the material skillfully and by no means unintentionally. Due to their digressions, they represent much more than a pure chronicle of war, but can certainly be viewed as the history of Justinian's time. For retrospectives, for example in the 5th century, Prokop used partly written works as sources, for example Priskos and Eustathios of Epiphaneia . Otherwise he could mainly fall back on his own experience, for which he will have already made notes; Due to his position, he also had partial access to official documents and was able to talk to eyewitnesses.

Prokop's other works are the buildings ( De Aedificiis ) and the famous so-called "secret story". In the buildings , a presumed commissioned work, in which Prokop went into six books on Justinian's comprehensive building program in Constantinople (Book I) and in the provinces (except Italy), the emperor (but partly also Belisarius ) was praised panegyric . The criteria by which Prokop selected the places and buildings described have so far been poorly researched; so it is unclear why Antioch is dealt with in detail, whereas the no less important Alexandria is treated only in a few sentences. Books 5 and 6 may also not have been completed, but may have remained in the drafting stage (the note-like drafting suggests this); The lack of treatment of Italy, which Prokop knew well, suggests that the buildings may have remained unfinished.

According to most scholars, the work was written between 553 and 555. Researchers such as James Evans and Michael Whitby , on the other hand, have rather pleaded for it to be written around 561 and suspect that Prokop died before the work was completed. The work is handwritten in two clearly different versions, a short ("z") and a long ("y"). According to the current state of research, the latter seems to receive a number of later additions that did not come from Prokop himself.

In contrast, the secret story ( Historia Arcana or Anekdota , mentioned for the first time and so called in the Suda ), which most likely was not published during the lifetime of the emperor and Prokop and was written either in 550 or (less likely) in 558, is a pure scandal story and diatribe ( psogos ) . Either the text was to be integrated into the Bella after Justinian's death , or it was intended from the beginning as a secret script for oppositional circles. In it Justinian and his wife Theodora I , but also Belisarius and his unfaithful wife Antonina are scourged. How and how the enigmatic work was handed down is unclear; It was first mentioned in the 10th century, which is why it was previously assumed that it was a later forgery. For decades, however, it has been considered certain that the anecdotes actually come from Prokop. The purpose, interpretation and background of the work are still very controversial in research.

Even if the descriptions in the anecdota, in view of the completely contrary image of Justinian in the buildings, at first glance throw a crooked light on Prokop's character, his works are nevertheless the most important source for Justinian's reign. Averil Cameron tried to explain the contradictions between the works by saying that Prokop believed that this was the only way to provide a complete picture of his time. Procopius repeatedly mentions his intention to write a church history as well, but if he should have realized his plan (which is unlikely) the work is completely lost.

The level of representation in Prokop's works, especially in the histories , is to be considered very high overall; in fact he was the only (surviving) historian of late antiquity , alongside Ammianus Marcellinus , who could compete with the famous models ( Herodotus , Thucydides , Polybios and Tacitus ). Prokop, who was based formally and linguistically on classical authors such as Herodotus and Thucydides, later served as a model and source for many authors. His work must have been widespread, as it has survived in an unusually large number of manuscripts and was also continued by other historians who consciously followed him (see below). John B. Bury formulated the importance Prokop in his History of the Later Roman Empire ( history of the late Roman Empire ): "It was one of the glorious chapters of the Justinian age, to have produced an author who are considered the most outstanding Greek historian since Polybius must. ”Even in modern research, its source value is generally estimated to be very high. Our picture of Justinian's time is still based to a large extent on Prokop's depiction, although attempts have recently been made to break away from his work. Prokop's work is still one of the most intensively evaluated and researched sources on late antiquity.

Prokop used a powerful language, interspersed with classicisms , and wrote good Attic style - which, however, may have made reading difficult for his contemporaries, with the exception of the educated upper class, which Prokop's presentation also aimed at. The late antique everyday Greek of its time had already changed a lot, but can still be described as ancient Greek and certainly left traces in the language of Prokop. His account is spiced with many anecdotes and he had a firm (but not always objective) judgment. He built in hidden (and in secret history open) criticism of Justinian's person; Criticism of rulers was, however, a genre feature of ancient historiography, so that ultimately it is difficult to decide what Prokop actually thought of Justinian. In later sections he also criticized Belisarius , whom he had first praised in the highest tones. Overall, with regard to Prokop's judgment, considerable inconsistencies and contradictions can be established within the history of war .

In the history of war , the work most closely indebted to classical tradition, Prokop remains at least superficially objective and reveals a clear view of events. He divides his material more according to (actual or supposed) contexts than according to chronology. While on the one hand he feels bound to the facts known to him, on the other hand he does not shy away from at the same time imposing his interpretation of things on his readers and manipulating his material through the selection and arrangement of the facts: Prokop's criticism is largely personal criticism. For example, he never criticizes the institution of the empire itself, but only the politics of Justinian, whom he often accuses of hesitation or mistrust towards his generals, which inhibited the war efforts of Eastern Europe. Prokop was close to conservative Senate circles, whose interests were affected by Justinian's policies. In secret history , the emperor is even denigrated as a "demon prince" who wanted to plunge the empire into ruin. In religious questions Prokop stood up for a tolerant Christianity, so he may not have taken a liking to the emperor's rigid religious policy. The fact that he was actually a pagan, as was sometimes suspected earlier, is very unlikely and has been generally disproved since Averil Cameron's fundamental study. The extensive (but not total) lack of Christian references can be explained by Prokop's classicist approach.

However, in the opinion of some researchers, there are indications that Prokop, even at the end of his work, might no longer see the classicist style he cultivated as no longer appropriate. The catastrophes that afflicted the Eastern Roman Empire (plague epidemics, earthquakes, barbarian incursions) could no longer be explained according to classical thought patterns, so that Procopius pointed to the rule of God, which defied human logic, as an explanation. This may also be one reason why the historiography based on the classical model in Eastern Europe soon fell silent for a long time and instead church history gained ground. None of his successors reached his level: Prokop's work was continued by Agathias , this by Menander Protektor , who in turn was the last late antique historian Theophylactus Simokates to build on . At the beginning of the 7th century the tradition of ancient historiography also ended in Eastern Europe (see also Byzantine historiography ). However, the histories of Prokopius remained known and popular in Byzantine times and, after a break, served as a model for many historians. In humanism they were printed in 1607 for the first time ( De Aedificiis already in 1531, the Historia Arcana until 1623).

Apart from the first seven books of the histories , which were undoubtedly published in 550/51, the question of the exact dating of the other works has long been debatable. An early dating (everything up to 553/54) contrasts with a late dating ( buildings and secret history only around 560), without a clear answer being possible. At the moment, however, most researchers prefer early dating.