The Project Gutenberg (PG) is an accessible via the Internet and created by volunteers digital library . In September 2018, more than 57,000 mostly English-language e-books can be read and downloaded free of charge on the project's website . One of the partner projects is the Gutenberg-DE project , which primarily offers German-language literature.

In Project Gutenberg, e-books are created from public domain literary texts. For this purpose, the books were originally typed by hand, uploaded to the project's server and finally proofread. Book scanners and text recognition software have also been used increasingly since the 1990s . The texts on offer have been available on the Internet since the mid-1990s.

The books are available in various data formats available: as ASCII - text files (only the new editions in format UTF-8 ), as EPUB and Mobi for the Amazon Kindle (both with and without pictures) as well as HTML files. The latter can be read directly online in the web browser. All data can be downloaded individually as well as in larger packages - in suitable sizes for CDs or DVDs. Files are offered as HTTP , FTP and peer-to-peer downloads (via magnet links ).

In addition to electronic texts, there are also pictures, films, audio files and other document types to a lesser extent. Some files are subject to copyright, in these cases the authors have given their consent to be included in the project.

The project is supported by the Distributed Proofreaders for proofreading . 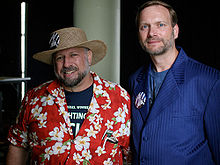 Project Gutenberg is the oldest digital library in the world. It was founded by the American Michael S. Hart and began operations in 1971. The name giver was the inventor of modern letterpress Johannes Gutenberg . The first document was published on December 1, 1971.

The corpus consists predominantly of English-language works, but books in other languages ​​are also increasingly being included.

In addition to literary works, the decoded human genome of the Human Genome Project has been available since November 2002 .

In addition to written works, there are also audio books .

All files of Project Gutenberg can be downloaded and redistributed free of charge; The only restriction on re-use is that the opening credits of Project Gutenberg must always remain unchanged. If the redistributed text has been changed, it may no longer be referred to as Gutenberg text. The project is based on US law and expressly points out that the copyright laws of the respective country in which the user lives may provide otherwise.

The project has already published more than 54,000 works, including more than 700 German-language books. A large part of the published works is prepared (proofreading) by the Distributed Proofreaders organization .

Geoblocking against users in Germany

Since March 1, 2018, users using a German IP address have been excluded from using the entire offer . For technical reasons, this initially only applied to users who are connected to the Internet via an IPv4 address; IPv6 addresses were also recorded from mid-March 2018.

The project reacts to a judgment of the Frankfurt am Main Regional Court obtained by S. Fischer Verlag , according to which works by Thomas Mann , Heinrich Mann and Alfred Döblin , which are already in the public domain in the USA , but still enjoy copyright protection under German law may not make them accessible in electronic form in Germany. The rights of use remain with the publisher until the copyright protection expires.

The block, which was set up as a precaution and which should only apply temporarily, sometimes also affects users who do not dial into the Internet from Germany.

The S. Fischer Verlag criticized the practice of Project Gutenberg because it meant that the vast majority of texts in the public domain were no longer freely accessible, which was not the aim of the lawsuit. This suggests "from the publisher's point of view the conclusion that one wants to instrumentalize the users and get them to protest against the publisher because one does not want to accept the judgment of a court". On the other hand, Project Gutenberg faced the risk of being sued for other titles.

The Higher Regional Court of Frankfurt am Main confirmed the decision of the Regional Court with a judgment of April 30, 2019 - Az. 11 O 27/18. There is a non-admission complaint against the judgment at the Federal Court of Justice .