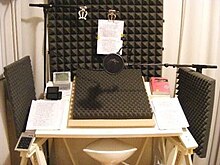 Example of a location for professional readings

The name of the medium goes back to the first hearing library for the blind in Marburg , founded in 1954 at the Deutsche Blindenstudienanstalt . The audio image itself, stored on clay rollers or wax sheets, was created at the end of the 19th century. In 1890, for example, a two-minute audio image of the Franco-Prussian War was staged under the title The Bombardment of Paris . In addition to marching music, the recording contained military commands and battle noises. Even then there were recordings of game scenes, short readings or humorous interludes.

The development of the phonograph and the first marketable records by Emil Berliner changed the media landscape enormously at the beginning of the 20th century (together with the invention of film and radio). In the 1920s, an audience for sound recordings soon developed, after which the record companies signed not only musicians but also writers and cabaret artists. Poetry readings by Thomas Mann or Erich Kästner were no longer tied to a place or a specific time - you could hear them at home at any time and at will.

After the Second World War , Deutsche Grammophon produced its first audio books. In collaboration with the theater, Goethe's Faust I was created in 1954 . This was followed by Schiller's Kabale und Liebe , Jedermann by Hugo von Hofmannsthal and Samuel Beckett's The Last Volume . In addition, the Munich recording studio ZASTA published the series of sounding books . The share of sales in the book market was still low in the decades that followed.

In 1972 there was the first cooperation with the broadcasters, who were able to provide the audio book and radio play productions with considerable sources of archive recordings. The avant-garde audio book series by Deutsche Grammophon , Luchterhand Verlag and ARD failed due to financial failure, but laid the decisive foundation for the cooperation between record companies, book publishers and broadcasters.

At the end of the 1970s, the audio cassette replaced the speech record as a carrier medium. But even in the 1980s, the market was not yet ready for audio book editions. a. The Rowohlt Verlag series , Literature for Headphones , founded in 1987 , will be discontinued. Although had Erich Schumm the first pure audio book publisher in Germany, today Steinbach talking books founded is, in 1978, but until 1990 it was possible the Goldmann Verlag together with the WDR to publish crime radio plays with a circulation of up to 30,000 copies and the audio book to create the long-awaited breakthrough. In CD sales, additional data carriers with MP3 versions of the audio books are being added to audio CDs in order to facilitate playback on the computer and transfer to portable playback devices.

As a result, more and more small publishers emerged, which could now successfully dedicate themselves to artistic productions. In the mid-1990s, the CD replaced the audio cassette as a sound carrier. In 1993, several well-known fiction publishers merged (including Suhrkamp , Hanser , Rowohlt ) and founded the Hörverlag (DHV) in Munich, which with an annual turnover of 16 million euros (2005), alongside the Berlin Audio Verlag (DAV), is the leading position within the audiobook publishers.

There is a tendency, especially among the large publishers, to understand the audio book as a pure secondary use, in the sense of merchandising . This is justified by the fact that the publishers' advertising budgets are insufficient to advertise a product as an audio book alone. Elaborate productions that go beyond a mere reading are therefore usually only included in the program as a takeover from the broadcasters.

Audiobook authors can also self-publish audio books on request or in small series (less than 10 pieces). These audio books are also available online on all platforms and in traditional bookshops.

The various forms of production of an audio book differ in seven different design elements. These are the language, the text, the integrated sounds, the music, graphics or drawings, images or videos as well as tables and formulas.

When it comes to language, it is important to note whether one or more speakers are involved, the voices , whether male or female speakers, whether lay speakers, trained speakers / moderators or actors, the integration of feelings and emotions as well as the emphasis.

The text is the link between content, listening and understanding of the text. It depends on the type of production whether a cut makes sense or not. A shortening always speaks in favor of short and precise information, learning or teaching. The forms of production that only want to entertain on the basis of a book speak against a reduction. Audiobooks in DAISY format basically offer the possibility of listening to and reading along with the text.

In audio books, noises serve as a carrier of the link. Every hearing person knows, for example, noises from the park, street noise, a cell phone, from an airplane or from opening a door. As a result, the human brain creates links to already known experiences, which can be used very well for an audio book text.

The integration of music in an audio book can, for example, trigger emotions in the listener or contribute to the clear recognition of a new section.

It is possible to describe a large number of graphics or drawings and thus integrate them as text in an audio book. However, some things can only be described in a very complicated way and so the attached booklet is used to display the graphic or drawing. Graphics and drawings can be integrated into an audio book in DAISY format.

However, the DAISY format has one disadvantage. In order to be able to use it on a PC or laptop , special software must be installed.

Audiobooks sold on CD are usually considerably shortened readings of the original work due to the limited storage capacity of the medium. This is only vaguely indicated in the audio books. A first scientific study of the cutting process and its methodology was carried out in 2009. Titles offered for download have fewer capacity restrictions in compressed audio format due to the smaller file size, which is why a larger number of unabridged audiobooks are available on the download market.

After the audio book was the domain of the record trade for a long time, the publishing industry has been able to participate in the distribution of the medium on a large scale since the early 1990s. Various audio book publishers emerged. Many book publishers now value being involved in an audio book series or starting their own production. The Internet has also changed the distribution channels for auditory communication media. Publishers set up portals that allow the desired “books” to be downloaded directly onto the MP3 player . However, the publishers, like the music and film companies, fear the illegal distribution of their works. In 2005 the working groups for audio book publishers and electronic publishing in the Börsenverein des Deutschen Buchhandels founded the AG Piraterie to take action against copyright violators on the Internet.

The projects, which until the beginning of the 1990s were mainly children's and youth literature, serve every genre. In addition to the demanding author reading, an exotic lexicon of superfluous things also has a market. In the USA and Great Britain, battery-powered audio books with a playback function and headphones are now also on the market, with the audio files being copy-protected. Particularly great success is achieved with texts presented by a well-known personality.

In 2013, over 14 million audio books were sold on CD in Germany. Like printed works, audio books are subject to the reduced VAT rate from January 1, 2015 .

The Bitkom association sees downloading as a rapidly growing niche market for audio books. For 2007, for example, 20 percent growth was expected. The download platform audible.de , which was set up at the end of 2004, had tripled its sales from 2005 to 2006, sold the millionth audio book in 2007 and, according to its own statements, offered over 40,000 audio books in 2010, including a number of exclusively sold unabridged versions. At the beginning of 2018, Google entered the business with Google Play .

In addition to audible.de, Google Play Store, iTunes Store and Napster , some smaller platforms also deliver audio books, such as soforthoeren.de with 4000 DRM- free titles (as of June 2008), Vorleser.net with around 550 (as of June 2010) or skyTuner.net (hit-tuner.net) with approx. 600 free audio books (as of May 2014), but these have so far not achieved any market relevance. Direct sales via the publisher's website are also gaining relevance in the download area.

Psychological thrillers and fantasy in particular , as well as non-fiction books, are more in demand - mostly by men - than in stationary retail.

Providers who offer audio books as MP3 files or, alternatively, a corresponding player are particularly user-friendly . The playing time of an audio book is often several hours. Apps specially developed for audiobooks make it possible to resume playback during breaks and interruptions exactly at the position last played.

Blind or visually impaired people are particularly dependent on “spoken books”. Since 1954, audio libraries have made audio books and radio plays available to a closed group of users. The recording of such texts must be artistically adapted to the needs of the blind and also be carried out by qualified speakers and sound engineers. People who are blind to the elderly, who have no longer learned Braille, or those with print disabilities who find it difficult to handle a printed book independently, can be considered as users of these libraries .

Since 1997 hr2 , the cultural program of the Hessischer Rundfunk (hr), has published the audio book best list every month . A jury made up of personalities from cultural life selects those new releases that they consider particularly worth listening to. At the end of the year, this shortlist leads to the announcement of an audio book of the year . Audiobooks for both adults and children are awarded monthly prizes. Similar to comparable “best lists” for printed works, the audio book best list is also intended to give potential buyers of “literature for the ears” a better overview of high-quality productions. Another well-known award is the German Audiobook Prize , which the WDR has awarded since 2003.

The audio book award introduced by the Federal Association of the Music Industry has existed since January 2008 . It is awarded for 100,000 audio books sold.