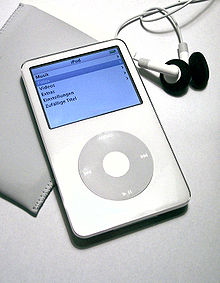 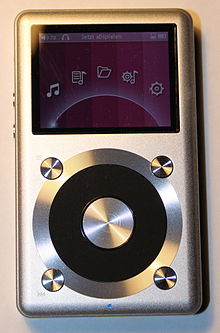 MP3 player or MP3 player mostly describes a portable media player for playing audio files in MP3 format, although many of these products also support other, sometimes more modern, audio formats such as AAC , WMA , FLAC or Ogg Vorbis . At the software level , audio players are sometimes referred to as MP3 players .

The portable CD players and cassette recorders that dominated the 1990s were largely replaced by MP3 players. Nowadays most hi-fi systems , car stereos and cell phones also support MP3 and other audio formats, so that dedicated devices are becoming increasingly less important.

The first portable MP3 player with storage on the multimedia card newly developed by SanDisk and Siemens was built in 1995 as a prototype by Pontis in Schwarzenfeld , the series version of which, MPlayer3 , made its debut on the German market in early 1999.

In 1998 the MPMan F10 was launched as the world's first mass-market MP3 player, a few months before the more popular Rio PMP300 . One month after the Rio was presented, the Recording Industry Association of America sued Diamond Multimedia , the manufacturer , for violating the Audio Home Recording Act . Diamond Multimedia's victory in this lawsuit made it possible for a wider market for MP3 players to emerge.

In September 2000, the first digital camera with a built-in Fujifilm MP3 player came on the market and more and more devices built-in MP3 player functions as one of many functions.

In 2008, the work of the Englishman Kane Kramer became known, who made sketches for a comparable device as early as 1979.

Today almost every smartphone , media player or DVD player can be used as an MP3 player. This is why MP3 players that can only play music are disappearing more and more from households.

MP3 players usually have an output for headphones or earphones to play music. Devices with built-in speakers are also available. The audio files are copied to the player via the USB interface. The USB cable also often functions as a charging cable. Some MP3 players can play files from an inserted memory card . Further interfaces are infrared , Bluetooth or WLAN .

The MP3 files are usually stored either on internal flash memories (capacity up to 64 GB, usually 1 to 16 GB) or hard drives ( e.g. Apple iPod , Archos , Cowon iAudio , Creative Labs , iriver , TEAC or Samsung ; Capacity up to 160 GB). Exchangeable storage media are also used, in particular memory cards (for example SD cards with capacities of 4 to 128 GB). There are also MP3 players that can play files from CDs; this is particularly widespread in car radios.

The files are converted into music by software in digital signal processors (very fast microprocessors with special functions).

The functionality of the player is constantly increasing. Many devices have besides ID3 tag display, a voice recorder, organizer or FM - radio . Almost all of them have an ad. In addition to LCDs, OLED displays are slowly gaining acceptance . In addition to playing music, some devices can also display films, photos and texts and also act as mobile data storage devices to exchange files between individual systems. Also available are MP3 players with a recording function via microphone, analog or digital input. More complex MP3 players such as Apple's iPod often also function as an address book, appointment calendar, notebook, alarm clock and the like. Some devices also offer the option of transferring files from other media or devices to the built-in memory, for example photos via an integrated card reader or, for example with the Cowon iAudio  X5 , files from other devices (digital cameras, external hard drives, other music players ...) via USB. Some, such as the Zen Vision from Creative Labs can make photos even show on a television. And the Internet is slowly beginning to make its way into MP3 players , too, so with some models, additional song data can be called up over the Internet.

MP3 players enable quick access to extensive music files in the smallest of spaces. However, only devices with a suitable display can conveniently document the music files including the cover of the original CD. Small devices with dimensions of less than approx. 4 cm × 3 cm often only offer basic functions, such as start, stop, forward and reverse as well as title jump. Subsequent programming of the track sequence is not possible with such playback devices, but you can put together a playlist beforehand.

According to a study by the European Union, excessive use of MP3 players via headphones at too high a volume threatens hearing damage and even deafness . If they turned their devices on too loud and listened to music on them for more than an hour each day, users risked irreversible hearing loss. This applies to around five to ten percent of the owners of MP3 players and thus to around two to ten million citizens. A limitation of the maximum volume of MP3 players to 100 decibels (≈ 60  sone ) is under discussion.

The World Health Organization WHO and the International Telecommunication Union (ITU) adopted a new standard for personal audio devices such as MP3 players in February 2019. The WHO-ITU standard recommends: Options to limit volume, including automatic volume control and parental volume control. There was a need for action because 1.1 billion “young people at risk” around the world are at risk of hearing loss, the WHO announced. In two years of work, the WHO initiative “Make Listening Safe” developed the protection standard. Governments and manufacturers are advised to adopt the voluntary WHO-ITU standard.