Vorbis ( also known as Ogg Vorbis Listen ? / I in the corresponding container format ) is a (patent) free audio format for lossy audio data reduction . The format was developed by the Xiph.Org Foundation as a patent-free alternative to the widespread MP3 format. The format is said to be customizable enough to still be used in 2025.

Vorbis can be encoded with either a variable or a constant bit rate between (average) 32 and 448 kbit / s. The format is streaming and multi-channel capable . As a broadband process, Vorbis basically supports the mapping of the entire human hearing spectrum with sampling rates of 44.1 kHz and more. Hearing tests gave transparent results from 150 to 170 kbit / s (Vorbis quality level 5). Vorbis is on a similar level to Musepack or the proprietary Advanced Audio Coding .

Vorbis is, like most of its kind, a transform codec based on the modified discrete cosine transform (MDCT). Vorbis data is usually in Ogg - Container files ( file extension .ogg) embedded, which are also developed by the Xiph.Org Foundation. Vorbis data can also be contained in Matroska , OGM or WebM containers (for example as an audio track for a video). The specially developed, comparatively flexible Vorbis comment scheme is used to record metadata .

It supports up to 255 channels. The Vorbis I specification specifies the assignments depending on the number of channels.

Vorbis has now established itself in the IT industry alongside MP3 and AAC . Audio files in Wikipedia and Wikimedia Commons are generally saved in this format. Support is mediocre among mobile music players. The internet radio stations that Vorbis use include Deutschlandradio , Bermuda radio , Radio Darmstadt , Radio Lora Munich , Freie Sender Kombinat and RadioTux . The music streaming service Spotify also uses the combination of Ogg-Vorbis in various average bit rates depending on the player.

The reference implementations are published under a BSD-like license . In addition to these, separate further developments took place in a series of spin-offs, the most important of which were also improved in the official version. 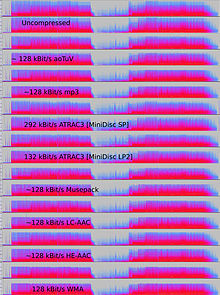 Spectral analysis of a piece of music ( The Power of Thy Sword ) with two channels, each plotted against time. Comparison of the original with the results of the encoding in different lossy audio formats (including aoTuV). The original shows signals up to about 21 kHz, while after lossy coding the bandwidth is more or less reduced. However, this does not say much about the sound quality, as the lower frequencies are more important for the sound impression. If the circumcision is too severe, however, the highs may be audibly missing. ( MiniDisc frequency spectra from analog recording.)

aoTuV ( Aoyumi's Tuned Vorbis ) is a Vorbis encoder with the aim of further improving the sound quality. This is especially true for low bit rates (below 64 kb / s) - so far more of a weak point for Vorbis. The aoTuV code is based on the code from Xiph.Org and generates files that correspond to the Vorbis specifications. Since Vorbis v1.1, aoTuV Beta-2 has been an official part of the Vorbis encoder from Xiph.Org. With the Beta-3 version , 2 new quality levels (32 kb / s and 48 kb / s) were introduced in order to allow even stronger compression. The current version is Beta 6.03 (May 25, 2011) with further improved sound. The sound at higher bit rates has also been improved. In listening tests in which Vorbis is compared with other formats, the aoTuV encoder is often used, as it allows a better result to be expected.

With the help of assembler, the Lancer project develops processor-specific versions of an encoder that are optimized for speed. Mainly through the use of the faster floating point instruction set extensions such as SSE that are present in many modern main processors , a doubling of the performance with the same quality is often achieved.

Software for playing Vorbis audio data is available for all modern operating systems. It is included in most Linux distributions from the outset, and popular multimedia players under Windows such as AIMP , foobar2000 , Media Player Classic - Home Cinema , MPlayer , VLC media player or Winamp also come with Vorbis support. Since the Vorbis decoder Tremor , which places much lower demands on processors, is available in a similar way to the original Vorbis implementation, there is also software for some portable media players.

Compared to MP3 and AAC, Vorbis decoding is computationally simpler, but it requires more memory, as there is no static probability model and Huffman tables and data for the vector quantizer are supplied in the data stream itself. This data is only a few kilobytes in compressed form, but must be decompressed and stored in memory.

Some hardware manufacturers now support the Vorbis format as standard (e.g. Blackberry , Cowon , iriver , Samsung , TrekStor or SanDisk Sansa), others only after a firmware update. For some hardware, such as B. Apple's iPod has alternative third-party firmware that Vorbis supports. The " Rockbox " project provides firmware with a Vorbis decoder that is under GPL. There are various homebrew programs for the PlayStation Portable and the Nintendo DS that also offer Vorbis support, but require modified firmware.

In the meantime, Vorbis support is also implemented directly in the hardware of signal processors, parallel to MP3 decoding, so that more and more players should be able to use the alternative format in the future.

Comparison with MP3 and AAC

In autumn 1998 the Fraunhofer-Gesellschaft informed various audio codec developers that the distribution or sale of MP3 audio codec software was protected by license and that a license fee had to be paid for it. This announcement mainly affected many free software projects, most of which stopped their development (see also LAME ).

Christopher Montgomery then began to develop the free audio codec Vorbis , which is not subject to licenses or patents . The name "Vorbis" comes from the character "Exquisitor Vorbis" from Terry Pratchett's Discworld novel Simply divine .

The project went public for the first time in April 2000 and presented the audio codec , which was then still subject to the LGPL . In March 2001, the codec's license was changed to a BSD-like license to make the codec easier to use on commercial products.

Version 1.0 was published in July 2002. This made the first version of Vorbis available to end users. Shortly afterwards, Real Networks announced that it would support Vorbis in their Helix project . In September 2002, the previously not freely available decoder Tremor , which is tailored for use on special hardware, was also offered free of charge under a BSD-like license.

In 2003, hardware manufacturers began shipping portable music devices with Vorbis support. For example, iriver published a firmware update for the iHP-100 in October and released the successor with the appropriate firmware.

In August 2004, Real Networks followed a promise to support Vorbis in the Helix project and released versions of the Helix and RealPlayer that Vorbis could play.

In 2005 Microsoft released a license for the then new DRM system Janus , in which hardware manufacturers were prohibited from supporting alternative audio formats such as Vorbis. However, this condition was contradicted in October 2005 by judge Colleen Kollar-Kotelly.

In 2005, as part of the Ghost project, Xiph.Org worked for the first time on plans and drafts for a Vorbis successor (initially in conversation as Vorbis II). In addition to the codec plans of Christopher Montgomery, which are on hold in favor of the further development of Theora, this also resulted in the particularly low-latency real-time codec CELT by Jean-Marc Valin .