The Fraunhofer Society for the Promotion of Applied Research e. V. (Fraunhofer) with around 28,000 employees is the largest organization for applied research and development services in Europe. It represents an important part of the German research landscape, which includes universities (especially universities ), the Max Planck Society , the Helmholtz Association of German Research Centers , the Gottfried Wilhelm Leibniz Science Association and the German Research Foundation . The seat is in Munich .

It is named after Joseph von Fraunhofer (1787–1826). Its outstanding achievement consisted in the combination of precise scientific work and its practical application for new, innovative products. Joseph von Fraunhofer was equally successful as a researcher, inventor and entrepreneur and was therefore chosen as the model and namesake of the association.

The purpose of the association is to carry out application-oriented research for the direct benefit of companies and for the benefit of society. The Fraunhofer-Gesellschaft currently operates more than 80 research facilities, including 74 institutes, at over 40 locations throughout Germany. Around 28,000 employees, most of them qualified in natural sciences or engineering, work on an annual research budget of 2.8 billion euros. Of this, just under 2.3 billion euros are attributable to contract research. The Fraunhofer-Gesellschaft generates over 70% of this service area with orders from industry and publicly funded research projects. The rest is contributed by the federal and state governments, also to give the institutes the opportunity to prepare solutions to problems that will become topical for business and society in five or ten years (preliminary research). Members of the Fraunhofer Society , which is recognized as a non-profit organization, are well-known companies and private sponsors. Around 3 percent of the Fraunhofer-Gesellschaft's financial volume goes to the departmental research area for the Federal Ministry of Defense . 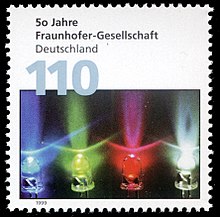 50 years of the Fraunhofer-Gesellschaft: German special postage stamp from 1999

The company receives around 30 percent of its expenses from the federal government (90 percent) and the federal states (10 percent) as institutional funding to carry out preliminary research. Planning security through continuous budget increases is given with the Pact for Research and Innovation . It has to cover the remaining 70 percent of the expenditures with its own income, whereby this includes contracts from industry as well as publicly funded research projects (federal, state, EU). This is where the so-called Fraunhofer model comes into play: Since 1973, the amount of basic funding has been largely performance-related based on the amount of business income. This principle applies to society as a whole as well as to the individual institutes. This implements the political will to make the Fraunhofer-Gesellschaft the leading provider of applied research . At the same time, society and its institutes are given the flexibility to react autonomously to changing framework conditions in science and on the markets.

The institutes are not legally independent units. In fact, the Fraunhofer model still grants the institutes a very high degree of independence from the Munich headquarters. The institutes and their directors are independently responsible for project results, for their own importance in the scientific world and, above all, for their own financing . On the one hand, this results in a high degree of independence in setting technical priorities, in the distribution of resources , in project acquisition and in project management , on the other hand, there is also a certain economic pressure and an obligation to focus on customers and the market. In this sense, the institutes and their employees act entrepreneurially and ideally combine research, innovation and entrepreneurship in such a way that the orientation towards the patron saint Joseph von Fraunhofer is fulfilled.

Numerous innovations in products and processes can be traced back to research and development work in Fraunhofer institutes. To this end, the institutes work on practically all application-relevant technology fields, such as B. in microelectronics, information and communication technology, life sciences, materials research, energy technology or medical technology. One of the best-known Fraunhofer developments is the MP3 audio data compression method . In 2011 the Fraunhofer-Gesellschaft reported 673 new inventions. This corresponds to about three inventions per working day. Of these, 494 developments have been registered for patent. The number of active property rights and property right registrations increased to 6131.

It was founded in Munich on March 26, 1949 by representatives from industry and science, the state of Bavaria and the newly emerging Federal Republic. There were 103 members that day.

In 1952, the Federal Ministry of Economics and the Stifterverband declared the society to be the third pillar in the non-university German research landscape, alongside the German Research Foundation and the Max Planck Society . The aim of the Fraunhofer-Gesellschaft to support applied research with its own facilities, however, remained controversial for a long time.

In 1965, the Science Council recommended the general expansion of non-university research institutions and, in particular, of the Fraunhofer Society as the supporting organization for applied research. In 1968 the Fraunhofer-Gesellschaft came under public criticism for the military research it carried out.

In 1973 the “Fraunhofer model” was adopted by the federal cabinet and the federal-state commission . In the same year, the board of directors and the central administration moved into a joint building at Leonrodstrasse 54 in Munich. The Fraunhofer program for the promotion of contract research for small and medium-sized companies started and gained more and more importance in the following years. In 1977 the Ministry of Research and Defense shared political responsibility for the FhG. In the area of ​​civil research, the federal and state governments divided funding in a ratio of 9 to 1.

In 1984 the Fraunhofer-Gesellschaft had 3500 employees in 33 institutes with a research volume of 360 million marks. In 1988, the share of defense research in the Fraunhofer-Gesellschaft's total expenditure was only 10 percent. In 1989 the FhG had almost 6,400 employees in 37 institutes with a total volume of 700 million marks a year.

In 1991, after German reunification, numerous research institutions from the former GDR were integrated into the Fraunhofer-Gesellschaft as temporary institutions or as branches of existing institutes.

In 1993 the company exceeded a total financial volume of one billion marks. The "Leitbild 2000" presented by it defines the company as a market and customer-oriented, nationally and internationally active supporting organization for institutes of applied research.

From 2000 to 2001, on the initiative of the Federal Ministry of Education and Research, the GMD-Forschungszentrum Informationstechnik GmbH and the Fraunhofer-Gesellschaft merged.

In 2000, the Fraunhofer Institute for Integrated Circuits IIS achieved a particular success: MP3 , the method used worldwide for encoding and compressing music data, rose to become the most widely used codec for audio files and made Fraunhofer known worldwide outside of the research area.

After a two-year pilot phase, the Fraunhofer Venture Group was established in 2001 as an independent department at the headquarters of the Fraunhofer Society in Munich. She is responsible for the spin-off and participation program there.

In 2002 the Heinrich Hertz Institute for Communication Technology Berlin GmbH was formed from the Gottfried Wilhelm Leibniz Science Association. V. transferred to the Fraunhofer Society. With this integration, the Fraunhofer-Gesellschaft exceeded the 1 billion euro mark for the first time.

In 2003 the association moved into its own high-rise in the Sendling-Westpark district of Munich. The basic corporate goals are summarized in a »mission«; the desired corporate culture is described in the »values ​​and guidelines« . This is intended to give employees a better opportunity to identify with the company and to unleash their own creative potential.

In 2008 a further subsidiary in Europe was founded with Fraunhofer Austria Research GmbH; The seat is in Vienna . Fraunhofer Austria comprises two business areas: Production and logistics management in cooperation with the Vienna University of Technology and Visual Computing in cooperation with the Graz University of Technology .

In 2011, the cooperation with selected high-tech universities of applied sciences began with the “Fraunhofer Application Center” model. The first institution of this kind in Germany is Fraunhofer IOSB-INA in cooperation with the Institute for Industrial Information Technology at the Technical University of Ostwestfalen-Lippe in Lemgo , North Rhine-Westphalia .

In 2012, cooperation with universities of applied sciences was further expanded. Two new Fraunhofer application centers were created in the summer. The Fraunhofer application center for wood fiber research HOFZET was founded in the summer through a cooperation between the Braunschweig Fraunhofer Institute for Wood Research (WKI) and the Hanover University of Applied Sciences (formerly Hanover University of Applied Sciences). At the same time, the Fraunhofer Institute for Layer and Surface Technology, also located in Braunschweig, and the HAWK Göttingen founded the application center for plasma and photonics.

The society consists of more than 80 research institutions, including 74 institutes.