This article deals with the German authority, for others see Ministry of Defense . 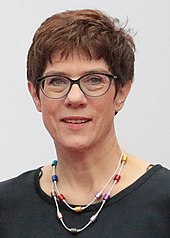 The Federal Ministry of Defense ( BMVg , until 1972 BMVtg ) is a supreme federal authority in the Federal Republic of Germany .

The Federal Ministry is the specialist department within the Federal Government for military defense and all matters relating to the Federal Armed Forces . It is the highest military command authority for the armed forces and the highest service authority for the Bundeswehr administration . The Ministry of Defense has been headed by Annegret Kramp-Karrenbauer since July 2019 . In addition to political responsibility, it has command and control over the armed forces in peacetime. She is the highest superior of all soldiers in her division and their highest disciplinary superior .

See also : History of the Bundeswehr

As early as 1950, the then Federal Chancellor , Konrad Adenauer , transferred the management of planning for a defense contribution from the Federal Republic of Germany to Theodor Blank . In December 1950, about 20 employees began intensive preparatory work in Blank's office called “The Federal Chancellor's Commissioner for Questions relating to the Increase in Allied Troops”. By June 1955, this so-called Amt Blank had grown to over 1,300 employees. It was renamed the Federal Ministry of Defense on June 7, 1955 and the name was adopted in the Basic Law , which was changed shortly thereafter . On December 30, 1961, the name (but not in the Basic Law) - as one of the classic departments such as foreign affairs, finance, interior affairs and justice - was changed to the Federal Ministry of Defense .

First office of the BMVg on the Hardthöhe in Bonn , in the foreground the "pyramid" ( canteen ) 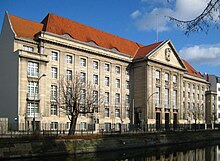 Second office in the Bendlerblock Berlin

The first office of the ministry is on Hardthöhe in Bonn , a second office since 1993 in the Bendlerblock in Berlin . Around 2500 employees work at both offices. When it was founded, the ministry was housed in the Ermekeil barracks in Bonn . The move to Hardthöhe started in 1960.

Motor vehicle stand of the Federal Minister of Defense

Association badge for army uniform wearers in the BMVg

The BMVg is the highest federal authority and highest command authority of the armed forces . At the top is the minister, two parliamentary state secretaries , two permanent state secretaries , the inspector general of the Bundeswehr and the management department. The two parliamentary state secretaries, Peter Tauber (CDU, since 2018) and Thomas Silberhorn (CSU, since 2018), represent the minister in the political-parliamentary area. The two permanent state secretaries, Gerd Hoofe (since 2013) and Benedikt Zimmer (since 2018), support them in the technical management of the ministry and in exercising command and control. The Inspector General, Eberhard Zorn , advises the Minister on military matters. He is the highest-ranking soldier and responsible for the overall design of the armed forces. The ministry is divided into ten departments.

The management team, the press and information staff as well as the "Organization and Revision staff" (Org / Rev) form the management area. The management staff organizes the minister's daily work. He prepares meetings and appointments and coordinates cooperation with the government and parliament. It includes the minister's office, her adjutantage , the “Parliament and Cabinet Department ” and the protocol . The press and information staff coordinates the ministry's media work. He informs the press and the public about the Bundeswehr and Germany's defense and security policy. The head of the staff is also the spokesman for the Ministry of Defense. The Organization and Audit staff supports the management in shaping the Bundeswehr. As the central point of contact, it brings together all organizational and structural matters at the military and civilian levels.

The BMVg is divided into ten departments:

The staff element "Equal Opportunities, Diversity and Inclusion" with the contact point "Discrimination and Violence in the Bundeswehr" is part of the Personnel Department and is aimed at "all active and former, civil and military Bundeswehr members who experience bullying, discrimination, physical or emotional violence within the Bundeswehr experienced or have experienced. This also applies in connection with discrimination based on sexual orientation or identity ”.

The following organizational areas exist in the subordinate division of the Federal Armed Forces:

Six departments are directly subordinate to the General Inspector :

The budget of the Federal Ministry of Defense and the Bundeswehr as a subordinate area result from section 14 of the respective Federal Budget Act . According to Art. 87a, Paragraph 1 of the Basic Law , the "numerical strength [of the armed forces] and the main features of their organization [...] must be derived from the budget" .

Procurement orders from the Defense Ministry with a value of more than 25 million euros must be approved separately by the budget committee before the contract is concluded , in addition to the budget estimate and approval and advice in the Defense Committee of the Bundestag . This so-called “25 million euro bill”, formerly the “50 million DM bill”, was introduced by the Budget Committee in 1981 by means of a decision of principle.

Compared to 2017, the defense budget has increased by 4.1 percent.

In the 2018 federal budget, the distribution of the 2,726.5 positions is planned as follows:

Compared to 2016, the defense budget has increased by 7.9 percent.

In the 2017 federal budget, the distribution of the 2,355.5 positions is planned as follows:

Compared to 2015, the defense budget has increased by 4 percent.

In the 2016 federal budget, the distribution of the 2,400 positions is planned as follows:

Compared to 2014, the defense budget has increased by 1.6 percent.

According to Article 65a, Paragraph 1 of the Basic Law , the Federal Minister of Defense has authority over the armed forces of the Federal Republic of Germany. He is at the head of the ministry and, in accordance with the departmental principle ( Art. 65, sentence 2 GG ), runs his business area independently and on his own responsibility and thus has the authority to issue instructions to all members of the Bundeswehr, including civilian employees.

If the federal territory under attack by armed force or such an event is imminent, can Bundestag and Bundesrat the defense case gem. Art. 115a GG determine, whereby the command and command according to. Art. 115b GG passes to the Federal Chancellor .

With Annegret Kramp-Karrenbauer , since July 17, 2019, after Ursula von der Leyen, a woman has headed the ministry for the second time.

Military service of the Federal Defense Ministers and State Secretaries

Hans Apel was the first Federal Minister of Defense who had not done military service and, like his successors in office Manfred Wörner and Rupert Scholz , belonged to the so-called white classes who did not have to do basic military service. Manfred Wörner was up to the rank of military exercises while Colonel of the Reserve of the Air Force transported.

Volker Rühe and Peter Struck were postponed from military service due to their studies, and after that they were no longer called in due to their age.

Helmut Schmidt was the first Federal Minister of Defense to do military service as part of a military exercise in the Bundeswehr. Even Rudolf Scharping , Franz Josef Jung , Karl-Theodor zu Guttenberg and Thomas de Maiziere rendered military service.

On May 5, 2017, the negative Big Brother Award in the authorities category was given to the German Armed Forces and the Federal Minister of Defense as their Commander-in-Chief “for the massive digital armament of the German Armed Forces with the new ' Cyber ​​and Information Room Command ' (KdoCIR) ". In his laudation, Rolf Gössner ( International League for Human Rights ) explained the jury's criticism.