Georg Leber was born in 1920 as the son of the bricklayer Jakob Leber and the housewife Elisabeth. Geis in the Steinbacher Straße No. 126 in the Hessian community Obertiefenbach, which at that time belonged to the Oberlahnkreis , was born and grew up there. Today the place is part of the municipality Beselich and belongs to the merged district Limburg-Weilburg .

Leber attended elementary school from 1927 to 1935 in Obertiefenbach and belonged to the Catholic denomination. He completed a commercial apprenticeship and then an apprenticeship as a bricklayer . During the Second World War he was a radio operator in the Air Force from 1939 to 1945 , most recently as a non-commissioned officer .

After 1945 he worked in the construction industry and in 1947 joined IG Bau-Steine-Erden . In 1949 he became the full-time trade union secretary of IG Bau-Steine-Erden in Limburg an der Lahn , and three years later editor of the union newspaper Der Grundstein . In July 1952 he was appointed to the main board of this construction union and was vice chairman from 1955 to 1957 and finally from October 1957 to 1966 its national chairman. He was also a member of the federal board of the German Federation of Trade Unions and the Executive Board of the International Federation of Construction and Woodworkers and President of the joint committee of the trade unions in the construction and wood industry in the European Economic Community .

Within the trade union spectrum, Leber was the protagonist of the right wing against the “left” Otto Brenner from IG Metall . His trade union renounced demands for socialization early on, founded a system of social security funds with the employers and developed the project for “wealth creation in employee hands”.

In 1984 he was an arbitrator in the metal industry's labor dispute over the 35-hour week . The compromise named after him provided for a flexible reduction in weekly working hours to an average of 38.5 hours.

Georg Leber joined the SPD in 1951. Within the party he belonged to the right wing, the so-called canal workers .

Georg Leber promoted the hiring of Günter Guillaume , who was later exposed as a spy , which led to the resignation of the then Federal Chancellor Willy Brandt after the Guillaume affair .

Liver was from 1957 to 1983 member of the German Bundestag , where he temporarily the constituency Frankfurt I took. From 1961 to 1966 he was a member of the SPD parliamentary group executive committee. After Hermann Schmitt-Vockenhausen's death , Leber was elected as his successor to the Bundestag Vice-President on September 12, 1979 . He held this office until he left Parliament in 1983. From February 27, 1958 to February 25, 1959, he was also a member of the European Parliament .

Georg Leber took over the office of Federal Minister of Transport in the Kiesinger cabinet on December 1, 1966 . During this time, the “ Leber Plan ”, which is known colloquially after him, was created , which provided for the transfer of the transport of bulk goods from the road to the railroad. This met with stubborn resistance from members of the CDU / CSU and the FDP, so that the plan could not actually be implemented due to the numerous exceptions. He was able to enforce both a speed limit of 100 km / h for roads outside the local area and a limitation of the permitted blood alcohol content to 0.8 per mille for motorists.

In 1966, Leber said, "No German should live more than 20 kilometers from a motorway entrance".

In the EEC Council of Ministers he advocated a limitation of driving times to 50 hours a week and 9 hours a day. There was widespread opposition to his plan to limit truck traffic to highways. On trucks, posters against Leber and his transport policy were raised, and his own party brought out pro-Leber stickers.

He retained the post of Minister of Transport even after formation of the social-liberal coalition under Willy Brandt in October 1969. In the cabinet Brandt he headed in personal union and the Federal Ministry of Posts and Telecommunications . On July 7, 1972, he handed both ministries over to Lauritz Lauritzen and succeeded Helmut Schmidt as Federal Minister of Defense .

On September 11, 1972, Leber was faced with the difficult decision of giving the order to kill an unidentified aircraft that was approaching Munich. It was here in the Olympic Stadium watching the closing ceremony of the Olympic Games take place, and a few days earlier there had been a terrorist attack on Israeli athletes. Leber waited to see what turned out to be correct, since it was not a terrorist hijacked plane, but a Finnish airliner with over 100 passengers and whose transponder had failed.

In July 1973, after the Defense Committee had passed a resolution, Leber gave the order to set up the Bundeswehr universities in Hamburg and Munich, which began teaching in October 1973. This was the first time that a scientific degree was possible and compulsory as part of officer training.

On November 29, 1973, he announced the new defense structure of the Bundeswehr in a government statement before the German Bundestag . As part of the restructuring, among other things, the army was enlarged by three brigades . In 1975, during Leber's tenure, women were appointed medical officers for the first time. In October 1976 he retired the two Luftwaffe generals Karl-Heinz Franke and Walter Krupinski because, contrary to express instructions , they had invited the right-wing extremist pilot Hans-Ulrich Rudel to a traditional meeting and did so by comparing Rudel's Nazi past with the KPD. Past of Social Democrat Herbert Wehner had apologized. An application by the CDU / CSU parliamentary group to disapprove of Lebers’s decision was rejected on February 3, 1977 by the SPD / FDP majority in the German Bundestag with 243 to 220 votes.

Georg Leber resigned against the will of Federal Chancellor Helmut Schmidt on February 1, 1978 and thus assumed political responsibility for the use of eavesdropping by the Military Counter- Intelligence Service , which, without Lebers knowledge, had wiretapped his secretary Hildegard Holz in her apartment from June 1974 because she was spying for the Ministry of State Security was suspected. However, this later turned out to be wrong. The minister found out about the illegal wiretapping at the beginning of 1978 , but only informed the Bundestag of this after the Quick magazine published an article on January 25, 1978 . Georg Leber also kept silent about the illegal wiretapping of the Communist League West Germany party , which, according to his own account, he only found out afterwards because he believed it was legitimate. Only a legal investigation ordered by him showed the opposite. Lebers successor as Minister of Defense was Hans Apel .

Leber was regarded as a very popular defense minister among the members of the German armed forces and was referred to by them as the father of a soldier . His term of office was marked by a strong armament push by the Bundeswehr; Among other things, the final expansion of 36 brigades of the field army was realized and the anti-tank missile system MILAN was introduced in sufficient numbers for the infantry .

In 1965, Leber was instrumental in founding the Bank for Savings and Wealth Creation .

From 1981 to 1997, Leber was chairman of the board of directors of the International Federation (then honorary chairman), an independent provider of youth, social and educational work.

From 1990 to 1993 Leber was a member of the advisory board of the non-profit Bertelsmann Foundation . 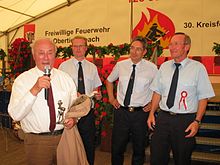 Georg Leber at the 125th anniversary of the volunteer fire department in his hometown Beselich-Obertiefenbach in July 2005 with Franz-Josef Very (r.)

In 1943 Leber married Erna-Maria Wilfing (died 1984). His son Manfred comes from this marriage. In 1985 he married Katja Vojta; he last lived in Schönau am Königssee in Berchtesgadener Land .

On June 17, 2013, the industrial union building, agricultural and environmental protection awarded the Georg Leber Prize for the first time. With the award on behalf of Georg Leber, she honors people who have shown outstanding moral courage. Wolfgang Thierse was the first to receive the award.

The community Beselich was unanimously agreed by the municipal council on 23 February 2015 in accordance with the consent of the district committee of the district Limburg because castle the gym Obertiefenbach on 12 December 2015, the name "Georg-Leber-Hall" and paid tribute to allow the merits of the late honorary citizen of their community .

The seminar and day center of the International Federation (IB) in Kelkheim (Taunus) is called "Georg-Leber-Haus".

On the 60th anniversary of the Bundeswehr sports school in Warendorf on July 6, 2017, the property, the cornerstone of which he laid as Defense Minister at the time, was named Georg-Leber-Kaserne .

"In the knowledge of our shared responsibility for our compatriots, let us trust with clarity and patient persistence, not complaining and not stooping, with our heads held high in peace with our neighbors, that one day we Germans will grow unity from a new freedom."

“Learn what you need for your life! Do not walk stooped and bent, walk upright like free! Walk with your head held high, but never rise above others! Go with an alert mind and with a hot heart! Walk happier than the ancients could go through their lives, because you are freer than everyone who has lived on our soil before you ever was! "

- Georg Leber : 1993 in a speech on the occasion of the 20th anniversary of the Bundeswehr universities

Defense Ministers of the Federal Republic of Germany

Chairwoman of the IG Bau-Steine-Erden