This article does not deal with the German politician Dieter Haak , also an SPD. 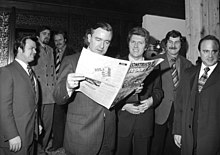 Dieter Haack at the Constructa building fair in 1978

From 1978 to 1982 he was Federal Minister for Regional Planning, Building and Urban Development .

After graduating from high school in 1953, Haack, who is Protestant, studied law in Erlangen and Bonn , which he completed in 1957 with the first state examination and in 1962 the second state examination . In Erlangen he became a member of the Bubenreuther fraternity (today part of the New German Burschenschaft ). In 1961 he received his doctorate as Dr. jur. with the work The committee of confidence in the electoral law of the Evangelical Lutheran Church in Bavaria . He then joined the Bavarian civil service at the Ebersberg District Office as a government assessor and in 1963 moved to the Federal Ministry for All-German Issues . Here he worked until 1969, most recently as government director and head of Herbert Wehner's ministerial office.

From 1988 until its dissolution in 1992, Haack was President of the Board of Trustees of Indivisible Germany . He was also president of the regional synod of the Evangelical Lutheran Church in Bavaria from 1990 to 2002 and chairman of the vhw, the federal association for home ownership, housing construction and urban development, from 1994 to 2003.

Haack was awarded the Federal Cross of Merit with Star of the Federal Republic of Germany in 1990. Haack has been an honorary citizen of the city of Erlangen since 2004. In addition, for many years he was in charge of the “Bubenreuther Colloquium” organized by the Bubenreuth fraternity of Erlangen, of which he is a member.

Dieter Haack is married and has four children.

In 1969, Haack was elected to the German Bundestag as a constituency member for the Erlangen constituency, of which he was a member until 1990. Here he was a member of the executive committee of the SPD parliamentary group in 1972 and from 1982 to 1990 . After Haack was able to win the Erlangen constituency again in 1972, he was elected to the German Bundestag via the Bavarian state list in the subsequent elections.

From 1990 to 1999 he was a member of the Bavarian Senate for the Protestant Church .