From 1975 to 1992 and 1998 to 2013, Müntefering was a member of the German Bundestag (MdB). From 1998 to 1999 he was Federal Minister for Transport, Building and Housing in the first Schröder cabinet . From 2005 to 2007 he was Vice Chancellor and Federal Minister for Labor and Social Affairs in Merkel's first cabinet .

Müntefering's father was a farmer, his mother a housewife. He did not get to know his father until he was six and a half years old, when he returned from captivity . The parents both died in 1985.

After attending elementary school in Sundern Müntefering graduated from 1954 to 1957 trained as an industrial clerk , then he worked until 1975 in the metalworking industry and in 1967 a member of the trade union IG Metall . In 1961/1962 he did his basic military service with the Panzer Grenadier Troops in Höxter and Osterode am Harz . 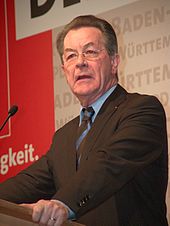 Vice Chancellor Müntefering at the " Political Ash Wednesday " on March 1, 2006 in Neckarsulm 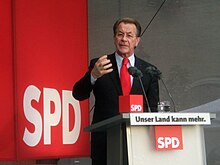 In October 2005, Müntefering proposed the former SPD federal manager Kajo Wasserhövel as future general secretary. However, when Andrea Nahles , who belonged to the left wing, prevailed on October 31, 2005 within the party executive committee , Müntefering announced that he would no longer run for chairmanship. At the federal party conference in Karlsruhe on November 15, 2005, Matthias Platzeck was elected his successor with 99.4% of the valid delegate votes.

In August 2008, one month after the death of his wife, whom he had cared for to the end, Müntefering returned to top politics to support the SPD in the run-up to the upcoming state and federal elections. After Kurt Beck's resignation on September 7, 2008, he was elected as his successor with 84.86 percent at a special party conference in Berlin on October 18, 2008.

After the SPD had only received 23 percent of the vote in the federal election on September 27, 2009 , Müntefering announced that he would no longer stand as a candidate at the SPD party congress from November 13 to 15, 2009 in Dresden. He was replaced as chairman on November 13, 2009 by Sigmar Gabriel .

From 1996 to 1998 he was a member of the state parliament of North Rhine-Westphalia.

Müntefering was then again a member of the German Bundestag from 1998 to 2013 , when he no longer ran for election. From September 2002 to November 2005 he was chairman of the SPD parliamentary group .

From December 18, 1992 to November 27, 1995 he was a member of the cabinet of Prime Minister Johannes Rau as Minister for Labor, Health and Social Affairs of the State of North Rhine-Westphalia .

After the federal election in 1998 , he was appointed Federal Minister for Transport, Building and Housing on October 27, 1998 in the Federal Government led by Federal Chancellor Gerhard Schröder . After Ottmar Schreiner's resignation on September 5, 1999 from the office of federal manager of the SPD, Müntefering resigned from his ministerial office on September 29, 1999 and became provisional federal manager.

On November 22, 2005, he was appointed Deputy Chancellor and Federal Minister for Labor and Social Affairs in the German government led by Angela Merkel . On November 13, 2007, Müntefering announced his resignation from his offices as minister and vice-chancellor for family reasons. This took effect on November 21, 2007.

Franz Müntefering has been honorary president of the Arbeiter-Samariter-Bund Germany since April 27, 2013 . He was also in November 2013 next to de Maiziere Lothar Chief Executive Officer of Deutsche Gesellschaft e. V. elected. On November 25, 2015, the BAGSO - Federal Working Group of Senior Citizens' Organizations - elected him chairman. Since March 2014 he has been Chairman of the Advisory Board of the Berlin Demography Forum .

Müntefering is married for the third time. His two daughters, including the writer Mirjam Müntefering, come from his first divorced marriage with his wife Renate . In 1995 he married Ankepetra Rettich (1946–2008). Her cancer , which she succumbed to on July 31, 2008 in Bonn , was the reason for Müntefering's resignation as Federal Minister and Vice Chancellor in autumn 2007. He actually did not want to run in the 2009 Bundestag elections , but in September 2008 he let Frank-Walter Steinmeier stand (at that time designated SPD candidate for chancellor ) change his mind.

On December 12, 2009, he married the 40 years younger journalist Michelle Schumann , who has also been a member of the Bundestag since 2013 and has been Minister of State in the Foreign Office since March 2018 . Franz Müntefering is a Roman Catholic .

Liberalization of the financial markets

In April 2005, Müntefering criticized the investment behavior of investment companies and hedge funds ; until then, such criticism had only been expressed by globalization critics . He compared them to grasshoppers and thus sparked the grasshopper debate in politics and the media.

On February 25, 2009, at the Political Ash Wednesday of the Baden-Württemberg SPD in Ludwigsburg , Müntefering spoke out in relation to countries with a lower tax rate than in Germany: “In the past, soldiers would have been sent there. But that is no longer possible today. ”The Luxembourg Prime Minister Jean-Claude Juncker was outraged, and his statement also met with a negative response in the Swiss parliament .

Vice Chancellor of the Federal Republic of Germany

Labor and Social Affairs Minister of the Federal Republic of Germany

Federal Managing Director of the SPD

Health Minister of the State of North Rhine-Westphalia