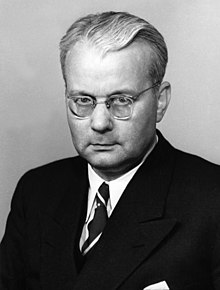 From 1949 to 1953 he was Federal Minister for Marshall Plan Affairs . He kept this office under the changed name of Federal Minister for Economic Cooperation until 1957. During his entire ministerial work he was also Vice Chancellor of the Federal Republic of Germany .

Blücher, who was of the Roman Catholic faith , passed his Abitur in 1914 at what would later become the Burggymnasium in Essen . From 1914 to 1918 he was a soldier a. a. in the function of a regimental adjutant . Most recently he had the rank of lieutenant in the reserve. After the First World War he was a French prisoner of war until 1920 . He began studying history and political science, but broke it off due to financial hardship. He completed a commercial apprenticeship at the Allgemeine Bauverein Essen . From 1921 he was authorized representative there. From 1922 to 1926 he worked in industry. From 1926 to 1935 he held a leading position at the GAGFAH housing company in Essen, most recently as managing director and from 1935 to 1938 he was head of Hochtief's asset management in Essen. From 1938 to 1943 he was authorized signatory of the JH Vogeler banking house in Düsseldorf and from 1943 to 1946 director of the National Bank in Essen.

In the Weimar Republic , Blücher did not belong to any party and stayed away from the NSDAP during the National Socialist era . After the Second World War he was one of the co-founders of the Liberal Democratic Party in Essen with Hans Wolfgang Rubin and Hans-Wilhelm Beutler , which later became the FDP district association there. When the Liberal Party for the British Zone of Occupation was founded in Opladen on January 7, 1946 , he suggested the name Free Democratic Party , which finally prevailed. On May 18, 1946, he was elected in Bad Pyrmont to succeed Wilhelm Heiles as chairman of the FDP in the British zone of occupation. From 1948 to 1949 he was Deputy Federal Chairman and from 1949 to 1954 Federal Chairman of the FDP. In the wing dispute between the supporters of the National Collection around August-Martin Euler , Friedrich Middelhauve and Artur Stegner on the one hand and the determined liberals (the self-name of the left wing in the Bundestag faction) around Otto Bezold , Willy Max Rademacher and Reinhold Maier on the other On the side he was rather indifferent and tried to mediate between the party wings. From 1947 to 1956 he was also President of the German group of the “Liberal World Union” (today: Liberal International ).

In February 1956 Blücher resigned from the FDP in protest against the behavior of his North Rhine-Westphalian party friends (coalition change from the CDU to the SPD ) and was one of the co-founders of the FVP , which joined the German party after just over a year .

Documents on Blücher's work for the FDP are in the archive of liberalism of the Friedrich Naumann Foundation for Freedom in Gummersbach .

1946/47 Blücher was a member of the state parliament of North Rhine-Westphalia and the zone advisory board for the British zone of occupation. As a representative of the state of North Rhine-Westphalia, he was a member of the Economic Council of the Bizone in Frankfurt am Main from 1947 to 1949 , where he was parliamentary group chairman of the FDP parliamentary group and headed the economic committee. After his election to the Economic Council, he resigned from his Landtag mandate on July 14, 1947.

From 1949 until his resignation on February 28, 1958, Blücher was a member of the German Bundestag . On February 23, 1956, he left the FDP parliamentary group together with the so-called Euler Group . After a short time as a non-attached member of parliament , he joined the “Democratic Working Group” formed by the Euler Group on March 15, 1956, from which the Free People's Party (FVP) parliamentary group emerged on June 26, 1956 . From March 14, 1957 he was a member of the DP / FVP parliamentary group formed by a merger with the DP parliamentary group. He entered the third German Bundestag in 1957 through an electoral agreement with the CDU, which did not set up its own applicant, as a directly elected DP candidate from the Göttingen – Münden constituency ; previously he was always elected to the Bundestag via the state list of North Rhine-Westphalia .

From September 10, 1946 to June 17, 1947, Blücher was Finance Minister of the State of North Rhine-Westphalia in the state government headed by Prime Minister Rudolf Amelunxen .

After the federal election in 1949 , he was appointed Federal Minister for Marshall Plan Affairs on September 20, 1949, in the federal government led by Chancellor Konrad Adenauer . At the same time he was appointed Deputy Chancellor . From 1949 to 1951 he represented the Federal Republic in the International Ruhr Authority . On June 2, 1953, he was the official representative of the Federal Republic of Germany at the coronation of Elizabeth II in London. After the Bundestag election in 1953 , he became Federal Minister for Economic Cooperation on October 20, 1953 and again Deputy Chancellor. Although the name of his ministry had changed, the scope of duties remained almost the same and was mainly limited to Europe . The then Federal Ministry for Economic Cooperation can therefore only be compared to a limited extent with today 's Federal Ministry of the same name , which is mainly focused on development aid. From 1955 to 1957 he was Deputy President of the Council of Ministers of the OEEC (today: OECD ). After the federal election, he left the federal government on October 29, 1957.

From January 1958 until his death he was a member of the High Authority of the Coal and Steel Community , where he worked for the coal mining industry was responsible and related antitrust issues.

Vice Chancellor of the Federal Republic of Germany

Treasury Minister of the Federal Republic of Germany

Finance Minister of the State of North Rhine-Westphalia