The 1957 Bundestag election for the 3rd German Bundestag took place on September 15, 1957. The Union parties received an absolute majority with 269 of the 497 Bundestag seats (plus 8 and 22 Berlin members who were not entitled to vote ); Konrad Adenauer was re-elected Chancellor on October 22, 1957 .

In the 1957 Bundestag elections, it was possible for the first time in the Federal Republic of Germany to vote by post , which around five percent of those eligible to vote did. 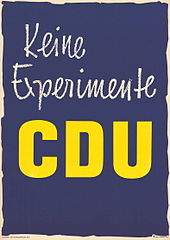 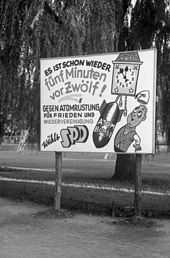 Election poster of the SPD

The election campaign was very polarized. Federal Chancellor Konrad Adenauer said at the CDU party conference in July 1957 that a victory for the SPD would mean the end of Germany. The SPD, which had joined the campaign Fight against Nuclear Death , claimed that there was a clerical-fascist danger, a new militarist nationalism in the ranks of the CDU / CSU. According to Joseph Rovan , the often hateful attacks concealed the fact that a broad consensus had gradually developed between the two camps in the Federal Republic . Many voters saw no reason to change government, either because of it or not . With the accession of the Saarland to the Federal Republic on January 1, 1957, Adenauer had a great success to show in a matter which the SPD had used as an argument against Adenauer's foreign policy. Adenauer's 1957 pension reform was also popular .

The elections were their biggest election victory to date for the Union parties: For the first and so far only time a party or party alliance received absolute majorities of the mandates and even of the votes in a federal election .

The CDU chairman and federal chancellor Konrad Adenauer ran for the third time as the CDU / CSU candidate for chancellor (election slogan: “ No experiments ” ), and for the SPD the party and parliamentary group chairman Erich Ollenhauer (1901–1963) for the second time . The CDU increased by five percentage points compared to 1953, the SPD by three (28.8% → 31.8%). The SPD result was received as a defeat.

The DP received 3.5% of the vote. In its favor, the CDU had refrained from listing direct candidates in some constituencies ( piggyback procedure ) and the DP had received six direct mandates . Due to the basic mandate clause , the DP moved into the Bundestag despite failing to meet the five percent hurdle . On the other hand, the Bavarian Party and the German Center Party failed to move in, although they had joined forces with the German-Hanoverian Party to form the Federal Union in order to jump the five percent hurdle and the SPD had refrained from direct candidates in four constituencies.

For the first time, the KPD did not run for election; it was banned in August 1956 .

In the 1957 Bundestag elections, it was possible to vote by post for the first time .

For the first and so far only time, the two Union parties competed against each other in one federal state: In Saarland , which joined the Federal Republic on January 1, 1957, the Christian People's Party of Saarland (CVP) had joined the CSU and entered under the name CSU / CVP against the CDU Saar .

The CSU associations in Bavaria and Saarland (CSU / CVP) were linked to one another on lists. 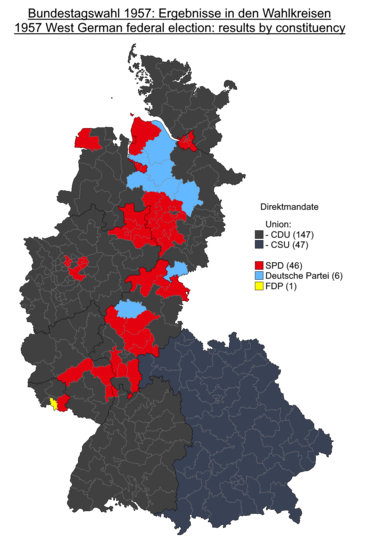 The SPD and FDP formed the opposition. Erich Ollenhauer remained party and group chairman of the SPD, but declined in the federal election in 1961 on a new chancellor candidacy .

With 50.2% of the vote, the Union parties achieved the best result in the history of the Federal Republic of Germany and are the only alliance to date to have an absolute majority , but still formed a coalition with the DP ( oversized coalition ). With the resignation of the two DP ministers on July 1, 1960 and joining the CDU on September 20, 1960, the coalition was effectively ended.