from Wikipedia, the free encyclopedia
This is the sighted version , which was flagged on April 21, 2021 . There is 1 pending change that has yet to be viewed.

Logo of the CDU

Logo of the CSU

The two parties are legally, financially, organizationally and programmatically completely separate. The CSU does not participate in elections outside of Bavaria, the CDU is not active in Bavaria. Nevertheless, there are joint (nationwide) organizations, such as the Junge Union . 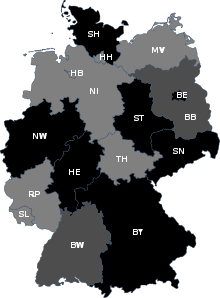 Countries where the Union parties in the state parliament are

Programmatic differences between the CDU and CSU lie mainly in the fact that the CSU is more conservative in domestic, legal and social policy and more social in economic and social policy.

What separates and what in common

Even at the federal level, the parties as such are organizationally separated from one another: The federal CDU party only exists with reference to the 15 states. As a result, the CDU only submits state lists in the 15 states in Bundestag and European elections, the CSU only in Bavaria.

It looks more differentiated with the implementation of the election campaign at the federal level. The CDU and CSU always announce a joint leading candidate (for the Bundestag: Chancellor candidates). Most of the time, but not always, there was also a joint election manifesto for both parties. The CSU can emphasize its independence through its own election program, especially if there are personal or programmatic differences of opinion with the CDU. The CSU is also free to choose whether to invite CDU candidates to Bavarian election events or to show CDU faces on their CSU posters.

In organs at the federal level or at the European level, the parties always appear together. In the Bundestag CDU and CSU together form a parliamentary group, in the European Parliament together a CDU / CSU regional group. CDU and CSU negotiate coalitions together and participate in federal governments: if there are CDU ministers, there are also CSU ministers.

The Union and Franz Josef Strauss

The bond between the CDU and the CSU was by no means always firm: At the time of the CSU party chairman Franz Josef Strauss , the Kreuther decision to split the CSU came in 1976 to dissolve the joint parliamentary group in the 8th Bundestag that had existed since 1949 . The aim of the CSU was to get more speaking time in parliament .

In previous years, “CSU groups of friends” had already formed in the German states outside Bavaria . to the Action Group Fourth Party (AVP). Support for the AVP was given up again by the CSU at the insistence of the CDU. The AVP withdrew its candidacy three weeks before the 1976 federal election . After the election, Strauss threatened to found a " fourth party " again, motivated by the poor performance of the CDU and a result of 60% for the CSU in Bavaria . But he dropped this thought after the CDU threatened to appear in Bavaria.

In mid-1979, the election of a candidate for chancellor for the 1980 Bundestag elections became the next ordeal for the Union. Strauss made himself a candidate in May, while the CDU named Ernst Albrecht as a candidate a little later . A vote on July 2, 1979 gave Strauss a narrow majority; he had once again threatened the “Fourth Party”.

In his “ Brandrede von Sonthofen”, Strauss warned the Federal Republic of a major crisis. He criticized the social-liberal coalition and especially the FDP . Against the background of the German Autumn , he also warned the issue of terrorism . The counteraction of the “left” was called Stop Strauss and was a popular motif for badges back then, also in Bavaria.

The 1980 election was lost for the Union parties; many voters switched to the FDP. For Strauss this meant the end of his national political ambitions. For the opposition leader of the CDU Helmut Kohl , on the other hand, this was the chance to establish his own national policy. He brought the Union closer to the FDP and finally came in 1982, after the FDP left the coalition with the SPD, by a vote of no confidence in the office of Chancellor .

After the 2013 federal election, which resulted in the previous coalition partner FDP leaving the German Bundestag and in which the Union parties only narrowly missed an absolute majority, they now had another option in addition to a new edition of the grand coalition with the black-green coalition , to rule. In December 2013, however, after long negotiations, the grand coalition was reissued.