This article concerns the Prime Minister of Lower Saxony. For other people with this name, see Ernst Albrecht (disambiguation) . 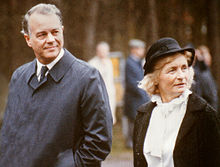 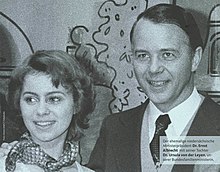 Albrecht was born in Heidelberg as the son of the internist Carl Albrecht . He was a great-great-grandson of the Bremen merchant Baron Ludwig Knoop . A little later his father settled in Bremen , where Albrecht attended school. In February 1948 he passed the Abitur examination. From 1946 to 1948 he led a group of the German Youth Union . Albrecht later studied philosophy and theology in Tübingen , at Cornell University ( USA ) and in Basel (with Karl Jaspers ). In 1953 he completed his subsequent study of law and economics in Tübingen and Bonn as economist from. In 1959 he did his doctorate on the subject of liability relationships in the coal and steel community .

In 1954 he became an attaché to the Council of Ministers of the Coal and Steel Community , 1958 head of cabinet of the member of the EEC commission Hans von der Groeben , 1969 general director for competition of the EC . From 1971 to 1976 he was - in addition to his state parliament mandate - one of five deputy managing directors of the biscuit manufacturer Bahlsen . This activity earned him the nicknames "cookie uncle" and "cookie monster" among political opponents.

Albrecht lived on the family estate in Burgdorf- Beinhorn . In 1953 he married the Germanist Heidi Adele Stromeyer (1928–2002). The couple had seven children, including the CDU politician Ursula von der Leyen . His sons are called Harald, Hans-Holger , Barthold and Donatus. Hans-Holger Albrecht was President and CEO of Millicom International Cellular (MIC). Daughter Benita-Eva died of cancer in 1971 at the age of eleven and son Lorenz in 2005 at the age of 49. Ernst Albrecht's brother is the conductor George Alexander Albrecht .

In May 2008 Ursula von der Leyen publicly announced that her father had Alzheimer's disease; the disease was diagnosed in 2003. From 2007 onwards, the von der Leyen family of nine lived on Albrecht's estate and helped to take care of it. Albrecht died on December 13, 2014 in Burgdorf-Beinhorn.

Albrecht was a member of the Lower Saxony state parliament from 1970 to 1990 . From 1971 to 1974 he held the office of deputy chairman of the CDU parliamentary group.

After the state elections in 1974, a social-liberal coalition governed the 8th Lower Saxony state parliament with a majority of one vote (78 seats for the SPD and FDP, 77 for the opposition CDU). After Prime Minister Alfred Kubel (SPD) resigned for reasons of age, the previous Finance Minister Helmut Kasimier (SPD) was to be elected as the new Prime Minister. Albrecht also stood for election. On January 14, 1976, Helmut Kasimier received only 75 votes from the ranks of the social-liberal government alliance, while Ernst Albrecht won 77 members of parliament on his side. Since the vote did not result in the absolute majority required for any candidate, the election was repeated one day later. This time Albrecht got one more vote, while only 74 parliamentarians voted for Kasimier. The dissenters were presumably opponents of the district reform planned by the social-liberal government . The political scientist Ernst-August Roloff suspected that the decisive vote for Albrecht's majority came from the FDP member Gustav Ernst , who defended himself in court against this accusation.

Since Albrecht did not present a government cabinet within the following 21 days that would have required confirmation by the state parliament in an open vote, another ballot took place on February 6, 1976. In this case, Federal Building Minister Karl Ravens stood against Albrecht on the part of the SPD - after Kasimier's withdrawal . However, he was apparently able to attract another defector to his side and increased his majority to 79 votes. Since he was unable to win either the SPD or the FDP as a coalition partner, he appointed a minority government made up only of CDU members ( Albrecht I cabinet ), which no longer required confirmation by the state parliament. Albrecht was Lower Saxony's first CDU Prime Minister.

The change of government also had an impact on the federal level: The social-liberal coalition of Federal Chancellor Helmut Schmidt lost its majority in the Bundesrat, which was particularly explosive with regard to the ratification of the so-called Poland Treaties, which the Union parties rejected. Albrecht then worked with the Saarland Prime Minister Franz-Josef Röder (who also did not have a majority in his country, but was dependent on tolerance by the FDP) for a compromise: The relocation of Germans from Poland to the Federal Republic was made easier, and they voted in favor also the Union-led countries in the Federal Council for the treaties.

In January 1977 the FDP entered into a coalition with the CDU, which gave the new government a majority in the state parliament. The Albrecht II cabinet comprised two FDP and six CDU ministers. As Prime Minister Albrecht made the decision in 1977 to build a "nuclear center" in the sparsely populated district of Lüchow-Dannenberg in the immediate vicinity of the inner-German border . In addition to an interim storage facility for nuclear waste near Gorleben , this was originally intended to include the central German nuclear waste repository , a new nuclear power plant on the Elbe near Langendorf and a reprocessing plant for uranium fuel rods in Dragahn . The decision in favor of the geologically moderately suitable Gorleben salt dome was solely due to political calculations, as critics have long suspected. They also assume that Albrecht hoped for fewer protests from the population by choosing the sparsely populated Wendland . In 2013, the investigation committee of the German Bundestag came to the conclusion that the site was chosen by Albrecht because of its proximity to the border and as a reaction to the neighboring Morsleben repository for radioactive waste in the GDR .

Albrecht led the CDU four times as the top candidate in the state elections: in 1978 and 1982 Albrecht prevailed against Karl Ravens and twice achieved an absolute majority.

In 1978 Albrecht's government was responsible for the bogus bombing attack on the high-security prison in Celle, known as Celler Loch , to smuggle V-persons into the left-wing terrorist scene around the Red Army faction . During his tenure, he campaigned for Lower Saxony to be the first federal state to accept 1000 Vietnamese refugees ( boat people ) in 1979 .

In the 1986 state elections Albrecht was challenged for the first time by Gerhard Schröder . The CDU lost its absolute majority, but was able to form a narrow majority with the FDP. In December 1988, a constructive vote of no confidence against Albrecht by the SPD parliamentary group because of the casino affair failed with 76 votes to 79 in the Lower Saxony state parliament . At least one member of the opposition parties SPD and Greens must have voted for Albrecht.

On September 2, 1989, the CDU parliamentary group in Lower Saxony separated from Member of Parliament Kurt Vajen after several scandals , which resulted in the loss of the parliamentary majority in the state parliament. The SPD politician Oswald Hoch , who had recently moved up , announced his resignation from the SPD parliamentary group and, as a non-attached MP Albrecht, from then on secured a majority of 78 votes (CDU / FDP) to 77 votes (SPD / Greens) until the end of the legislative period June 1990.

In the state election on May 13, 1990 , there were only relatively minor changes in percentage terms; nevertheless, a red-green majority or coalition was now possible. The SPD challenger, later Chancellor Gerhard Schröder , formed a red-green government ; so Albrecht was no longer Prime Minister after 14 years.

Ernst Albrecht's term of office at 14 years was the longest of all Lower Saxony Prime Ministers to date. His shaping of politics and the brands he has set have had a lasting impact on the country in both a positive and a negative sense. Some voices say that he gave the "artificial structure of Lower Saxony" until then its own identity. He pushed the founding of research institutes in Hanover, Braunschweig, Clausthal and Göttingen. On the other hand, the social conflicts that Albrecht initiated in Wendland four decades ago have been a burden on state and federal politics to the present day. Albrecht was very critical of the increasingly established professional parliamentarians.

Albrecht at the CDU federal party conference in 1989

1983 Albrecht rejected the request of former CDU leader Helmut Kohl from, 1984 to run for President.

After leaving the government office, Albrecht was chairman of the supervisory board of EHW Thale AG (emerged from VEB Eisen- und Hüttenwerke Thale; today Thaletec GmbH). Since the Treuhandanstalt could not find an investor for the company, Albrecht bought the company on January 1, 1993 with the Bremen businessman Hans Henry Lamotte for the symbolic price of one D-Mark, with Albrecht 95 and Lamotte holding 5 percent of the company shares. The state of Saxony-Anhalt took over the complete remediation of contaminated sites and guaranteed 80 percent of the company's old debts. The in-house children's and recreation center Güntersberge , which was originally to be removed from the sales package and transferred to the state of Saxony-Anhalt, was "accidentally" transferred to the investors, according to the Parliamentary State Secretary Joachim Grünewald (CDU). They were then not ready to leave this to the state free of charge, but instead asked for a price of 5.5 million DM (while the market value was estimated at 4.4 million DM). The terms on which the Treuhand finally bought back the recreation center were kept secret. In April 1997 Albrecht sold the company - again for one mark - to the Schunk Group .

In 2007 he was also a member of the supervisory board of the construction company GP Papenburg AG (see Günter Papenburg ) .

Minister of Justice of Lower Saxony