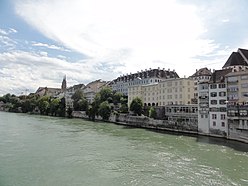 Main building of the old University of Basel ( Rheinsprung ) after the renovation in 1860, which with its arcades in the central building takes up the design language of the first Italian university in Bologna 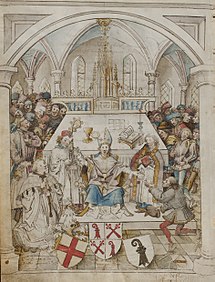 Picture of the founding ceremony on April 4, 1460 in Basel Minster . Bishop Johann von Venningen appoints the provost Georg von Andlau as the first rector and gives the deed of foundation to Mayor Hans von Flachslanden .

The University of Basel was founded in 1460, making it the oldest university in Switzerland .

It is considered to be one of the birthplaces of European humanism , partly because of the intellectual legacy of Erasmus von Rotterdam, who worked here . In the 19th century, alongside the art historian Jacob Burckhardt, one of the most famous people who taught at the university was the German philosopher and poet Friedrich Nietzsche (professor of Greek language and literature ). To date, a total of nine Nobel Prize winners and two Swiss Federal Presidents have studied or taught at the university .

The associated University Library of Basel is one of the most important libraries in Switzerland. The university facilities, which are divided into seven faculties, are spread across the entire city center. The Kollegienhaus from 1939, built according to the forms and lines of the New Building , with several lecture halls and an auditorium with space for 500 people as well as work and administration offices is located on the south side of St. Peter's Square .

A council university already existed during the Basel Council (1431–1449). The deed of foundation for a permanent university in the form of a papal bull from Pope Pius II dates from November 12, 1459, the foundation ceremony took place on April 4, 1460. The university started operations the following day. The first rector was the cathedral provost Georg von Andlau, appointed by Prince-Bishop Johann von Venningen . Originally, the University of Basel had four faculties  - that of the artists, one medical, one theological and one legal. The artist faculty ( artes liberales ) served as the basis for the three other subjects until 1818. Originally, all of the university's lecture halls were located in buildings on the Rheinsprung.

Because of the radiance of the bishop and the various orders, Basel has long been a center of attraction and transit point for clerics , monks and intellectuals and thus a place for intellectual (theological, philosophical and legal) debate and not least because of this (not only because of its geographical location the language border and in the center of Europe and easy accessibility) as the venue for the Basel Council . This had a decisive and lasting impact on the city, so that the University of Basel was founded by Pope Pius II , who had previously worked as a cleric writer at the council. Thus, the intellectual exchange could be institutionalized and continued even after the Council. Immediately in the first hundred years, the university experienced a major boom, as great scholars came to the city immediately, which made Basel a center of early book printing and humanism (especially through the cleric and Augustinian canon Erasmus of Rotterdam). The University Library of Basel was first mentioned in 1471. The library, which today is one of the largest libraries in Switzerland with over three million books and writings, was quite insignificant in its early days. It was only through the incorporation of book stocks from the monasteries that were dissolved and nationalized by the Reformation of 1529 in the first half of the 16th century and the rise of humanistic printing in Basel that it gained enormously in size and importance. With the growing importance of the natural sciences , several new subjects were created in the second half of the 19th century. The first female student at the university was the physician Emilie Frey , who matriculated in 1890 .

After the National Socialists came to power in Germany in 1933, numerous renowned German academics emigrated to Basel due to the political situation, and some Swiss academics also returned. These include the names of the law professor Arthur Baumgarten (1933), the theologians Karl Barth (1935) and Fritz Lieb (1937), the biochemist and philosopher Jeschajahu Leibowitz (1934) and, after the end of World War II, the philosopher and psychiatrist Karl Jaspers from the University of Heidelberg (1948) and the surgeon Rudolf Nissen (1952).

In 1937, the natural sciences were officially combined in the Faculty of Philosophy and Natural Sciences. The world-famous Biozentrum of the University of Basel was added in 1971. The amalgamation of the economic subjects led to the formation of the Economic Science Center (WWZ) in 1988 . In 2003 the Faculty of Psychology was founded. 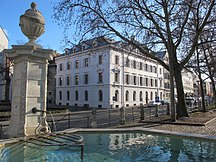 Musicology seminar at the University of Basel at Petersgraben 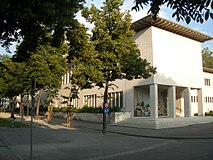 Kollegienhaus of the University of Basel on Petersplatz from 1939, which takes up the design language of the New Building

The university falls under the jurisdiction of the cantons of Basel-Stadt and Basel-Landschaft . Since January 1, 1996, the canton of Basel-Landschaft has contractually stipulated a much greater participation. This had become necessary because in the 1980s and 1990s there was a shift in the origin of students from the urban to the rural canton. On March 11, 2007, almost 85 percent of the voters in Basel agreed to a joint sponsorship with retroactive effect from January 1, 2007. The Basel University is the first university to be financed and run jointly and on an equal footing by two half-cantons.

With the entry into force of the new University Act in 1996, the university was given the right to self-administration. The highest decision-making and supervisory body of the University of Basel is the University Council , whose voting members are elected by both Basel half-cantons (“both Basel”).

The university is a member of the European Confederation of Upper Rhine Universities (EUCOR) .

The university in numbers

At the beginning of the autumn semester 2019, around 9,900 Bachelor and Master students and around 2,900 doctoral students were enrolled at the University of Basel. According to the 2019 annual report, the proportion of women was 56 percent. If you also include students in university training, students in exchange programs and listeners, the University of Basel had around 12,800 students in the autumn semester of 2019, 24 percent of them from abroad. The university has the highest proportion of doctoral students (a total of 22 percent of all students) among the Swiss comprehensive universities. The state-sponsored university has an annual budget of 776 million Swiss francs.

Today the University of Basel is divided into seven faculties:

According to the “Strategy 2014” presented at the end of 2012, which applies to the performance periods 2014–2017 and 2018–2021, the University of Basel focuses in research and teaching on six thematic priorities, namely life sciences, image sciences, nanosciences, sustainability and energy research, European and Global Studies and Narrativity. Medical research is carried out in collaboration with the University Hospital Basel . Various National Research Centers (NCCR) are located at the University of Basel : QSIT (since 2010), Molecular Systems Engineering (2014) and the NCCR AntiResist and SPIN, both of which will start in 2020. The NCCR Nanosciences (2001–2013) was transferred to the Swiss Nanoscience Institute; the NCCR Bildkritik (2005–2017) ended properly; the NFS Sesam was discontinued in 2009.

From 1959 to 2013, the Department of Physics operated the AGN-211-P reactor, a functional research reactor. The Department of Pharmaceutical Sciences of the Faculty of Philosophy and Natural Sciences is responsible for the Museum of Pharmacy and History (since 1925). The medical faculty, whose anatomical instruction began in the 15th century, is responsible for the anatomical museum (since 1824). The social sciences course created in 2005 by the Faculty of Philosophy and History has not been offered since 2013.

The university is considered to be one of the leading universities in Switzerland in the national context and has a large number of politicians, scientists, thinkers and cultural workers as lecturers and alumni:

The University of Basel also works closely with the Biosystems Department of ETH Zurich in Basel.

The façade of the “Old University” according to the renovation plans from 1860 by the architect Johann Jakob Stehlin the Elder. J. in the neo-renaissance style

The Kollegienhaus on Petersplatz, which opened in 1939, houses numerous lecture halls and the large auditorium of the university. There is also a cafeteria, the university social counseling, the university sports office and the place for the registration of new students. The building was designed by Roland Rohn , a student of Otto R. Salvisberg , and for the most part takes up the design language of New Building . The works of artists such as Alexander Zschokke , Walter Eglin , Jakob Probst , Coghuf , Karl Glatt and Fritz Bürgin can be seen there.

The Biozentrum and the Pharmazentrum are located on Klingelbergstrasse. These buildings are interconnected and contain lecture halls, internship rooms and computer rooms, which are mainly used by students of biology, pharmacy and computer science. Otherwise, university pharmacy and molecular biology research is located there. On the neighboring “Schällemätteli”, a new center for biological research is being built on the site of the former prison. The new main building, the Biozentrum Tower , has been under construction since 2013 with a 73-meter high-rise building .

The Bernoullianum - located directly at the university library and named after the Bernoulli family of mathematicians - is a listed building and was built in 1872 as the first university building to be used for natural science. As a former institute for physics, chemistry and astronomy, it housed the Basel observatory until 1928 , as the dome on its roof shows.

On the Nadelberg there are several seminars, including those for English linguistics and literary studies, in late medieval buildings. The most recent buildings at the university are those of the Faculty of Economics and Law in the Jacob Burckhardt building in the immediate vicinity of the Basel SBB train station .