The University of Lucerne is one with 3,028 students and 73 professors of the smallest of Switzerland . Its roots go back a long way; there have been courses in philosophy and theology in Lucerne since around 1600 . In addition to the theological faculty and the cultural and social science faculty (formerly the humanities faculty), there has also been a law faculty since 2001 . In the autumn semester of 2016, a fourth, business and economics faculty began operations. The Department of Health Sciences and Medicine started its work in August 2019.

After the Catholic elite lost the University of Basel as an educational institution with the Reformation , the Jesuit College of Lucerne was founded in 1574 at the suggestion of Karl Borromeo . When the University of Freiburg was founded in 1889, Lucerne's chances of having its own university decreased. Around 1920 the project of a nationwide Catholic university with faculties in Freiburg and Lucerne was pursued, but without success. The project of a non-denominational university also failed in a referendum in 1978. From 1973 the Federal Council recognized the theological faculty as a university. The Philosophical Institute, which was added in 1985, was promoted to the Faculty of Humanities in 1993 with the Chair of History created in 1989. In 2000, the new university law was approved by the Lucerne electorate . When the law came into force on October 1, 2000, the previous university became a university. In 2001 the law faculty was founded. In 2005 it was recognized throughout Switzerland by the Federal Council. 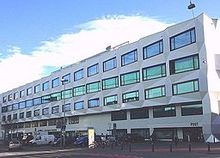 The Lucerne university building that was moved into in 2011

In spring 2006, the electorate of the city of Lucerne approved a rezoning of the property and a site contribution of eight million Swiss francs. In November 2006, the population of the canton approved the conversion loan of around 140 million Swiss francs. Around a third of this amount went to the Canton of Lucerne. The renovation work began in 2007 and was completed in 2011. In September, the university and the Central Switzerland University of Education moved from their locations across the city to the converted post office building at Lucerne train station , which was no longer needed due to the relocation of the letter post center to Härkingen . Since September 2011, all faculties and institutes have been located at one central location at Frohburgstrasse 3, the previous post office building. In 2014, cooling was installed after the first few years of use had shown that the temperatures in the lecture halls, seminar rooms and reading room were too high in summer when fully occupied.

On November 30, 2014, the voters of the Canton of Lucerne approved the revision of the University Act in a referendum vote. The revised law provides for the creation of an economics faculty. The financing of the construction during the first four years of operation is to be secured by third-party funds from companies, foundations and private individuals. At the beginning of the autumn semester of 2016, the faculty began studying with around 200 students.

The Department of Health Sciences and Medicine started on August 1, 2019. This is directly subordinate to the rector and consists of the three departments health sciences and health policy, medicine and rehabilitation.

The university consists of four faculties, to which numerous institutes, seminars and research centers are assigned.

The theological faculty is considered to be the oldest Catholic theological teaching and research institution in Switzerland.

Faculty of Culture and Social Sciences

Faculty of Business and Economics

The Faculty of Business and Economics has seven professorships.

Department of Health Sciences and Medicine

All courses are two-tiered. After six semesters, the students graduate with a bachelor's degree . After a further three to four semesters, they acquire a master’s degree . The study achievements are measured with credit points .

At the Theological Faculty, Catholic theology can be studied as a Bachelor (since 2013 also in distance learning) and Master. At the master’s level, there are also three options for specializing: Religious Studies (with a teaching diploma in Religious Studies for Matura schools), Liturgical Music and Religion-Economy-Politics. The Religious Education Institute offers a bachelor's degree in religious education as well as a diploma course in religious education.

Faculty of Culture and Social Sciences

The Faculty of Culture and Social Sciences offers the following subjects at Bachelor's and Master's level:

The following integrated courses of study can also be attended at the Faculty of Culture and Social Sciences:

The transdisciplinary joint degree Master in Religion - Economics - Politics is offered by the KSF and the TF together with the Universities of Basel and Zurich .

The Faculty of Law offers bachelor's and master's degrees in law .

Faculty of Business and Economics

The Faculty of Business and Economics offers the following subjects at Bachelor's and / or Master’s level:

Department of Health Sciences and Medicine

A total of 3,028 students were enrolled at the university in the autumn semester of 2019, 1,587 of them on the bachelor's level, 997 on the master's level and 384 on the doctoral level. Divided into faculties, the Faculty of Law had 1276 students, followed by the Faculty of Culture and Social Sciences with 789, the Faculty of Economics with 378 students and the Faculty of Theology with 296 students. There were 135 students in the Department of Health Sciences and Medicine and 154 students in inter-faculty courses. In addition, 447 people are taking a postgraduate degree.

At the end of 2019, the number of employees totaled 576 permanent employees. Of these, 73 were professorships (28% women). 398 people were employed in the academic mid-level and 224 in the administrative area (number of contracts in each case).