The University of Zurich ( UZH for short ) is a university in Zurich , in Switzerland . With over 25,000 students, it is currently the largest of all twelve Swiss universities . It was founded in 1833 and to date has been associated with a total of thirteen Nobel Prize winners .

As a full university , it unites all classical faculties under one roof: theology (ThF), law (RWF), economics (WWF), medicine (MeF), veterinary medicine (VSF), philosophy (PhF; the philosophy faculty is with around 47 percent of all students the largest faculty) and Mathematics - Natural Sciences (MNF).

The main building of the university, completed in 1914, is located at the foot of the Zürichberg , right next to the headquarters of the ETH Zurich . 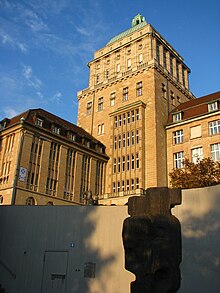 Main building of the University of Zurich

University tower (back left); right in front of it the dome of the ETH

Kollegienhaus with a view of the city 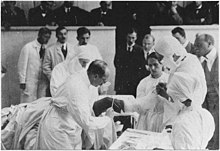 Ferdinand Sauerbruch operating in the lecture hall, around 1915

Campus of the University of Zurich-Irchel 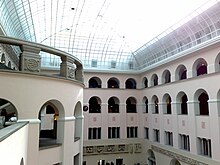 In addition to its own facilities, the University of Zurich also offers access to the archives, libraries and institutes of the ETH Zurich as well as private institutions. In addition, a number of museums and collections within the city of Zurich, from anthropology to zoology, are affiliated with the university, including the ethnological museum .

The University of Zurich is known for research successes in molecular biology , brain research and anthropology , for the activities of the Psychiatric University Clinic Zurich , the university and animal hospital, and for its efforts to improve the quality of teaching - for example through the use of e-learning . to continuously improve.

The university is part of the League of European Research Universities (LERU) and the International Lake Constance University .

In 1832 the government council of the canton of Zurich decided to found a university in Zurich. The founding ceremony was on April 29, 1833. The already existing high schools for theology (since 1525), law and medicine were combined with a newly founded philosophy faculty to form the Universitas Turicensis . It was the first university in Europe to be founded by a democratic state and not by the church or a sovereign. It was founded almost four hundred years after the first university in Switzerland in Basel (1460), which in turn was brought into being by a papal bull before the Reformation .

The seal of the university shows the Grossmünster with Charlemagne and thus refers to the oldest secondary school in Zurich, the Collegium Carolinum .

The first seat of the university was in 1835 in the converted "rear office" of the former Augustinian monastery . In the first semester, 161 students were enrolled (16 theology, 26 law, 98 medicine and 21 philosophy), who were taught by 26 professors and 29 private lecturers. The first women were admitted to the Philosophical Faculty as early as 1840. The University of Zurich thus took on a pioneering role in terms of women's studies in the German-speaking area . In 1859 the Philosophical Faculty was split into two departments, one with a philosophical, linguistic and historical orientation (phil. I) and one with a mathematical and natural science department (phil. II).

In 1864 the university moved to the south wing of the newly built polytechnic due to lack of space . In 1867, Nadezhda Suslowa (1843–1918) became the first woman in the German-speaking world to receive a doctorate from the medical faculty of the University of Zurich; Marie Heim-Vögtlin (1845–1916) was the first Swiss woman to study medicine at the University of Zurich, who completed her doctorate in 1874 and founded the first Swiss women's hospital in 1889 with the affiliated “Pflägi” (1901).

In 1883, fifty years after it was founded, 91 lecturers (37 of them full professors) looked after 463 students. In 1901 the veterinary faculty was founded. Together with that of the University of Bern , it is considered the oldest veterinary medical faculty in the world.

From 1909 Albert Einstein worked for two years as a lecturer in theoretical physics at the University of Zurich.

In 1914 the university moved into its new main building on Rämistrasse . In 1908, voters in the city and canton of Zurich approved the new building and the necessary credit in a referendum. In 1917 the Zurich Central Library was opened, which is also the city, canton and university library .

In 1933, a hundred years after it was founded, the University of Zurich had 2,033 students.

In 1946, Winston Churchill gave his famous speech to the world's academic youth in the auditorium of the University of Zurich. The speech culminated in the well-known appeal to Europe: "Therefore I say to you: let Europe arise!" 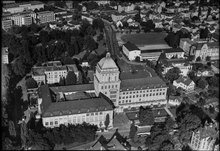 Since the 1950s, the number of students has increased dramatically and space has become increasingly scarce. In 1962, the science faculty proposed moving part of the university to the north of the city. In 1973, construction work began on the University of Zurich-Irchel, which was inaugurated in 1979 (see also: Irchelpark ).

In 1983, one hundred and fifty years after it was founded, the University of Zurich had 15,000 students. In 1984 the university management was expanded by upgrading the rectorate to a main office and creating two vice-rectorships. In 1992 the law and political science faculties were split up into a law and an economics faculty.

In 2016, a medical chair dedicated entirely to breast milk research was created at the University of Zurich. It is the first of its kind in the world.

In 1998, the electorate in the Canton of Zurich approved the new University Act. The University of Zurich was thus granted the status of an independent legal personality. Since then, it has been able to dispose of its own financial resources and organize itself independently within a global budget .

2004 by the architect was Santiago Calatrava planned library of the Law Institute opened.

In 2008 the university celebrated its 175th anniversary.

At the beginning of 2011, the economic faculty was reorganized. The former eight institutes have been merged into four new institutes (the name of the institute director in brackets): Business Administration (Dieter Pfaff), Economics ( Ernst Fehr ), Banking and Finance ( Thorsten Hens ) and Computer Science (Martin Glinz).

Since autumn 2012, there have been public disputes in connection with the dismissal of the curator of the Medical History Museum Christoph Mörgeli in the Mörgeli case , with another dismissal at the end of October 2013. On October 29, 2013, the dismissal of Iris Ritzmann , the deputy director of the Medical History Institute at the University of Zurich, became known. As a result of this criticism, Andreas Fischer announced his immediate resignation as rector of the university on November 6, 2013. The molecular biologist Michael Hengartner was elected as his successor in June 2013 . He took up his post early on February 1, 2014, and in the meantime, Vice-Rector Otfried Jarren was in charge of the university on an interim basis.

After the university put a filter into operation in February 2014 that was supposed to make access to pornographic Internet content more difficult, the Chaos Computer Club Zurich openly criticized the University of Zurich for the first time for its practice of network censorship and accused it of "inability to deal with cyberspace" before. As a result, the university largely withdrew the measure and set up a working group.

Ranking of the Faculty of Business and Economics

The Economics Faculty of the University of Zurich was rated the best in the German-speaking area by the Handelsblatt in 2009 . The business administration faculty achieved fourth place in the German-speaking area. In a European comparison, the economics faculty ranks third in terms of research output behind the London School of Economics and University College London. The declared aim is to join the top international group.

The university has a number of Nobel Prize winners who have received their doctorates or taught here: