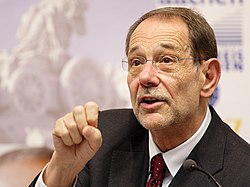 Javier Solana was born in Madrid on July 14, 1942. His father, a son of the educator and author Ezequiel Solana Ramirez , was chemistry professor Luis Solana San Martín, who died in 1962 . His mother Obdulia Madariaga Pérez, who died in 2005, was a daughter of the economist Rogelio de Madariaga y Castro. His great-uncle was the Spanish diplomat and writer Salvador de Madariaga .

Javier Solana has two older siblings, Luís and Isabel, and two younger siblings, Ignacio and Jesús. Luís Solana was CEO of Telefónica SA from 1983 to 1989 and General Manager of Radiotelevisión Española SA RTVE from 1989 to 1990.

From 1959 to 1965 Javier Solana studied physics at the Complutense University of Madrid . In 1963 he was expelled from the university because of his involvement in the opposition movement against the dictator Francisco Franco . Solana went to the Netherlands . After completing his studies in Great Britain , he lived in the USA for a long time on a Fulbright scholarship. He received his doctorate in 1968 from the University of Virginia , where he then researched and taught until 1971. In the same year Solana returned to Spain, where he a. a. taught as a professor of solid state physics .

Solana is married to Concepción Gimenéz, the daughter of a Franco general . He has two grown children, son Diego and daughter Vega.

After the end of Franco's dictatorship in 1977, Javier Solana was sent to the constituent assembly by the Spanish Socialist Workers' Party (PSOE), of which he had been a member since 1964. Later he was also active as a member of parliament and in the teachers' union within the Union General de Trabajadores union .

In 1982 Solana joined Felipe González's cabinet as Minister of Culture, in 1988 he became Minister of Education and Culture and in 1992 Minister of Foreign Affairs . For a long time he was also the spokesman for the Spanish government.

Other memberships and functions:

On November 30, 1995, Solana was appointed NATO Secretary General. Members of the US Congress protested against this appointment because of his temporary sympathy for Marxism and Fidel Castro . Solana was also known to be an active and prominent opponent of NATO; he was one of the authors of the pamphlet 50 Reasons to Oppose NATO .

During his tenure, Solana expanded the office of NATO Secretary General to include numerous powers that went far beyond passing on instructions from the member states to the military components. This particularly affected military decisions regarding the Yugoslavia conflict. On January 30, 1999, he was given sole decision-making powers over all further military decisions relating to NATO's Balkan operations. The order to start air strikes against Yugoslav targets was given by Solana on March 23, 1999, without a UN mandate. The war began on March 24th.

Solana also served as Chairman of the Atlantic Council during his tenure as NATO Secretary General .

Solana in EU and WEU

Solana's NATO mandate ended in December 1999. He had given up the post of Secretary General two months earlier to take up the newly created office of High Representative for the EU's Common Foreign and Security Policy . At the same time he also became Secretary General of the Council of the European Union in order to ensure a certain continuity in view of the Council Presidency, which changes every six months.

On November 25, 1999, Solana was appointed General Secretary of the Western European Union (WEU).

Solana was responsible for initiating and coordinating the Barcelona Conference in 1995, which marked the beginning of the 27-nation Barcelona Process . The European Neighborhood Policy Treaty confirmed and extended it for a period of seven years (January 1, 2007 - December 31, 2013); In 2008 he was transferred to the Union for the Mediterranean . Solana was in charge of negotiating numerous association agreements between the European Union and Middle East countries. He also worked on various integration agreements with South American countries such as Bolivia and Colombia . Together with the UN Secretary General Ban Ki-moon , the representatives of Russia and the USA and the President of the EU Council, he forms the “Middle East Quartet”. He is considered the architect of the Quartet's Middle East roadmap .

Solana also sought a permanent seat for the EU in the UN Security Council and advocated reform of this body.

In November 2004, Solana supported Great Britain , France and Germany in their request to negotiate a treaty with the Iranian leadership regarding the use of nuclear enrichment material. The EU announced through Solana that it hoped to avoid another "American-Iraqi type of invasion" through this and future negotiations.

Not everyone recognized Solana as an EU foreign policy official. This became evident in Israel in July 2004 . Then-Prime Minister Ariel Sharon declined to meet with Solana, saying he would not partner with the EU despite Solana's prominent role in the Middle East Quartet. Solana replied that he and the EU would definitely remain involved in the Israeli-Palestinian peace process, whether Israel liked it or not. On November 26, 2004, Sharon and the Knesset decided to work with the EU within the framework of a neighborhood agreement (ENP) and to withdraw from the Gaza Strip .

On January 21, 2005, Solana met with the newly elected President of Ukraine , Viktor Yushchenko , to discuss the possibility of future EU membership, although the EU Commission had recently announced that it had no plans for Ukraine's accession feature.

In January 2006, Solana mediated the gas dispute between Russia and Ukraine, although the Austrian EU Presidency did not consider mediation to be urgently necessary - according to witnesses, Solana is said to have urged Moscow to give in and it was apparently not clear whether he was acted on behalf of the EU or on its own initiative.

Not least because of these criticisms, there was speculation about the successor to Solana. The talks included the Hungarian Prime Minister Péter Medgyessy and the former French EU Commissioner Michel Barnier .

On June 6, 2006, Solana presented an offer to Iran regarding its nuclear program on behalf of Great Britain, China, France, Germany, Russia and the USA.

On May 17, 2007, Solana received the International Charlemagne Prize in Aachen . He was honored for his services to Europe. However, for the first time in years, the award ceremony was accompanied by protests. The reason for the protest was the allegation that Solana, as NATO Secretary General , gave the order to bomb Yugoslavia during the 1999 war in Kosovo , without a UN mandate having been given.

Solana expanded his position over the course of his tenure. Its growing powers also led to criticism. The EU parliamentarian Elmar Brok warned in February 2004 that Solana “could become too powerful and take on too much responsibility”. Nonetheless, the EU constitutional treaty provided for his position to be significantly upgraded and transformed into a “European Foreign Minister”. The tasks of the Foreign Commissioner and the Presidency of the Council for Foreign Affairs would have been passed on to him.

After the failed ratification of the constitutional treaty, the term “European Foreign Minister” was dropped. The broadly expanded powers originally intended for this office are, however, largely transferred to the EU High Representative for Foreign Affairs and Security Policy ( Article 18 of the EU Treaty ) in the Treaty of Lisbon . As originally provided for in the Constitutional Treaty for the Foreign Minister, the High Representative unites the offices of Foreign Commissioner and Vice-President of the European Commission .

However, Solana did not take over the newly created office and thus resigned from his office with the entry into force of the Treaty of Lisbon (on December 1, 2009). His successor as High Representative for Foreign and Security Policy was Catherine Ashton . He was succeeded as Secretary General of the Council by the previous Deputy Secretary General Pierre de Boissieu .

Solana withdrew completely from politics and took over the management of the “Center for Global Economy and Geopolitics” at the ESADE business school in Barcelona .

Since February 2010 he has headed the foreign policy research department of the Brookings Institution , a conservative American think tank. He is also honorary president of the think tank CIDOB in Barcelona.

He is a member of the European Leadership Network .

On March 14, 2020, it was announced that he was infected with the new corona virus.

Winner of the Manfred Wörner Medal