Felipe González Márquez [ feˈlipe gonˈθaleθ ] (born March 5, 1942 in Dos Hermanas , Seville province ) is a Spanish politician . From December 1982 to May 1996 he was Prime Minister ( Presidente del Gobierno ) of Spain and from 1974 to 1997 General Secretary of the Spanish Socialist Workers' Party ( PSOE) .

At the beginning of his studies, Felipe González was a Christian Democrat and a member of two Roman Catholic organizations. He joined the PSOE in 1962 under the cover name "Isidoro". The PSOE had been illegal since 1939. From 1965 to 1969 González was a member of the PSOE Committee of the Province of Seville. In 1966 he passed the final exam in law and then mainly represented workers in court proceedings. During this time he also taught at the University of Seville . In 1969 he married Carmen Romero , from whom he separated in November 2008.

In 1969 he became a member of the National Committee of the PSOE, from 1970 he was a member of the Executive Commission. He was imprisoned in 1971 for participating in protests against the dictator Franco .

At the Suresnes Congress in France , González was elected General Secretary of the PSOE in 1974. This meant the victory of the young reform wing against the traditionally committed party veterans. In that year González made a long-standing close friendship with Willy Brandt , who promoted the Spaniard. Hans-Joachim Noack called González the “political foster son” of Brandt, Walter Haubrich called the relationship a “political father-son relationship”; González also gave the emotional eulogy for Brandt in 1992. After Franco's death in 1975, González became one of the leaders of the democratic opposition within the “Platform for Democratic Convergence”, which joined the transitional government in March 1976. The PSOE was re-approved in February 1977 and took part in the first general election of the post-Franco era on June 15 . The party won 29.2% of the vote and 118 seats, making González opposition leader in parliament.

He endeavored to transform the Marxist PSOE into a modern socialist party that should appeal to all social classes. In November 1978 González became Vice President of the Socialist International . In new elections on March 1, 1979, the PSOE consolidated its position with 30.5% of the vote and 121 parliamentary seats, but remained an opposition party. González resigned as general secretary at the party congress on May 17, but was re-elected to office at a special congress with 85.9% of the delegate's votes.

Term of office as head of government

1982 - The hope of the young Spanish democracy

In the elections of October 28, 1982, in which the ruling party alliance Unión de Centro Democrático collapsed with only 12 seats, the PSOE won 48.3% of the vote and 202 of 343 parliamentary seats. On December 2, González succeeded Leopoldo Calvo-Sotelo as Prime Minister. The new government raised high hopes among the Spanish population for political change. Under his government compulsory schooling was introduced (with free school attendance for all Spaniards up to the age of 16), university education was promoted, a reform of social insurance was initiated and abortions were partially legalized against the resistance of the Catholic Church .

González also pushed for liberalization and restructuring of the Spanish economic order. On February 23, 1983 a law was passed to nationalize Rumasa , a corporate conglomerate on the verge of bankruptcy, in order to safeguard the savings of investors and the jobs of 60,000 employees. This decision sparked violent protests and litigation, which in 1986 was decided in favor of the government.

While González had promised to create 800,000 new jobs during the election campaign, the restructuring of the Spanish steel industry led to layoffs, especially in the provinces. When the government took similar measures for heavily indebted port companies, workers went on strike. The Union General de Trabajadores (UGT) union called for a nationwide general strike against the social reforms on June 20, 1985. In the same year the government began to partially or fully privatize 200 state-owned companies and several hundred subsidiaries.

According to CIA reports, in 1984 "González [...] agreed to the formation of a mercenary group to fight terrorism outside the law." The CIA further reports that "the aim of the GAL is to assassinate the leaders of the long disarmed and disbanded underground organization ETA in Spain and France".

1986 - EU accession and referendum on remaining in NATO

On January 1, 1986, Spain and Portugal became members of the European Community . In the June 22, 1986 elections, the PSOE received 44.1% of the vote and 184 seats. In the same year González supported the retention of his country in NATO in a referendum , which marked a clear departure from the previous positions of his party. A general strike on December 14, 1988 paralyzed the country; Unions and the left wing accused him of moving to the right.

After the fall of the Berlin Wall (1989) González was one of the few European heads of government who welcomed German reunification without reservation . 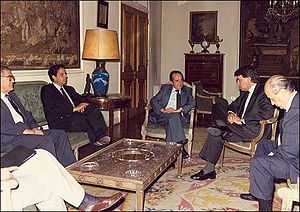 On October 29, 1989, the PSOE again achieved a majority in parliament with 39.6% of the vote. In the elections of June 6, 1993 , she won 159 seats in parliament with 38.8% of the vote and was now dependent on the support of several regional parties from Catalonia and the Basque Country . The economic problems became more evident. During Gonzalez's reign 1982–1996, the Spanish peseta had lost well over half of its purchasing power and around 49% of its value against the Deutsche Mark . The unemployment rate of 25% and several corruption scandals as well as legal violations by the state in the fight against the Basque ETA with the help of the secret organization GAL ultimately resulted in the defeat of his party in the elections on March 3, 1996 . José María Aznar of the Partido Popular became Prime Minister of Spain. González resigned from party leadership in 1997; He kept his seat in parliament until 2000.

After 1996, Gónzalez no longer held any political office, but kept speaking up with comments on the domestic and foreign policy situation. In 2007 he was appointed to the Council of Wise Men on the Future of Europe , which made him its chairman.

In 2016, he played a key role in the overthrow of PSOE chairman Pedro Sánchez by his own party executive.

Felipe González received the Charlemagne Prize of the city of Aachen in 1993 .

In 1996 González received the Grand Decoration of Honor in Gold on ribbon for services to the Republic of Austria . In 2000 the European Academy of Yuste honored him with the European Prize Karl V.

On June 18, 2011, González was awarded the Point Alpha Prize , which recognizes his services to the unity of Germany and Europe.