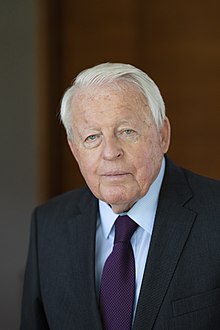 As the son of an iron caster , Franz Vranitzky grew up with a sister in simple circumstances in the working class. The family lived in the 17th district of Vienna, Hernals . He attended the Hernalser Gymnasium Geblergasse and then studied business administration at the University of World Trade in Vienna . During his studies he worked as a tutor for Latin and English and as a construction worker . In 1960 he completed his studies with a degree in business administration . He has been a member of the SPÖ since 1962. As a teenager, Franz Vranitzky was a member of Austrian basketballNational team and failed in 1960 in qualifying for the XVII. Summer Olympic Games in Rome .

He began his professional career in 1961 at Siemens-Schuckertwerke . In the same year he switched to the Oesterreichische Nationalbank . In 1969 he received his doctorate in commercial science. In 1970 he became an economic and financial policy advisor to Finance Minister Hannes Androsch in the government of Federal Chancellor Bruno Kreisky .

During the election campaign for the 1986 federal presidential election , Chancellor Sinowatz vehemently opposed the ÖVP candidate , Kurt Waldheim . When Waldheim was elected on June 8th, Sinowatz resigned as a result of the events of the so-called " Waldheim Affair " and recommended Vranitzky as his successor.

After his appointment as Federal Chancellor, Vranitzky initially continued the coalition government ( cabinet Vranitzky I ) with the FPÖ .

When Jörg Haider was elected federal party leader of the FPÖ on September 13, 1986 with the help of the German national wing of the party in place of the moderate Norbert Steger (Steger had been since 1980 ), Vranitzky ended the coalition on September 14 and the National Council was dissolved.

From the following elections to the National Council on November 23, 1986 , the SPÖ emerged again as the strongest party and in 1987 Vranitzky formed a new coalition cabinet with the ÖVP as a coalition partner ( Vranitzky II cabinet ). In spring 1988 the former Chancellor Sinowatz announced his resignation as party chairman and in May 1988 the delegates of the SPÖ party congress elected Vranitzky as the new chairman of the ruling party.

In terms of foreign policy, he was confronted with the ongoing discussion about the war past of Federal President Kurt Waldheim and the resulting international isolation of Austria. He also repeatedly took on representational tasks abroad that would otherwise have fallen to the Federal President. He succeeded in normalizing relations both with the USA , which had put Waldheim on the watch list in April 1987 , and with Israel , which withdrew its ambassador after Waldheim was elected.

Domestically, he made sure to keep his distance from Jörg Haider and his politics, which he complained about as "exclusion".

Vranitzky's speech to the National Council on July 8, 1991 was remarkable. In it he not only relativized the "victim thesis ", which had been upheld by the official until then , that Austria was the first victim of the power development of the German Reich under Adolf Hitler (see also "Anschluss " ), But also confessed the complicity of the Austrians in the Second World War and its consequences:

"There is shared responsibility for the suffering that, although not Austria as a state, but citizens of this country have brought upon other people and peoples."
“We are committed to all deeds in our history and to the deeds of all parts of our people, both good and bad; and just as we claim the good for ourselves, we have to apologize for the bad - to the survivors and to the descendants of the dead. "

The focus of his foreign policy, especially after the collapse of the "Eastern Bloc" , was the intensification of contacts with the Eastern European states as well as the preparation and implementation of Austria's accession to the European Union , whereby he worked closely with the then Foreign Minister and Vice Chancellor Alois Mock (ÖVP). After the referendum on June 12, 1994 , in which 66.64% of Austrians voted in favor, Austria joined the European Union on January 1, 1995 . After the government coalition ( Cabinet Vranitzky IV) Had broken up at the end of 1995, there were early elections. Once again, the SPÖ emerged from the election as the party with the most votes. In March 1996, the Vranitzky V cabinet was sworn in , another coalition government with the ÖVP under the leadership of Wolfgang Schuessel , who had been a member of the previous coalition governments since 1989 as Minister of Economics and since May 1995 as Vice Chancellor and Foreign Minister.

In January 1997 Vranitzky resigned as Federal Chancellor and also as Federal Party Chairman. Viktor Klima became his successor in both offices . 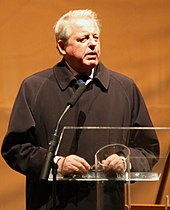 After retiring from Austrian politics, he initially became the OSCE Special Representative for Albania from March to October 1997 .

In June 2005, he donated one of his kidneys to his wife Christine, who had chronic kidney failure .

In 2006, during the National Council election campaign, he acted as chairman of the personal committee for the SPÖ top candidate Alfred Gusenbauer . Vranitzky is currently available to his own party for several activities, including a. as part of the quarterly "Vranitzky Colloquia" organized by the Working Group for Scientific Economic Policy (WIWIPOL), in which he identifies and discusses economic policy issues with future potential for Austria and Europe together with invited celebrities from science, culture and politics.

Since June 1, 2010, Vranitzky has been Vice-Chairman of the InterAction Council , a think tank of former heads of state and government founded in 1983 by former Japanese Prime Minister Takeo Fukuda , which is dedicated to international cooperation in the areas of peace and security, the global economy, and development and the environment.

Shortly before the National Council election in Austria in 2006 , a statement by investment banker Wolfgang Flöttl was published, which he had made on the sidelines of a questionnaire about his previous work for BAWAG PSK and his involvement in the BAWAG scandal . According to this, he paid Vranitzky one million shillings (approx. 72,000 EUR) in 1999 for telephone advice. Vranitzky confirmed the payment that had been made for consultations on the then imminent introduction of the euro . As part of the National Council's bank investigation committee in 2007, Flöttl testified in May 2007 that he had received this payment under pressure from the then BAWAG General Director Helmut Elsnerand made without a written contract, but did not ask for anything in return. On the part of the political opponents, it was assumed that this payment was an “indirect party financing” of the SPÖ, which Vranitzky rejected.

Federal Chancellor of the Republic of Austria

Federal party leader of the SPÖ