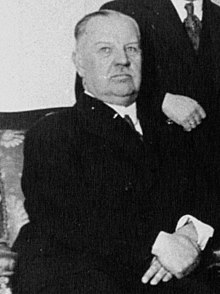 Carl Vaugoin laying the foundation stone for the barracks in Pinkafeld on July 21, 1929

Born as the son of a jeweler and a Viennese city councilor, Vaugoin aspired to become a professional officer after completing his year as a one-year volunteer in 1894, but was found unfit for military service and decommissioned in 1899. Since 1898 active in the accounting service of the Lower Austrian provincial government , he joined the Christian Social Party (CS) almost at the same time , which he represented on the Vienna City Council from 1912 to 1920 .

During the First World War , Vaugoin headed two stage train workshops after a short front-line deployment and was most recently Rittmeister. His military service in the quiet alpine town of Scheibbs far from the front later earned him the nickname "General Scheibbs". From 1918 to 1920 he was Vienna City Councilor, from 1920 to 1933 a member of the National Council , from 1921 to 1933 (except for the period from October 7, 1921 to May 30, 1922) in a total of 15 cabinets, Defense Minister , from 1929/30 also Vice Chancellor and from September to December 1930 Austrian Federal Chancellor .

As Defense Minister, it was important to Vaugoin to convert the people's armed forces , which had initially been on the left after 1918, into a politically neutral federal army . Vaugoin acted as a sponsor of section head Robert Hecht , who designed the legal structure for the coup d'état of 1933 ( war-economy enabling law ). In 1930 Vaugoin succeeded Ignaz Seipel as federal party leader of the Christian Social Party.

Vaugoin initially supported the authoritarian course of the corporate state as Army Minister, but due to increasing differences with the Heimwehr he was deported to the Austrian Federal Railways in 1933 and thus politically disempowered.

The Nazis survived Vaugoin in forced stays in central Germany and Thuringia and from 1943 in Litschauer "evasive hospital." Paralyzed due to an illness, he spent the last months of his life in the Dürnstein monastery .

Federal Chancellor of the Republic of Austria